One of ‘Teen Mom 2’s OG stars is leaving the show! Chelsea Houska, who is currently pregnant with her fourth child, is ending her run on the series after 10 seasons.

Chelsea Houska will no longer be on Teen Mom 2 after the show’s tenth season, which is currently in the midst of airing on MTV. The Ashley’s Reality Roundup was first to report that news of Chelsea’s exit from the series. Chelsea reportedly concluded her filming when she taped the virtual reunion for season 10 on Oct. 29, according to the site. The Ashley reports that Chelsea first made production aware of her decision a few weeks prior, but hadn’t told her fellow cast members until the reunion announcement.

After the news broke, Chelsea’s dad, Randy Houska, took to Twitter to seemingly confirm that the story was true. “Well kids that’s a wrap,” he wrote. “Been a fun run. What’s next? Seriously tho, it’s been a part of [Chelsea]’s entire adult life. We all expanded our horizons and grew up as people. #NoRegrets. See y’all on the flip side.” HollywoodLife has reached out to Chelsea, as well as MTV, for confirmation.

Chelsea made her MTV debut on 16 & Pregnant in 2010. She was then cast for Teen Mom 2, which premiered in Jan. 2011. At the time, Chelsea had just given birth to her daughter, Aubree, and was in a tumultuous relationship with her then-boyfriend, Adam Lind. 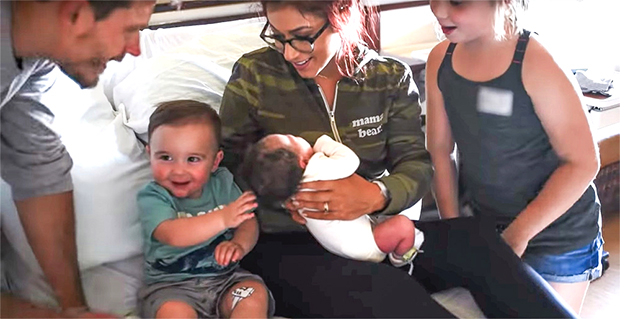 The 29-year-old finally left Adam in her past when she met Cole DeBoer in 2014. They wound up getting married and having two kids (Watson, 3, and Layne, 2,). Earlier this year, Chelsea revealed that she was pregnant with the pair’s third child, another little girl. Chelsea and Cole’s solid relationship, along with her custody issues with Adam, have been a prominent part of Chelsea’s storyline on Teen Mom 2 over the years.

The tenth season of Teen Mom 2 just premiered in September. The show currently stars Chelsea, Kailyn Lowry, Leah Messer, Jade Cline and Briana DeJesus. Jenelle Evans was part of the series for nine and a half seasons, but was fired from the show in 2019 after her husband, David Eason, shot and killed their family dog.