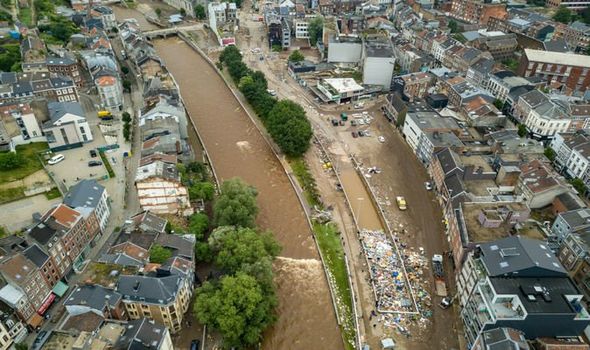 Climate scientists were shocked by the scale of the floods. Many factors contribute to flooding but a warming atmosphere, caused by climate change, makes extreme rainfall more likely.

Hundreds of people died in Canada last month during an unprecedented heatwave that smashed temperature records.

At least 486 sudden deaths were recorded in British Columbia when temperatures soared to a record 121.3F (49.6C). China’s record rainfall Dozens of people in China died last week when almost a year’s worth of rain fell in a few days.

At least 25 people were killed in Zhengzhou, after the total rain exceeded 24 inches in a day.

The city averages 25.4 inches each year.

Heavy downpours and thunderstorms caused severe flash flooding in parts of London. Climate and infrastructure experts have warned that London, like many other large cities, is not ready for climate change. The Kuwaiti city of Nuwaiseeb last month recorded what is believed to be the highest temperature in the world so far this year, at 127.7F (53.2C).

Several countries in the Middle East, including Iran, surpassed 122F this summer.

Swathes of India have been ravaged by floods and landslides following a deluge of heavy monsoon rains that have claimed at least 164 lives.

While monsoons are notorious in India, studies suggest that the climate crisis is making them worse.

The UN food agency has warned that thousands of families in southern Madagascar are on the edge of starvation as the country faces its worst drought in four decades.

World Food Programme director David Beasley said: “This is not because of war or conflict, this is because of climate change.”

One of Siberia’s coldest regions, Yakutia, is wrestling with a third straight month of high temperatures, along with devastating wildfires which have now burnt more than 1.5 million hectares of forest. Global warming has seen temperatures soar.