The Good Life gone wrong: Woman confesses she and her husband nearly broke up 10 TIMES after quitting jobs as vets to live off-grid in Wales – and admits she was tempted by the idea of ‘a nice place and plenty of money’

A mother-of-four living off-grid has admitted the challenges of day-to-day life meant she and her husband tried to split ‘ten times’ when they first embraced the simple life.

Emily Powell, 44, who goes by Em, and her husband Keith Powell, 53, bought 50 acres of land in the Black Mountains in Wales ten years ago, for £136,000, and welcomed Ben Fogle to their home for a new episode of New Lives in the Wild, which airs Tuesday at 9pm on Channel 5.

Over time, the couple, who now have four boys, built a home for themselves as their family grew, rely on a £4,000 in a hydro-electric pump to provided them with electricity and work the land for vegetables.

But Emily admitted the beginning of the adventure had been ‘polarising’ for the couple and that she wanted to trade her life in the wilderness for a more comfortable home with more money, but knew it would end her relationship with Keith. 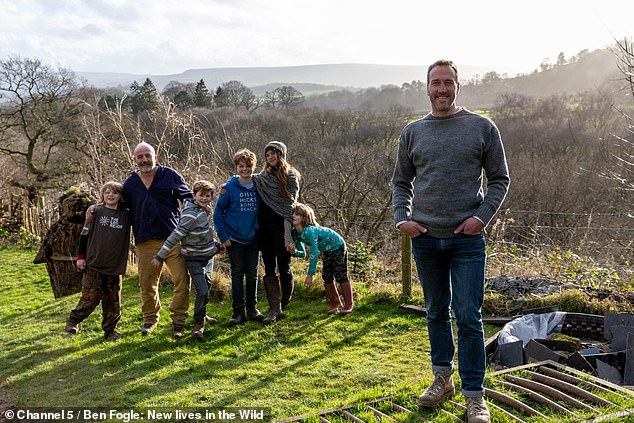 Ben Fogle met with Keith Powell, 53, his wife Emily, 44 and their four sons in Wales for a new episode New Lives in the Wild, airing on Tuesday at 9pm on Channel 5

The pair first met at veterinary school 25 years ago and were friends for a long time before becoming a couple in 2007.

In 2009, they decided to quit their jobs as vets and buy the plot of land in hopes of building a family home.

They now have four boys Jesse, Reuben, Will and Seb, who were on half term when the show was filmed.

While working her vegetable patch with Ben, Emily admitted looking after four kids and the house had sometimes been challenging for the couple. 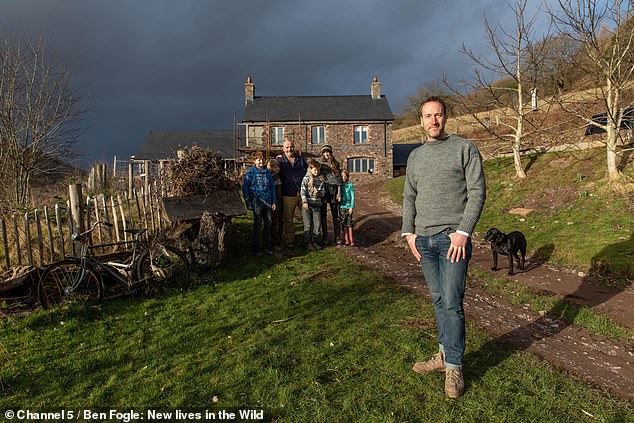 The presenter was deeply impressed with the house, pictured, that the Powell had built using wood they cut from local trees and other local materials

‘I think Keith and I tried to break up about ten times,’ she said, laughing.

‘Keith and I were very polarised at the beginning of this. I was focused on getting the engine room going, he was trying to get the money in, do the building, do all the big leg work.

‘You both try to do such different jobs, there’s not common ground and that puts a massive amount of tension on.

‘There were times where I thoughtL “We could sell all this, get a nice place, earn plenty of money”. But I think it would have killed both of us. I think it’d been the end of everything for us,’ she added.

She explained to Ben that the land on which she and Keith live has become an important part of their relationship.

‘When you engage with a piece of land it’s another member of the family,’ she said. ‘It’s not just me and Keith in this relationship. It’s me, Keith, the boys and this [land].

‘There’s always been a sense of “OK, this isn’t just about us, it’s about a lot more. So we push on through, we climb that mountain and see what happens,’ she went on. 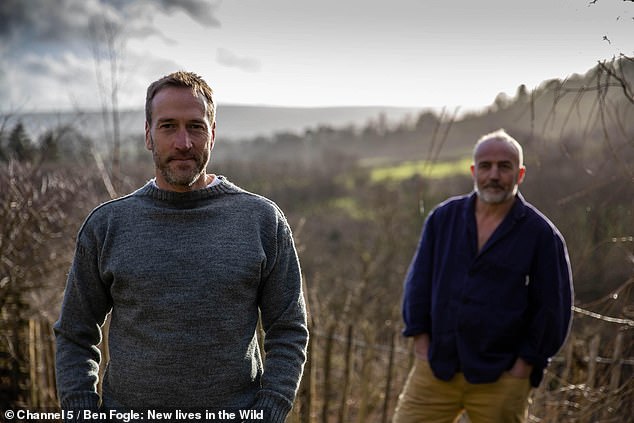 Keith, who used to give veterinary classes around the world, said he was ‘content’ with his life in Wales

Keith used local trees and other materials to build the couple’s impressive house, and the wood beams that frame the structure deeply impressed Ben, who said it looked like a cathedral.

But humble Keith told Ben he designed the whole house on a ‘fag pack.’

‘Of all the wild structures I’ve visited over the years, it’s completely unique, I haven’t seen one like this because it’s just tethering on the edge of total normality, and yet it’s off the grid and it’s built with love, with local materials. There’s something very exciting about the house.’

The presenter stayed in his own cabin just by the house, which was equally as cosy as the rest of the build.

‘They can be really proud of what they’ve achieved here,’ the presenter said to the camera.

Ben then had a cup of tea with Emily and Keith in the impressive barn Keith also built. 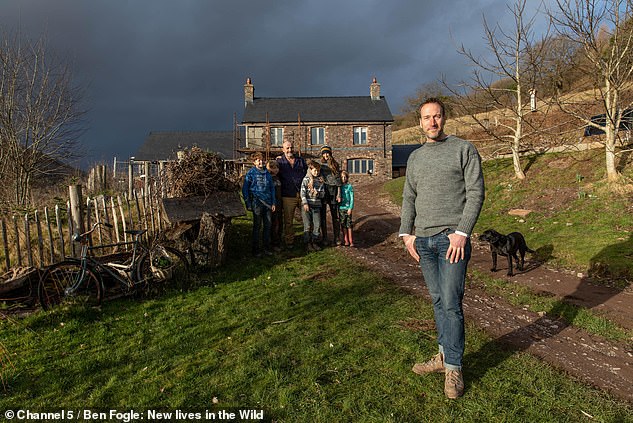 The family, pictured, are planning to plant 122,000 trees on a hill near their house to give back to the land after cutting trees to build their home

He revealed he built it by cutting trees and floating them down to the river until they got to a place where they could be lifted with a machine.

Keith explained to Ben that the scale of the high structure had been dictated by the size of the trees, saying the wood is the most beautiful material and the most cost-effective way to build.

‘We have to live as in harmony with nature as we can,’ he added.

‘If you’re going to do it once, you might as well make it really impressive, have a good pop at it,’ Em said.

Financially, the couple said they don’t have much money, but live within their means and don’t have debt.

‘We’re actually working and living somewhere like this, which is a full time job in itself. It takes that energy to keep this place running,’ Em added.

‘I was just starting my acupuncture business, two days a week. That’s just gradually reached a level that I can cope with with everything going on.’

Keith said he and Emily decided to go off-grid for environmental reasons and that they hoped the situation would improve if everybody did their bit to help the planet.

When Ben asked him if he was content with his life, Keith said: ‘I love that word, content. I think it’s my favourite word. I am content,’ he said.

Keith used to travel around the world as what Ben jokingly called a ‘veterinary Indiana Jones’ teaching locals in Ethiopia, Afghanistan and other regions how to care for animals.

In order to build his house, Keith had used trees of the land, but told Ben about his plan to give back by planting 122,000 on one of the Black Mountains hills through the charity Stump Up For Trees, which aims to plant one million trees in the area.

‘The  ambition of that project is pretty extraordinary,’ Ben said.

‘I love the human condition. The vast majority of people are great, they deeply care and they’re frustrated because it’s difficult to actually find somewhere to place your worry or somewhere to do something physically,’ Keith told him.

Speaking about his relationship with Em, he said: ‘We’re very different, we compliment each other.

‘Em has got all the imagination that I lack. I’m everything that you can see and touch and feel and Em is everything else.

He jokingly added his wife is ‘thought-provoking, foxy, and fertile.

‘You seriously have to be careful where you’re aiming him, once you set him off there is no stopping. His creative energy is amazing,’ she added.

Ben Fogle: New Lives in the Wild airs on Tuesday at 9pm on Channel 5.