CRAIG BROWN: George V was a stuffy bore, but one of our best monarchs

A stuffy bore who hated everything from dining out to the ‘effeminate’ French language… So how come George V became one of our best ever monarchs?

Who could have imagined a biography of King George V would share its name with an album by Rod Stewart?

Of course, the title is a bit of a tease. For years, the Queen’s grandfather has been regarded as deadly dull. Even his official biographer, Harold Nicolson, privately considered him ‘a stupid old bore’.

Tommy Lascelles, latterly the King’s assistant private secretary, agreed that ‘He WAS dull, beyond dispute…’ before adding, in a phrase that gives this book its title, ‘but my God, his REIGN (politically and internationally) never had a dull moment’. 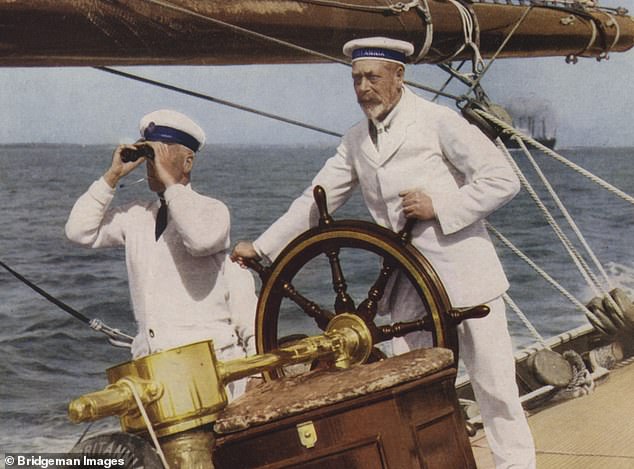 George V (above, right) mistrusted anything that smacked of the 20th Century: dining out, the French language and women who smoked and/or painted their fingernails

I suppose you could argue that George V carried his dullness to such a peak that it became interesting.

He mistrusted anything that smacked of the 20th Century, disapproving of, among much else, dining out, the French language (‘effeminate’), women who smoked and/or painted their fingernails, foreign travel (‘I must say I don’t care about going abroad, I never did’), short dresses and modern dance.

After his loyal wife, Queen Mary, had asked a lady-in-waiting to raise the hem of her skirt by an inch or two, the King declared it was too short and made her lower it again.

His pleasures were more limited. Nicolson complained that, for 17 years before he became King, ‘he did nothing at all but kill animals and stick in stamps’.

He was a pedant, starting and ending each day by tapping the barometer and forever counting up the steps he walked, the hands he shook, the decorations he conferred, the birds he shot. 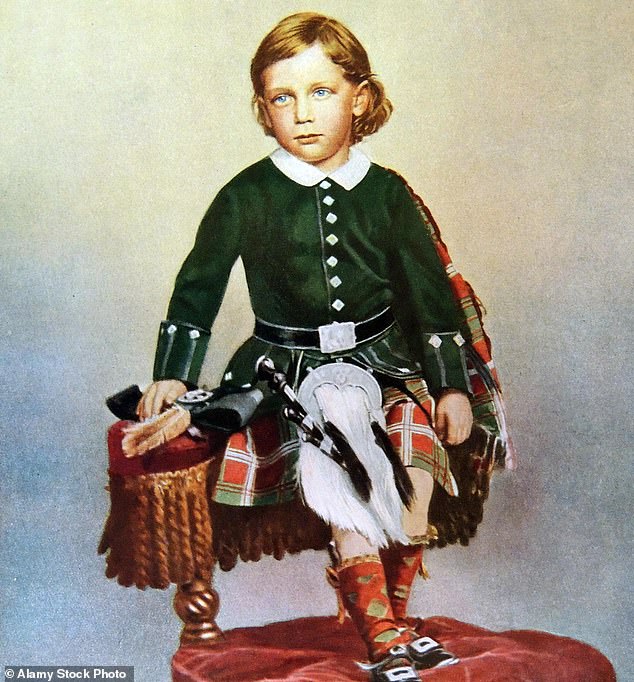 He once managed to shoot 1,000 birds on a single day. Even he thought this might be too many. ‘Perhaps we went a little too far today,’ he concluded on the way back.

His diary lacks any sort of colour or interest. Even his sympathetic biographer found it heavy-going. ‘No one could describe the diary as a lively or enjoyable read,’ she admits.

He was a philistine, deeply suspicious of painters and authors (‘People who write books ought to be shut up’). Attending the opening of the Tate Gallery in 1926, he spotted a Cézanne and called over to his wife: ‘May! Here’s something to make you laugh!’

Eight years later he paid his first visit to the National Gallery and waved his stick at another Cézanne, declaring: ‘Turner was MAD, my grandmother always said so!’

He protected his stuffiness with a fierce temper. When a footman accidentally dropped a tray, he shouted: ‘That’s right – break up the bloody palace!’

In the 1920s, Queen Mary wanted to learn some new dance steps, but he exploded with rage at the idea.

Evelyn Waugh once observed that the presence of Royalty was ‘as heavy as thunder in the drawing room’. 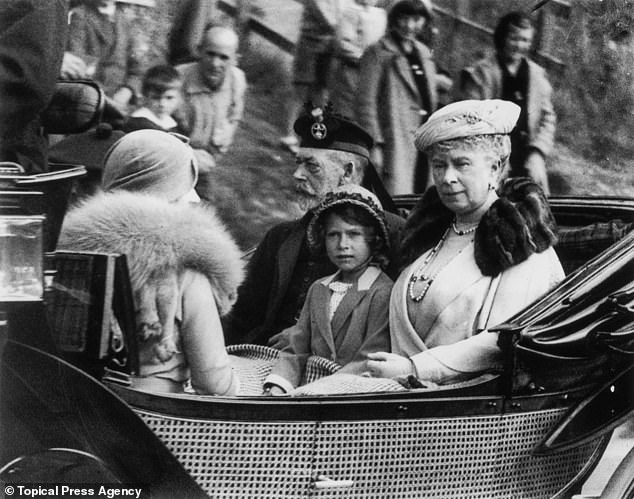 I suppose you could argue that George V (above, left) carried his dullness to such a peak that it became interesting

All these stories seem to confirm the established portrait of King George V as stuffy and irascible.

While not attempting to deny that these were certainly sides of his character, Jane Ridley argues, with a fair degree of success, that there was much more to him. ‘George V was an ordinary man who achieved extraordinary things.’

As our own Queen, his granddaughter, has shown over the course of her reign, finding oneself in such a peculiar position, there is something to be said for daring to be dull.

Yet somehow he managed to remain a stable, even comforting, presence all through the First World War, the fight for Irish Home Rule, the Russian Revolution, the suffragette movement, the General Strike, the Great Depression and the rise of socialism.

As Ridley points out, during the quarter-century of his reign, no fewer than 13 European monarchies fell, yet somehow the British monarchy survived. Much of this was due to George V’s doggedness, and his refusal to be driven off course.

His prime ministers tended to underrate him. Asquith once observed that ‘the poor little man isn’t up to his position’. Lloyd George treated him with condescension, calling him ‘my little German friend’, and often not even bothering to reply to his letters.

After staying at Balmoral, Lloyd George said he was ‘a very jolly chap but thank God there’s not much in his head’. He later admitted that he had treated the King abominably.

For all his bluff anti-intellectualism – or perhaps because of it – on the international and political stage, George rarely put a foot wrong. Ridley argues, for instance, that he had a much sharper understanding of the Irish question than Asquith ever did.

His lack of imagination proved a boon: in a fast-changing world he always remained the same, and his nation came to look on him as an anchor. His puritanism, and related mistrust of fun, art and entertainment, also gave him a sense of duty.

Over the course of the Great War he made 400 troop inspections and paid 300 hospital visits. Ridley argues that in this way he revolutionised the institution of the monarchy, turning it into ‘a service monarchy, making direct contact with the people, similar to the institution it is today’.

Beneath his stuffy exterior lay a ruthless instinct for self-preservation. This was most evident in the way he treated his looky-likey cousin Tsar Nicholas after the Russian Revolution.

Though he once described ‘dear Nicky’ as the best man he knew, he was adamant in refusing him and his young family refuge in Britain, lest his own position be placed in jeopardy.

He cannot be held responsible for their assassination, but there was something undeniably icy about his lack of concern.

He was ungenerous to other monarchs, too.

When Queen Wilhelmina of the Netherlands asked him to visit her country, which seemed to be on the verge of revolution, he declared: ‘I am not going to be used to bolster up monarchies which are shaky, that is not my metier.’

Though she concludes that George was ‘one of the most thoughtful and one of the most successful monarchs in British history’, Ridley is not blind to his failings, not least his damaging treatment of his eldest son, the future King Edward VIII.

Someone once said that ‘the House of Hanover produce bad parents. They are like ducks, they trample on their young’. Is this still true today?

Certainly, George trampled on the troubled Edward, pouring scorn on his every move towards independence. Once, when Edward was told that his father might be dying, he rushed back to be by his bedside.

King George greeted him by half-opening one eye and rasping: ‘Damn you, what the devil are you doing here?’ The intensity of his disapproval resulted in a rift that never healed.

‘After I am dead, the boy will ruin himself within 12 months,’ George said to Baldwin. This prediction turned out to be eerily true, but he himself was at least partly to blame.

Nor was he much kinder to his gentler, more earnest and dutiful younger son, the future George VI, who would struggle with his stammer, only to have his father shout, impatiently: ‘Get it out!’

His daughter-in-law, the Duchess of York, who later became Queen Elizabeth, the Queen Mother, was, by all accounts, fond of George V, yet she warned her husband against following in his father’s footsteps.

‘Remember how your father, by shouting at you and making you feel uncomfortable, lost all your real affection. None of his sons are his friends, because he is not understanding & helpful to them.’

In old age, King George V developed a particular fondness for his little granddaughter Elizabeth. At Buckingham Palace he would train his binoculars on her home, 145 Piccadilly, and watch the young Princess wave to him from her window.

‘I pray to God that my eldest son will never marry and have children, and that nothing will come between Bertie [the future George VI] and Lilibet and the throne,’ he said, shortly before he died.

Once again, his instincts proved true. Deadly dull he may have been, but he could also be deadly accurate.