Agriculture Minister David Littleproud rallied with alcohol lobby groups to push back against a pregnancy warning label, with documents showing his involvement in a campaign prompting a push for a Senate inquiry.

Correspondence unveiled in Parliament included a letter Mr Littleproud sent last year to the chief executives of Australia’s largest beer, wine and spirits producers along with peak industry bodies, detailing how he fought against the food standards body’s recommended pregnancy warning labels and his disappointment when he was overruled. 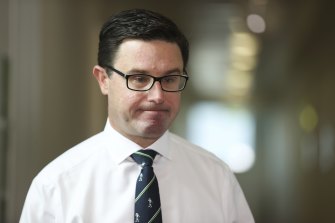 In separate letters, Mr Littleproud, who sits on the food ministers’ forum that decides on labelling, urged alcohol lobbyists to contribute to a review of legislation governing Food Standards Australia and New Zealand, which he held up as an opportunity to overhaul the regulatory system.

“I am seeking your input to ensure that the views of businesses in the agriculture and manufacturing sectors are well represented through the process,” he wrote. 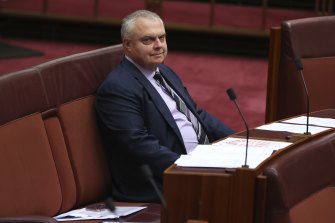 Centre Alliance senator Stirling Griff obtained the letters under Senate rules and called for a Senate inquiry to probe “the conduct of ministers with regards to FSANZ”.

“This smells of interference,” he said of the letters.

“Cosy relationships between governments and lobby groups are a cancer on our democracy,” Senator Griff said. “We need transparency to hold politicians and lobbyists to account.”

In a speech delivered in the Senate on Tuesday, Senator Griff said the proposed inquiry would also investigate the circumstances of the departure of FSANZ chair Robyn Kruk, who left in April, and chief executive Mark Booth, who left in August.

This would determine whether Mr Littleproud had “removed statutory officers at the behest of the alcohol industry” and “if the line was crossed”.

Food Minister Richard Colbeck’s industry correspondence was also tabled in the Senate, including a joint letter from Alcohol Beverages Australia, the Australian Beverages Council, the Australian Food and Grocery Council and the National Farmers’ Federation, calling for FSANZ to be stripped of its powers.

The letter called for the FSANZ board to include more industry representatives and responsibility for food regulation be taken away from the Department of Health and moved to Mr Littleproud’s Agriculture portfolio.

But, he wrote, the federal government had been voted down by New Zealand, Victoria, Queensland, Western Australia, Tasmania, the ACT and the Northern Territory at the food ministers’ forum in July 2020, which ultimately approved the label and ordered producers to roll them out by 2023.

“I am disappointed with the decision of the forum,” Mr Littleproud wrote, saying the pregnancy warning label outcome “has highlighted to me that more needs to be done to ensure the views of industry are considered through the policy development process”.

Fascinating answers to perplexing questions delivered to your inbox every week. Sign up to get our new Explainer newsletter here.