After the end of lockdown, everything old is new again. First, there’s the matter of getting dressed. The lockdown track pants must be replaced by a new pair of jeans, otherwise known – to quote the musician Bob Evans – as “leg prisons”.

You’ll say I’ve put on weight, but it’s not that. Well, not entirely that. Why did anyone think that jeans should be as tight as a tourniquet, as if the task of a pair of pants was to prevent the spread of poison from a snake bite? 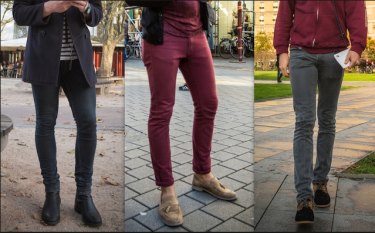 How tight are your jeans post-lockdown?Credit:AusSMC

I sit on my bed and pull the wretched things on, wriggling my bum in order to insert myself in the bandage, before trying to do up the zip. Really, it would be easier to bring together both sides of the National Party.

The sloppy joe is replaced with an ironed shirt. The tie? I can’t bring myself. Maybe the gentleman’s tie is one of those things which has been permanently defeated by COVID-19, like Australian federalism and watching old TV series – we’ve now seen them all.

Then it’s out the door, but now without a mask. I must remember to smile at people I pass on the path. How’s that done again? Apparently, you stretch the corners of your mouth upwards and then bare your teeth. Whoops, I look like the Joker from Batman. Better try that again. I now look like the Cheshire cat from Alice’s Adventures in Wonderland.

The late, great British comedian Jeremy Hardy had this funny line about matrimony. He said marriage was like being placed in a witness protection scheme. “You get all new clothes, you live in the suburbs, and you’re not allowed to see your friends anymore.”

That was lockdown, exactly. The new clothes were formless sacks. I’d been two weeks off ordering a kaftan; another month and I’d have looked like Frank Thring in a muumuu.

And just like Hardy’s witness protection scheme, we weren’t allowed to leave our suburb, while the “list of friends” was whittled down to shouting over the fence at the nearest neighbour.

But now the retraining begins. First up, driving.

Have you noticed that everyone has forgotten how to drive? The roads are chaotic. Lane changes are indicated by lurching suddenly and unpredictably into the adjoining traffic. The Anzac Bridge is like the bumper car concession at Luna Park. Same story: the Sydney Harbour Bridge. Merging is a fight to the death. How roundabouts work is anybody’s guess at the best of times. Now it’s Russian roulette. Spin the wheel and you take your chances.

Everyone has forgotten how to drive. The roads are chaotic. The Anzac Bridge is like the bumper car concession at Luna Park.

Next problem: people have forgotten how to converse. With Zoom, the camera only goes to you if you say something, so it’s better to just sit there on mute. That way no-one can spend time contemplating the calamity that has occurred with your hair.

Not saying a word, however, is a strategy that doesn’t work at the café or the work conference table. Stay silent and you just look like a sullen weirdo.

But conversation is hard, especially when you are not used to it. We don’t want to talk endlessly about COVID-19, yet nothing much of interest has happened in our tiny, constrained lives.

Even TV shows, once a staple of conversation, offer little help. Once you’ve done a few months of lockdown, it’s no longer, “Oh, we caught up with that terrific old Danish series about politics”. That was months ago. Now it’s, “Have you seen Below Deck, the reality show about the young, single crew members of a luxury yacht, and their various shenanigans? It’s fabulous! I can’t get enough! That Captain Sandy is a real leader!”

Your conversational partner then looks away hoping to find someone more sensible with whom to converse.

Soon they realise there is no one with anything better to offer. Everyone is bent double, scrambling around in the very bottom of the televisual barrel.

At work, you try to remember how the equipment works. You struggle to recall the name of the person who works across the way. You acclimatise to the idea that a sandwich and coffee cost money, rather than just being fetched free from your kitchen.

And you realise, with a shudder of fear, that the boss can now actually see whether you are working.

Yet, despite all the challenges, you somehow endure the day.

Back at home – should you survive the drive home across Sydney’s various bridges – you might realise, like me, that there’s still a list of household tasks that need completing.

Oh, I know others spent lockdown knocking off the tasks, but I didn’t want to risk a trip to the hardware store. Instead, I’ve left all repairs to This Glorious Time of Freedom [TM Dominic Perrottet].

I now have to confront a leaking toilet cistern, a lawnmower that needs new blades, a laundry sink that has wiggled free from its moorings, and a plank of flooring that groans every time you step on it.

I won’t be able to go out for weeks, not with all these repairs to finish.

And, strangely enough, I don’t seem to mind.

In need of some good news? The Greater Good newsletter delivers stories to your inbox to brighten your outlook. Sign up here.