Ever get the feeling you've been cheated? Johnny Rotten's famous last words at the Sex Pistols' final gig are infinitely adaptable in showbiz. This week, thanks to filmmaker Peter Jackson and 56 hours of previously unseen footage of the Beatles in their twilight days of January 1969, they suddenly apply to the greatest story in pop.

Look, here's John and Paul gleefully jiving in each other's arms. Here's Yoko and Linda sharing a chummy chat. Here's Ringo in shocking pink finery, clowning about juggling drumsticks. And there's Beatle George smiling cheekily, a lot, at everything and everyone. 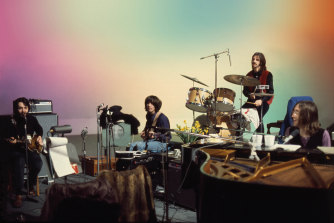 In the original film, the joyful, sometimes slapstick element of the Beatles' chemistry was largely confined to the edited rooftop concert footage (which Jackson has promised to reinstate in full). That historic moment aside, the most often cited sequences from Let It Be involve McCartney trying in vain to elicit a stony-faced Lennon's enthusiasm to perform live again, and then bickering with Harrison over guitar parts.

Here, in the first five-minute glimpse of Get Back, the playful, all-for-one spirit of A Hard Day's Night and Help is everywhere. "We're bloody stars, you know," Lennon warns engineer Glyn Johns in his best satirical Scouse. Silly walks and dances rule. Cups of tea are liberally hoisted.

What we learn is that even in the throes of their "discontent", being in the Beatles was a whole riot of pin-striped and frilly-shirted fun in 1969. Combined with superior sound and dazzling Carnaby Street colour, the experience so far is everything Jackson promised when the project was announced two years ago.

"I was relieved to discover the reality is very different to the myth," the Lord of the Rings director said in a press statement at the time. "Sure, there's moments of drama — but none of the discord this project has long been associated with. Watching John, Paul, George and Ringo work together, creating now-classic songs from scratch, is not only fascinating — it's funny, uplifting and surprisingly intimate."

McCartney and Starr duly echoed his sentiments at the time, although it's fair to note their rewriting of the Beatles' legacy — even with the approval of widows Yoko Ono and Olivia Harrison — has attracted its share of dissent from purists since Lennon and Harrison departed (in 1980 and 2001 respectively). 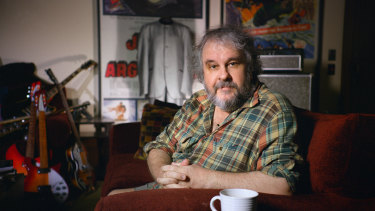 Peter Jackson said 56 hours of previously unseen footage of the Beatles in their twilight days of January 1969 revealed a different story to that captured in 1970 documentary Let It Be.

In 2003, McCartney realised a long-held dream to release Let It Be… Naked, an album closer to his original intentions than the product Phil Spector over-produced, at Lennon's instigation, back in the day. Critical reception was mixed, with Rolling Stone magazine grumbling that "novices should still get the original".

After decades of promised and then mysteriously shelved re-releases, the original Let It Be movie isn’t likely to make it back into circulation anytime soon, although any novice with a broadband connection can no doubt find a dodgy transfer somewhere. As pop history continues to be rewritten by the winners, it's ultimately up to fans to decide when they're being cheated.