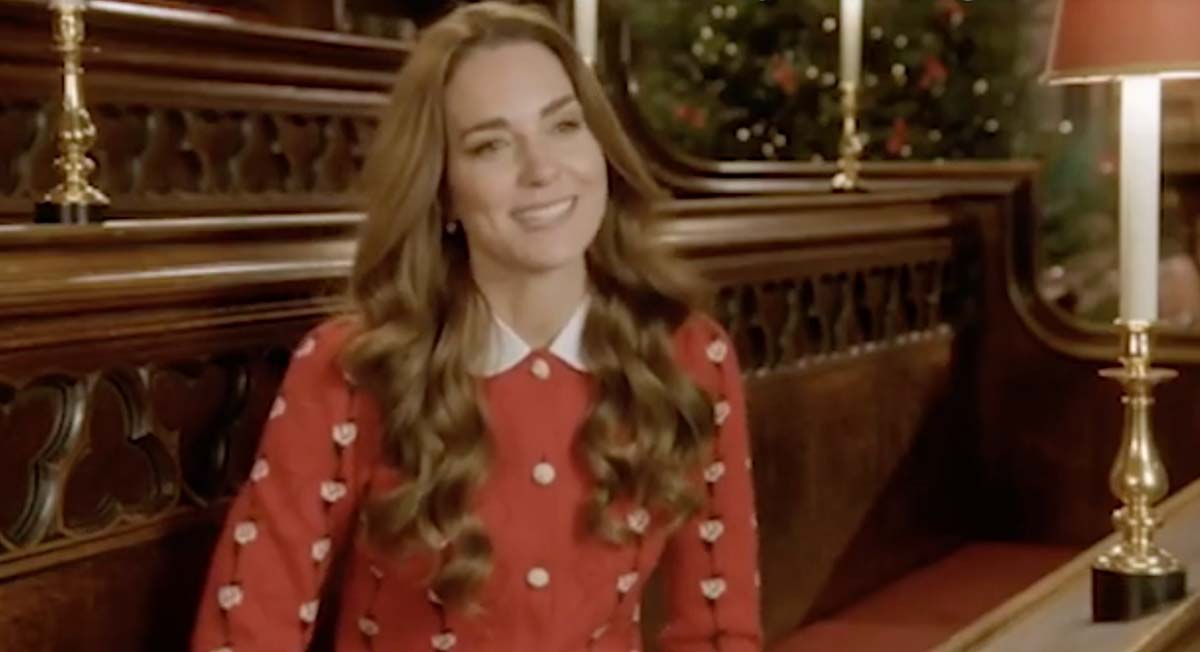 Seeing double! Duchess Kate looked radiant in red during a promotional video for the Royal Carols – Together at Christmas special on Friday, December 17. But it appears as though her spirited sweater was a sentimental style choice.

The $1,788 Miu Miu cardigan, which features rose detailing, a diamond pattern and pearl-encrusted buttons, bore a strong resemblance to one that the late Princess Diana wore in 1981 at the Guards Polo Club at Smith’s Lawn in Windsor. It has since become known as the “black sheep” sweater.

From the similar hue to the dotted pattern and the Peter Pan white collar, royal style watchers wasted no time pointing out the similarities between the Duchess of Cambridge and her late mother-in-law.

While it’s unclear how Duchess Kate styled her look due to the cropped positioning of the concert video, the late royal opted to style her sweater in a casual manner. She paired the knit with denim.

How the Younger Royals Have Honored Princess Diana

This is far from the first time Middleton has taken fashion cues from Princess Diana. Because whether she’s going casual, getting glam or tossing on accessories, the mom of three frequently weaves in a way to honor the late royal, who tragically passed away in 1997.

Most recently, she gave Princess Diana a nod at the No Time to Die premiere in October. For the red carpet, the royal stunned in a glittering gold gown reminiscent of the design Prince William’s mom wore to the premiere of A View to a Kill in 1985.

A few months prior, the duchess paid tribute to the late Princess of Wales on the cover her book, Hold Still: A Portrait of Our Nation in 2020. For the cover of her book, she stunned in a red sweater complete with a pie crust collar that was first made popular by Princess Diana.

Also spotted in the image? Princess Diana’s sapphire ring, which Prince William gave to Duchess Kate when he proposed in 2010. Passing down such a stunning sparkler was exactly what the late royal would have wanted.

Prior to her passing, she penned a “letter of wishes” explaining how she wanted her jewelry collection to be dispersed. “I would like you to allocate all my jewelry to the share to be held by my sons, so that their wives may, in due course, have it or use it. I leave the exact division of the jewelry to your discretion,” she penned.

Don’t forget to tune into the Royal Carols – Together at Christmas special, which is set to air on — you guessed it!  — Christmas Eve.