Housing across the country will become less affordable this year and next even as prices fall, with leading ratings’ agency warning strong wages growth will not be enough to offset the impact of higher mortgage interest rates.

Analysts at Moody’s Investors Service on Monday said house prices would have to tumble by more than 20 per cent just to offset the impact of official interest rates reaching almost 3 per cent by year’s end as financial markets are predicting. 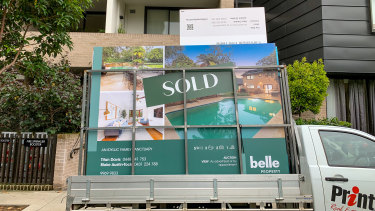 Property prices nationally fell by 0.1 per cent in May, the first monthly drop since September 2020. Median house values in Sydney and Melbourne have both fallen by 1.3 per cent over the quarter.

Moody’s said that in May, Australian households with two incomes needed 26.8 per cent of their monthly income to meet the repayments on a new mortgage loan. In January, they required 25.7 per cent.

There are large differences across capital city markets. The least affordable is Sydney, where households needed 37 per cent of their income to make their loan repayments, in Melbourne they needed 29.8 per cent while in Perth they required just 16.3 per cent.

Repayment levels in all capitals except Perth are now above their 10-year average.

According to Moody’s analysts, affordability will not improve even as house prices fall because increasing interest rates will drive up mortgage repayments.

“We expect housing prices to decline over the rest of this year and into 2023 as rising interest rates
weigh on property market sentiment,” they said.

“Based on our assessment of different housing price and interest rate scenarios, we expect that prices will not decline to the extent that housing affordability improves while interest rates are rising this year.”

Financial markets put the chance of the Reserve Bank taking the official cash rate to 1.5 per cent at its July 5 meeting at 82 per cent. That would be a rate rise of 0.65 percentage points.

Such an increase would add almost $300 to the monthly repayments on an $800,000 mortgage. That would be on top of the $650 a month in extra repayments from the increase in interest rates since May 4.

Last week, the Fair Work Commission increased the minimum wage for the 2022-23 financial year by 5.2 per cent. The RBA and private sector economists expect wages growth to pick-up due to the tight labour market.

But Moody’s said even sizeable increases in wages won’t be enough to keep up with the impact of higher interest rates on mortgage repayments. 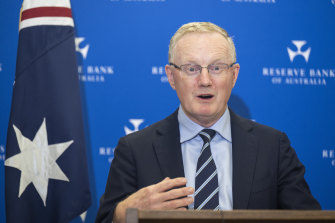 RBA governor Philip Lowe is expected to give more guidance on the bank’s interest rate strategy on Tuesday.Credit:Louie Douvis

Moodys’ modelling of the property market found the sheer size of new mortgages meant that to keep affordability at its current level would require a 22 per cent drop in prices with the official cash rate at 2.85 per cent. The agency is not forecasting such a large fall in prices.

If prices fall 10 per cent, as some banks are forecasting, affordability will continue to decline.

He is expected to expand on comments he made in a rare television interview last week in which he said the bank would do whatever was required to bring inflation back to within the RBA’s 2-3 per cent target band.

Senior economist Ben Jarman said Dr Lowe’s interview last week suggested the bank was keen to get the official cash rate back to 2.5 per cent more quickly than had been expected.

“Our call has similarly argued for the cash rate to approach 2.5 per cent but, given Dr Lowe’s increased confidence, the path to the destination should be faster,” he said.