Kanye West gifted Kim Kardashian a hologram of her late father offering a personalized message for her 40th birthday — with many asking why he didn’t just book David Schwimmer, instead.

As if Kim Kardashian’s 40th birthday celebration couldn’t get more ostentatious in the eyes of many in this pandemic-stricken nation, Kanye West upped the ante on every husband out there by gifting her a custom hologram of her late father, Robert Kardashian.

The reality star was already facing backlash for seemingly flaunting her wealth and privilege by renting out a “secret” private island getaway for a couple dozen of her closest family and friends while many Americans are struggling to make ends meet and quarantining at home for the eighth month now.

Now, just to prove that they’re living in a world the likes of which most of us can’t even imagine, Kanye presented Kim with a message from beyond, delivered by her father. But all the while, fans kept seeing another face in the slightly digitized virtual surreality … and maybe that’s just a sign of good casting.

Robert’s hologram grooved to one of the favorite tracks from when he used to drive his daughters to school, praised Kim as a mother, a proud Armenian and for carrying on his legacy in her pursuit of becoming a lawyer.

Kim shared the video to her social media on Thursday night, calling it “the most thoughtful gift of a lifetime.” It’s also one of the most technically proficient and impressive bits of A.I. work, with TMZ reporting that Kanye spent quite a bit of time working with audio and video of Robert in the studio to bring this vision to life.

But as impressive as it was as a technical achievement, Twitter couldn’t help but crack up at one of the lines Robert delivered to his daughter, perhaps betraying every so slightly who actually scripted his very personalized message.

Many fans couldn’t get enough of Kanye working a shoutout to his own genius into Robert’s message, either. Beyond that, they also thought the hologram looked an awful lot like one of America’s favorite “Friends” — those who weren’t weirded out altogether by it, that is.

In their defense, David Schwimmer did famously portray Robert Kardashian in the acclaimed “The People vs. O.J. Simpson” mini-series back in 2016. Apparently, the likeness is strong the other way around, too, with some Twitter users suggesting it might have just been cheaper to book Schwimmer for an appearance than build this hologram. 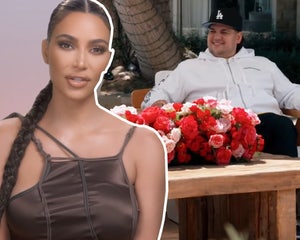 Got a story or tip for us? Email TooFab editors at [email protected].