Recently, a controversy erupted online over an image from the upcoming Netflix adaptation of Matilda. It showed Emma Thompson (who I love) in character as the iconic Miss Trunchbull (who I also love). The controversy happened because Emma Thompson was pictured wearing a fat suit. 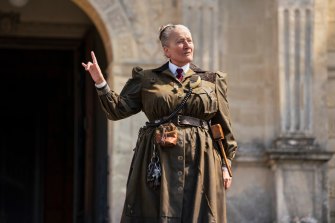 There are a couple of reasons why this grated. One is that fat suits are literally dehumanising. They strip away the idea of us as individuals, and we become a costume. Fat suits are never worn to praise or appreciate us, or portray us in kind and loving ways. We are clowns, we are comedy, we are gross and lazy and sad and unfulfilled. It’s hard enough to live in this body without the added insult of thin people trying it on for a bit, usually to our detriment.

Seeing us being mocked on screen reinforces our daily experiences and how we’re treated in the world. Just last week, I was accosted by a man who had come up behind me as I was about to enter my apartment building. He was well dressed and friendly looking, and I assumed I’d dropped something. He got me to lean in and look at his phone, and on it was written in big bold letters:

Hi, I’m Joe and I’m an admirer of big girls.

A flash of heat, my stomach dropped. I didn’t read the rest, I just panicked. He started asking me things like if I “had someone” and taking steps toward me, crowding me as I got the door open. I heard him shout from behind, ‘Hey! I was only trying to be respectful!’” Well, Joe, I certainly didn’t feel respected, having been followed to my front door by a strange man at 8:30am and made to feel fetishised, uncomfortable and scared, remaining shaky for the entire day, but I guess we’ll have to agree to disagree.

This is just one in a long list of incidents with strangers that have occurred because I have dared to be a fat woman walking around in my body. There’s the roughly 50-odd times someone has called something fatphobic out of a car window at me.

The time a man, unprompted, called me a “fat bitch” and flicked his cigarette at me as I walked down the street in front of him. The woman last year who angrily snarled, “No wonder you’re fat, eating shit like that” as she walked past me in a mall, merely waiting for someone in the vicinity of a McDonald’s.

The world’s reaction to my fatness has overwhelmingly been anger, hatred, disgust and dismissal. The incident the other morning may have been different in tone, but the thing that it has in common with the rest is that to all of these people, I am not a real person. I am just a body. Dehumanised on the streets, dehumanised in the sheets.

I think seeing Emma Thompson in that fat suit is a reminder for a lot of people that for all the talk and our efforts, we haven’t really come that far. For as long as I can remember, every time a fat person has appeared onscreen in a film or movie, I tense up – knowing I’m probably about to feel humiliated, not represented.

It’s not just fat suits, of course. It’s … almost everything. Have you noticed how many fat characters in movies are pictured messily eating the entire time they are onscreen? It’s like the director thinks the audience will be confused about how the actor got fat, so they have to be holding a hot dog. Fat people have historically been shown to be someone you are encouraged to laugh at, or be grossed out by. Think Monica from Friends in her fat suit, Gwyneth Paltrow in Shallow Hal, and some truly deranged scenes in high school movies.

There is a theory that the current nostalgia for the 2000s is driving us back to the toxic diet culture and damaging aesthetic that came with Y2K fashion. The Kardashians are ditching their curvier figures, and thin models such as Julia Fox are influencing fashion trends back to the midriff-heavy days of old.

If you want to remember what this was like, revisit any teen movie from the late ’90s and early 00s. Even the great ones: Bring It On, Clueless, Mean Girls. All of them are filled with thin teenage girls calling each other fat, losing weight, talking about losing weight.

It’s possible we are seeing a backlash to that small amount of progress we have clawed and fought for in past years with body positivity and representation. I really hope not. A memory that forces its way into my brain every time I am reminded, like I was this week, how the world feels about my body, is me lying on the floor at a party around 2001. I’m listening to a very drunk, slightly chubby friend of mine crying, telling me that she wished she would get cancer so that she could lose some weight. You may not care about the feelings of fat people, but the spillover of fatphobia is that it causes everyone to hate their bodies.

This isn’t Emma Thompson’s fault, or Schmidt from New Girl’s fault, or Sarah Paulson’s fault. It’s not the fat suits, it’s the fatphobic system. Let’s say the studio making Matilda demanded they cast a “big name” (no pun intended) to play Trunchbull, which is how it works in film and TV. Who do you think they should have called up? Can you name five fat actors currently starring in movies? 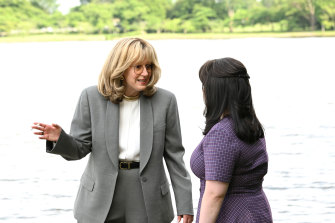 If you’ve thought of a list including Melissa McCarthy, Rebel Wilson, Seth Rogan or Jonah Hill, cross them off – they have all lost weight in recent years. How many big-name recognisable fat actors are left? Is it less than two in the entire world? Doesn’t that blow your mind?

When fat people are made to feel small (so to speak), are discouraged from the spotlight, when they are discriminated against, when there are no stories made about them, no starring roles, when they are encouraged to not be fat – this is what we get. We get a vacuum. We get the fat suits.

We haven’t progressed much, but there are still bright spots. Shrill, Somebody Somewhere and Booksmart all have great fat leads. We have Lizzo, we have Nicole Byer.

But it still seems like every single bit of progress is countered by an endless stream of fatphobia – such as from Melanie Lynskey, who spoke about the body-shaming she experienced on the set of Yellowjackets. Treating us like we don’t exist unless you are dehumanising us or mocking us isn’t going to stop people from being fat or getting fat. If you hate me for it, I don’t care, but I want you to think about all the different-sized people around you, already maybe struggling with how they feel about their bodies.

It would be better for literally everyone (except maybe all the industries from Hollywood to makeup and fashion that profit from us hating ourselves) if fat people were treated as if they are human beings with a complex internal life. It’s time to normalise fat people. Normalise seeing a fat woman play a fat woman, without the need for prosthetics. Normalise characters being fat just because.

Rebecca Shaw is a comedy writer. She tweets @brocklesnitch.