Found at last! William Elliot – The orphan choirboy who only wanted to be loved 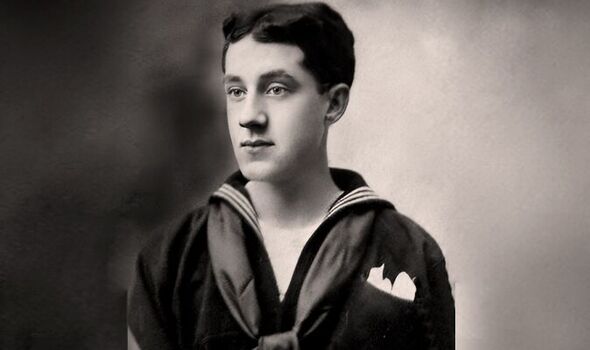 THE Victorian choirboy whose poignant plea to be remembered touched the hearts of the nation has finally been identified… as a naval hero who forged a new life in America and found the love he craved.When William Elliott wrote his touching note in 1897, he was a lonely 13-year-old living in a Sunderland orphanage. Just weeks away from being sent out alone into the harsh world, he left a heartfelt message to anyone who might read it.

“I love you if you love me,” he scrawled in pencil on the back of a chorister’s order of service, asking whoever found the note to “keep it in remembrance of me,W. Elliott.”

Then he pushed his touching message down the back of a pew in Sunderland Parish Church, where it lay hidden for 125 years until recently discovered during renovations.

William’s note made headlines across the UK, but the choirboy’s life has remained a mystery – until now. The Daily Express, aided by ancestral researchers Findmypast, has traced the life of the fatherless boy whose message searched for love and connection at a time when his future must have seemed daunting.

The lad from County Durham could hardly have imagined that he would soon move to America, wear the golden epaulettes, ceremonial sword and smart dress uniform of a US naval officer, and proudly serve in the US Navy for 42 years, becoming a Commander in the Second World War. That sad 13-year-old orphanage boy had no idea that he would go on to find love, and found a dynasty that today numbers dozens of his great-great-grandchildren.

William Elliott’s great-granddaughter Dawn Barrett wept when the Daily Express revealed to her his message from beyond the grave.

“It’s very emotional, to hear my greatgrandfather speaking from over a century ago,” said Dawn, 53, of Yelm, Washington. “It brought me to tears. I had chills reading his words for the first time.

“He was a scared boy of 13, about to set out alone into the world, and wanting to be heard. I’m so glad that he found love and had a family that lives on to this day. I think he’d be happy to know that.”

Her sister, Erin Barrett, 60, of Arcadia, California, said: “I’m so happy that the note he left in church has been found. I’m shocked, ecstatic, overwhelmed.

“My grandmother Edith – William’s daughter – used to tell us how she would dress up in furs as a young woman to accompany her father to the Officer’s Ball. She was probably just a teenager.

“She mentioned an orphanage, but I didn’t realise that it was her father who had lived there.”

Their brother, Eric Barrett, 61, of Los Angeles, California, said: “We’ve been trying for years to find out more about our great-grandfather, but the trail always went cold.

William was born in Sunderland on October 29, n , 1883, the son of Thomas Duncan Elliott and his wife Sarah Ann (nee Barker). Thomas was a Chief Officer in the Mercantile Marine, the forerunner of the Merchant Navy, and his family was prospering, with four young children.

But on December 9, 1887, disaster struck while Thomas was sailing on the Skyros merchant vessel, carrying a cargo of wood from Sundsvall in Sweden to Dordt in Germany. Battered by a violent storm and overloaded with more lumber than she could safely carry, the ship dipped sharply into a wave and Thomas was washed overboard along with crewmateWilliamWynn.

Thomas clung desperately to a rope, but his energy failed and his hands slipped away. Both men drowned.

For five years William’s mother struggled to feed him and her two other surviving children – one had died in infancy – but when he turned eight she reluctantly placed him in the Sunderland Orphanage Asylum, which cared for the sons of dead or injured mariners, where he would stay for the next six years.

Though it was the Victorian era, the orphanage was hardly Dickensian: it gave children a decent education, occasional outings for fun, and – since it was well-funded by sailors at the port city – taught its wards seafaring skills. But orphanage rules determined that when William turned 14 he would have to leave and make his own way in the world. Counting down the days before his imminent departure, choirboyWilliam sat in a pew at the Sunderland Parish Church and scrawled his moving note.

“Dear friend,” he wrote, “whoever finds this paper think of William Elliott, who had two months, two weeks and four days on 11 of August 1897. Whoever you are that finds this paper, don’t tear it up or throw it away, keep it in remembrance of me, W. Elliott. I was the leading boy of this choir. I love you if you love me.”

Thanks to research by Findmypast, the Daily Express has traced William’s journey since writing that touching note. He left the orphanage in October 1897 – records indicate that his conduct throughout his years there had been “very good” – and by 1901 was working as a clerk for a local solicitor. He even moved back in with his mother, Sarah.

But then William’s life took a turn he could have hardly imagined while scribbling his appeal to the future in the church pew.

His sister Edith, four years his senior, had married California-born Alexander Stuart and travelled to America in 1900 to start a new life. William was 19 years old when his sister invited him to join her in the US. He left Glasgow on the steamship Columbia on March 3, 1903, giving his occupation as ‘clerk’. He arrived in New York 20 days later with just $25 to his name.

William lived at 20 Evarts Street, Newport, Rhode Island – a sailing mecca. All his seafaring training at the orphanage paid off: seven months after arriving in America he enlisted in the US Navy, on October 26, 1903, just three days short of his 20th birthday. Five years later he married American Dora MacIntire, on August 3, 1908, having two children:William Jr. and Edith.

Records show he was stationed at Boston, Massachusetts, where he rose to the rank of

Chief Yeoman before being honourably discharged in February 1916, the year he became a US citizen.

But when the First World War broke out,William wanted to play his part, and in 1918 he re-enlisted in the US Navy. Fate conspired to keep him safe, and he was assigned to work with the pay corps. By 1920 he had been promoted to the rank of Lieutenant.

US files also recorded William’s sister, Edith, aged 43 in 1923, accompanied by her daughter Louise, aged 21, sailing aboard the Cunard steamship Scythia from Florida to England to visit her mother in Sunderland.

William travelled the world with Dora, but their happiness was cut short when she died in 1936, aged 52. She was buried at Arlington National Cemetery in Washington, D.C., in a grave that he would eventually share.

His obituary in the San Diego Union reveals that he served on supply ships, submarine tenders, destroyer tenders, the repair ship Vestal, at the Cristobal submarine base in Panama, and at the Boston Navy Yard, before commanding the supply department at the Naval Training Centre in San Diego, California, where he made his home after retiring from the Navy in 1939.

But when America joined the Second World War in 1941, William re-enlisted, working as a supply officer, reaching the rank of Commander before retiring again after the war.

He had an active social life in retirement, belonging to officers’ clubs, military associations, a Masonic Lodge and a men’s club.

He married again to Boston-born Mabel Frances, who died in 1962, and according to his obituary was in his eighties when he finally wed a third time to Florence, who survived him when William died at a San Diego rest home in April, 1968, aged 84.

Findmypast research specialist Jen Baldwin said: “We were all touched by William Elliott’s note and were determined to discover what happened to him. This has been a very difficult do one to settle – if only he had a less common name.

if he thought of I hope now that in fact, “We successfully traced his journey from the UK to the US as well as confirming his sister’s movements across the pond. He and his first wife are buried in Arlington National Cemetery, a solemn and reverent location.”

William Elliott’s wish in his childhood note has been fulfilled: he has not been forgotten.

“I do wonder if he ever thought of that note back in Sunderland, stuffed into a pew, but I hope he knows now that he is, in fact, remembered,” said Baldwin.

That note, treated by conservationists to remove a century of dust, grime and furniture polish, has been framed and now hangs in the church, since renamed the Holy Trinity Church, a Grade I listed building in Sunderland’s East End.

And his descendants, who grew up unaware of William’s travels and travails, have been newly reunited with his memory.

“I’m crying tears of joy,” said William’s great-granddaughter Donna Landers, 50, of Westland, Oregon. “Finding his note is so emotional. My entire family exists only because of him.”

Added Erin: “I’m astonished by the research you’ve done, bringing our great-grandfather back to us. It’s amazing the journey that he took, the struggles that he had to go through, the heartbreak as a child losing his father and being torn from his mother, going to the United States with next to nothing and making a life for himself.What a great man!

“I know he gave his children a great life, and was loved. What more can anyone ask of life?”