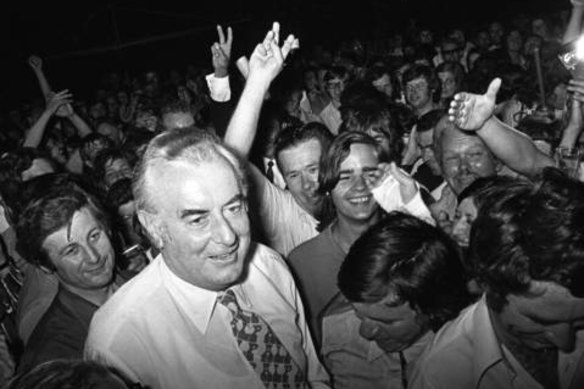 Gough and Margaret Whitlam mobbed by a crowd of supporters after the Labor Party won the 1972 Federal election.Credit:George Lipman

By contrast, the Prime Minister (Mr McMahon) last night attended one of the most orderly meetings of the campaign.

Police at Campbelltown, in Mr Whitlam’s electorate near Sydney, received a telephone call in the nearby Civic Centre, where Mr Whitlam was about to speak.

State and Commonwealth police on duty at the hall decided the hall had to be cleared immediately.

Police gave the all-clear in 15 minutes and Mr Whitlam and the audience quietly returned to continue the meeting. 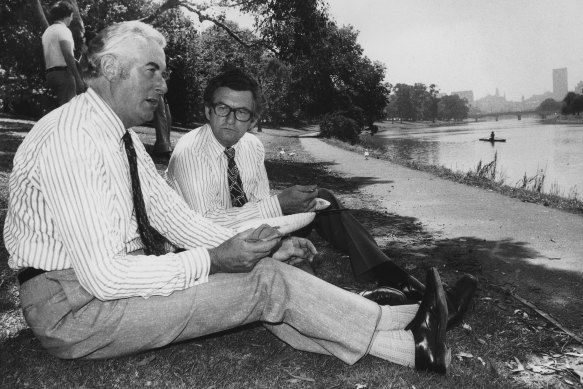 Gough Whitlam and Bob Hawke relax on the banks of the Yarra River after a rally in City Square in 1972.Credit:The Age Archives

The NSW secretary of the A.L.P. (Mr Westerway) interrupted Mr. Hawke and told him a caller had said a bomb was in the building.

The big crowd was evacuated. Police who searched the hall for half-an-hour were satisfied there was no bomb and the meeting continued.

In HOBART, the town hall was packed by about 600 people to hear Mr McMahon speak. Many of them were opposed to him.

They frequently heckled, interjected, jeered and booed, but there was no attempt to disrupt the meeting.

Some student leaders at the meeting said they believed the demonstrators had toned down their behaviour in response to appeals by Mr Whitlam to give Mr McMahon “a fair go”.

Mr McMahon said in his speech that a significant feature of the campaign had been the well organised attempts by Labor Party supporters to disrupt Liberal Party meetings.

“Hundreds of people, many wearing Labor Party badges, holding Labor Party placards and chanting Labor Party slogans, and all working to a co-ordinated plan, have sought to drown us out and obstruct our movements,” Mr. McMahon said.

“Both Mr. Hawke and Mr. Whitlam have attempted to call them off without success.”

The Labor leaders desperately want to sweep violence under the carpet until after the elections.” and searched.

ADELAIDE – A smoke bomb was thrown at the Prime Minister (Mr McMahon) as he left an election rally in the Adelaide Town Hall last night.

It forced Mr and Mrs McMahon and Liberal Party officials to retreat back into the hall.

Mr McMahon waited in the foyer for about five minutes while police experts removed the bomb. Uniformed police then cleared an exit through a crowd of several hundred chanting demonstrators.

The Prime Minister had faced the noisiest election meeting seen in Adelaide in more than 15 years. More than 1200 people packed the town hail. Several hundred more could not get in.

At least half the audience was hostile towards Mr McMahon. They chanted: “It’s time.”