"I'm going to imagine him out there, still on the road, doing what he loves with all his heart and humor."

John Stamos is continuing to mourn the devastating and sudden death of his “Full House” co-star and friend, Bob Saget.

On Monday, the 58-year-old actor took to Instagram to share a heartbreaking tribute, in which he admitted that he’s “just not ready to say goodbye” to Saget, who died on Sunday at the age of 65. 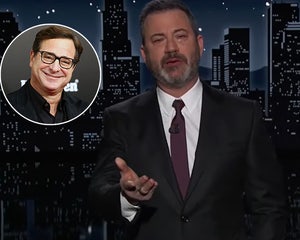 Jimmy Kimmel Chokes Up, Breaks Down During Powerful Tribute to 'Sweetest' Bob Saget

“I’m not ready to accept that he’s gone — I’m not going to say goodbye yet,” Stamos captioned a photo of himself and Saget.

Stamos — who also worked with Saget on the “Full House” revival, “Fuller House” — continued his post by saying he’s “going to imagine” that Saget is still performing standup comedy and making people laugh.

“I’m going to imagine him out there, still on the road, doing what he loves with all his heart and humor,” Stamos wrote. “He’s standing on stage, killing! Another two-hour set in front of a couple hundred of the luckiest people on the planet. They’re laughing so hard, they weep.”

“On his way to the hotel, he calls his beautiful, loving wife, Kelly,” he continued, referencing Saget’s wife, Kelly Rizzo. “He says he feels 26 again, alive! Then asks her to fix up a picture he wants to post. She tells him it doesn’t need fixing, and tells him how handsome he is. He tells her he loves her with every bit of his heart. And when he gets to the hotel to put his head on the pillow, he misses his daughters, his family, his friends. God, he loves us all so much. And he goes to sleep dreaming of when we’ll all meet again — and he’s smiling. I know in my heart he’s smiling, still hearing the laughter from a few hours before.”

Saget was found by hotel security around 4 p.m. ET at the Ritz-Carlton hotel in Orlando, Florida on Sunday, per TMZ, following a standup performance in Jacksonville.

In the wake of the news of Saget’s death, Stamos shared his reaction on Twitter, writing, “I am broken. I am gutted.  I am in complete and utter shock.  I will never ever have another friend like him. I love you so much Bobby.”

In addition to Stamos, many other “Full House” cast members shared tributes on social media.

Lori Loughlin released a statement reading, “Words cannot begin to express how devastated I am. Bob was more than my friend; he was my family. I will miss his kind heart and quick wit. Thank you for a lifetime of wonderful memories and laughter. I love you, Bobby.”

Mary-Kate and Ashley Olsen also issued a joint statement saying, “Bob was the most loving, compassionate and generous man. We are deeply saddened that he is no longer with us but know that he will continue to be by our side to guide us as gracefully as he always has. We are thinking of his daughters, wife and family and are sending our condolences.”

Andrea Barber shared a lengthy tribute, writing, “This one hurts. 💔 He had the biggest heart of anyone in Hollywood. He gave the biggest hugs. I am gutted that I will never be able to hug him again. Bob ended every text, every interaction with ‘Love you.’ Didn’t matter how long or short we’d been apart. He loved so deeply and so fiercely,” she wrote. “And he never hesitated to tell you just how much you meant to him. This is the greatest lesson I learned from Bob Saget – don’t hesitate to tell people you love them. I feel at peace knowing that Bob knew exactly how much I adore him.”

“Rest well, my dear friend,” she concluded. “I have no doubt you are making everyone in Heaven laugh until their cheeks hurt, just as you did here on Earth.”

Jodie Sweetin also posted a lengthy tribute as well, in which she called Saget the “best TV dad ever.” Check out what she said, here.

“Fuller House” star Juan Pablo Di Pace shared, “An amazingly kind and generous man left us today. Will miss you a lot Bob. So so much…”

Meanwhile, the core cast — including Sweetin, Bure, the Olsen twins, Stamos, Loughlin, Coulier, Barber, Scott Weinger and creator Jeff Franklin — released a joint statement on Monday reading, “Thirty-five years ago, we came together as a TV family, but we became a real family. And now we grieve as a family. Bob made us laugh until we cried. Now our tears flow in sadness, but also with gratitude for all the beautiful memories of our sweet, kind, hilarious, cherished Bob. He was a brother to us guys, a father to us girls and a friend to all of us. Bob, we love you dearly.”

“We ask in Bob’s honor, hug the people you love. No one gave better hugs than Bob,” the statement concluded.

Saget’s cause of death won’t be determined for weeks, however, law enforcement sources told TMZ that they see signs pointing to a heart attack or stroke.