At the recent ESSENCE Festival of Culture, SheaMoisture took to the stage with their partner, the New Voices Foundation, to empower Black entrepreneurs and reveal three Black-owned businesses whose lives changed in an instant.

SheaMoisture Next Black Millionaire Fund
Launched in 2021, the fund is part of SheaMoisture’s longstanding commitment to reinvesting in the Black community and aims to close the $11 trillion-dollar racial wealth gap. “For the last two years, SheaMoisture has doubled down on its commitment to our consumer and community, and we’re thrilled to celebrate our collective culture, legacy, and future,” said SheaMoisture CEO Cara Sabin. 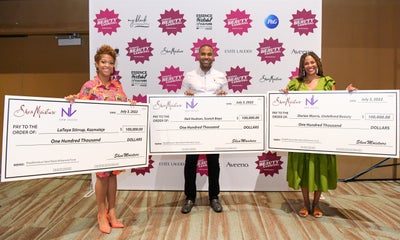 Meet the Winners
Each business receives $100,000 in innovation seed funding, access to executives who will share their recipes for success, plus mentorship and coaching from the New Voices Foundation. The three winners are: Neil Hudson from Atlanta based sauce brand Scotch Boyz, Latoya Stirrup from Miami haircare brand Kazmaleje, and Dorian Morris from Los Angeles based beauty brand Undefined Beauty.

Click here to learn more about the SheaMoisture Next Black Millionaire Fund now.