Amazing Space viewers have branded George Clarke and designer Will Hardie’s 360-degree rotating home which fits four rooms in one ‘off the scale genius.’

In last night’s episode, George took a look back at arguably his most ambitious project, when he and Sussex-based designer Will Hardie built a gravity-defying, rotating home inspired by vintage sci-fi comics.

Speaking of the back of the house which contains the launch panel, presenter George explained: ‘Our clever mechanism, powered by wheelchair motors, will turn the four walls 90 degrees in just 10 seconds.

Will added: ‘It’s incredible isn’t it? It’s the same four walls and yet we’re standing in a completely different space.’

And viewers were left blown away by the concept, which completely transformed the way they think about habitable space.

‘One giant leap for #amazingspaces futuristic home #outofthisworld,’ wrote one, while a second agreed: ‘Off the scale genius.’ 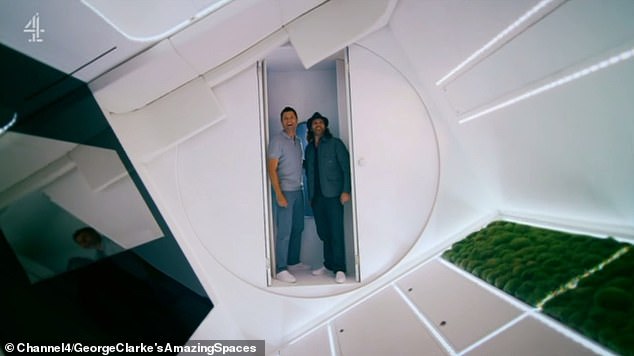 In last night’s episode of Channel 4’s Amazing Spaces, George took a look back at arguably his most ambitious project, when he and Sussex-based designer Will Hardie built a 360-degree, gravity-defying, rotating home inspired by vintage sci-fi comics (pictured) 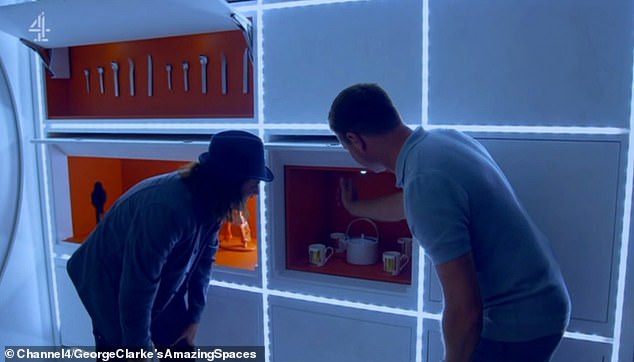 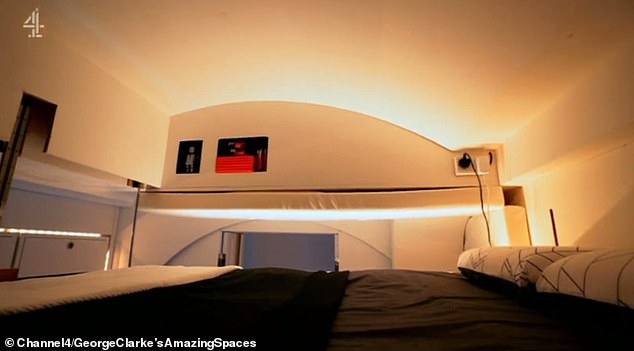 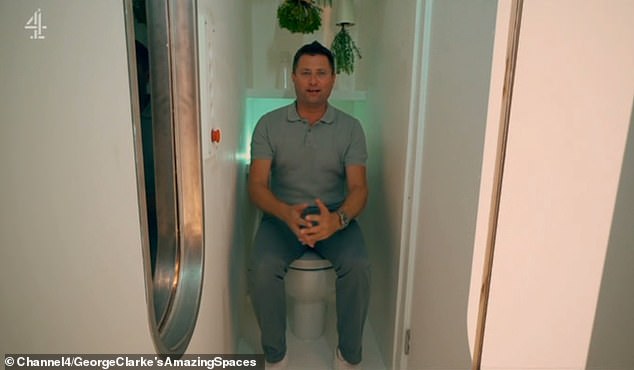 The bathroom (pictured) and a control room are on either side of the rotating room and are static,

In search of inspiration for his seemingly impossible challenge, George headed to Holland, Germany and the local fairground.

Filled with new ideas, the architect explained how his house design will feature a living room with seating area, a kitchen fitted with futuristic appliances, a spacious bedroom and a bathroom.

‘But this is where my design makes a quantum leap as every floor is also a wall,’ he said. ‘The entire house will then rotate on command with each room to come into play when needed or be cleverly packed away again before rotating onto the next.

‘This effective use of space allows us to fit an impress 42 square metre of floor space into a tiny 3 metre cube.’

And those who tuned in were left gobsmacked when George and Will took them on a look around the prototype futuristic home, made from timber and aluminium, which rotated them to their room of choice with a flick of a switch – no walking needed.

The pair told how the bathroom and a control room which featured on either side of the rotating room are static. And instead of using traditional materials, they added that the hallway floor is made of fuzzy moss. 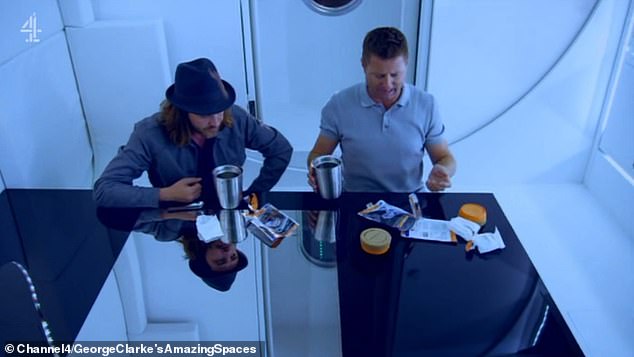 The clever duo then demonstrated how the mirror in the hallway turns into a kitchen table, before transforming into a TV in the bedroom. Pictured, as a dining table 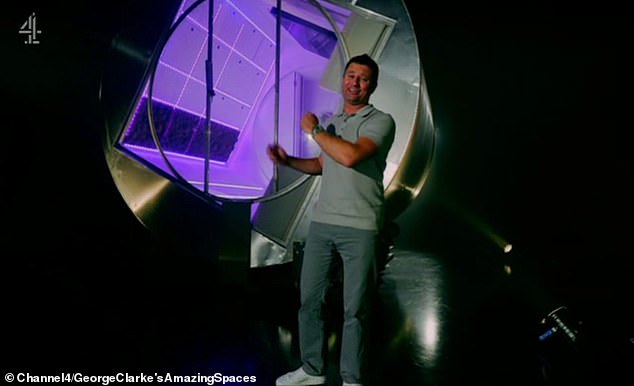 George Clarke explained that the effective use of space allows us to fit an impressive 42 metre-squared of floor space into a tiny three metre cube. Pictured, the exterior 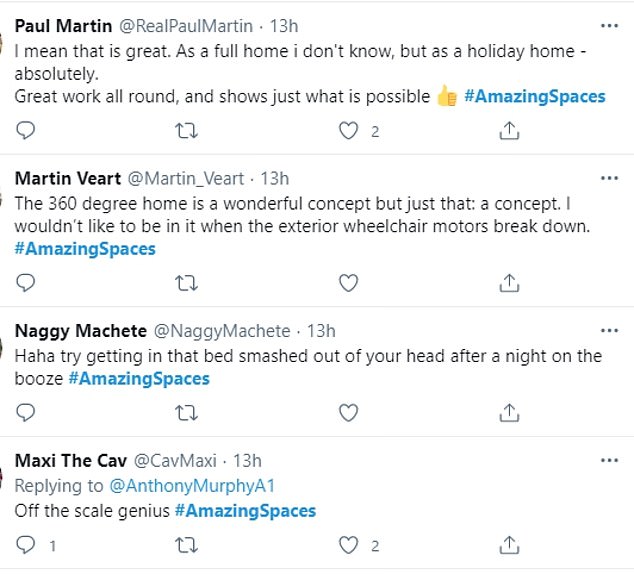 Social media users were blown away by the design, with one branding it ‘off the scale genius’ (pictured) 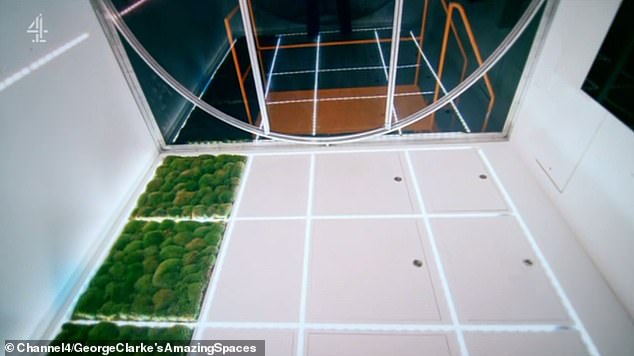 George explained how having that little bit of green in the white space makes it feel as if it’s connected to nature. Pictured, the garden made fromfuzzy

‘To have that little bit of green in this white space just makes it feel as if it’s connected to nature,’ George explained.

With a quick click of a switch, the pair were then seen being transported to the kitchen, which was beautifully integrated into a wall.

‘The most obvious challenge we faced with the kitchen is how to stop its contents from crashing around during rotation,’ said George. ‘The knives and forks are beautifully magnetised against the wall.’

But Will had the perfect answer, with his design of gimbals.

‘Sat on a counter-weight, the gimbals allow the products – including a microwave – to remain upright while the cylinder rotates,’ explained George.

The clever duo then demonstrated how the mirror in the hallway turns into a kitchen table, before transforming into a TV in the bedroom.

‘Our multi-functional wall mirror is now the dining table which sits on motorised legs which we can adjust using a remote control,’ explained George.

And with the kitchen table packed away, George joked he was ready for a lie down – and with a simple touch of a button, they were seen being effortlessly transported to the next room in their prototype home – the bedroom.

‘This is your bedroom here, but rather than use all this space, have loads of room…and put it up there,’ explained Will, pointing to the ceiling.

George added: ‘Now our ingenius mirror-come table has been rotated 180 degrees, its underside can be used as a suspended bed.’ 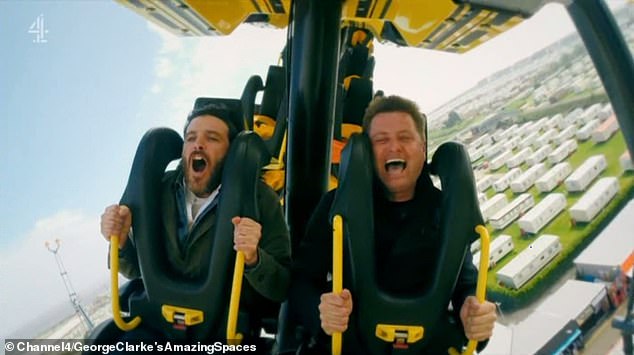 In search of inspiration for this seemingly impossible challenge, George headed to Holland, Germany and the local fairground. Pictured, with Will Hardie 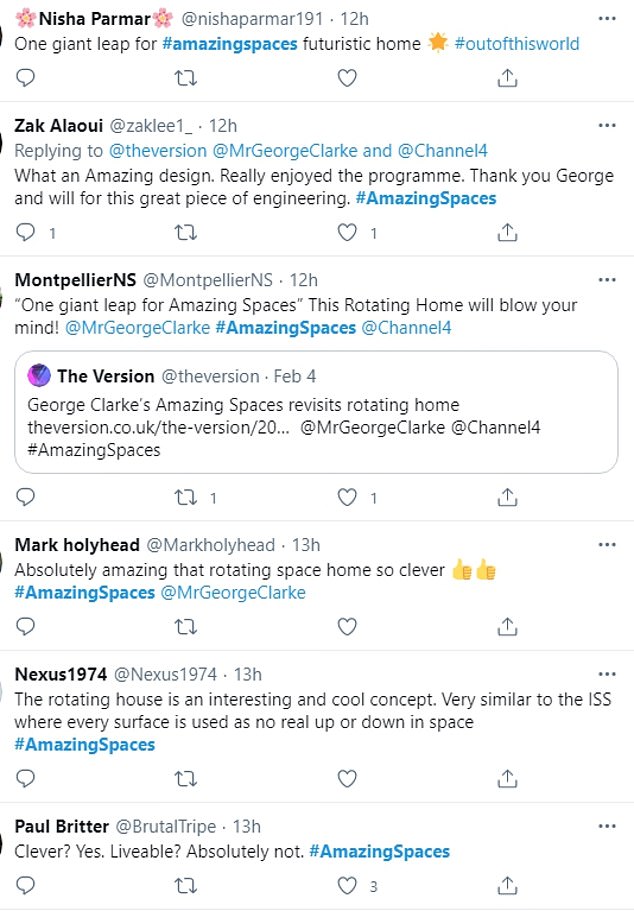 And rather than hanging up your keys when you get home, the pair explained how you just attach them to a magnet on the wall, while the cupboards take coats and shoes which are all held in place using bungees.

They also demonstrated how LED lighting changes with each turn to change the mood of the room – so in the bedroom lights dim while in the dining room they’re much brighter.

‘What an Amazing design. Really enjoyed the programme. Thank you George and will for this great piece of engineering,’ wrote one viewer, while a second commented: “One giant leap for Amazing Spaces” This Rotating Home will blow your mind!’

But while many were undeniably impressed with the design, others questioned its practicality as a living space – with one branding it ‘mostly bonkers.’

‘What if there’s a power cut mid spin??’ joked one, while a second wrote: ‘Clever? Yes. Liveable? Absolutely not.’

A third added: ‘I mean that is great. As a full home I don’t know, but as a holiday home – absolutely. Great work all round, and shows just what is possible,’ while a fourth wrote: ‘The 360 degree home is a wonderful concept but just that: a concept. I wouldn’t like to be in it when the exterior wheelchair motors break down.’

A further joked: ‘Haha try getting in that bed smashed out of your head after a night on the booze.’