Gordi: ‘Relationships and love are about the person, not the gender’

Gordi discusses her upbringing, career and the men who have influenced her.

Occupation: Musician
Age: 28
Relationship status: In a relationship
Best known for: The album Our Two Skins 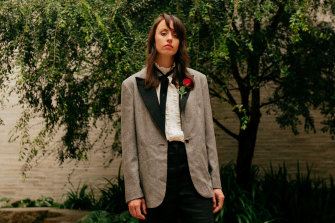 Gordi: “[Michael Gudinski] was a supporter of women who made feel you could conquer whatever you wanted.”Credit:Jess Gleeson

My maternal grandfather, Noel Martin, was the dean of dentistry at Sydney University and passionate about public health. He worked with the World Health Organisation and was one of the key people involved with getting fluoride into the water in Australia. He developed Alzheimer’s and dementia when I was 13 and died when I was 14.

My earliest memories of my dad, Michael, are travelling around our family farm in Canowindra, NSW. I’m the youngest of four siblings and he’d come in from work to scoop one of us up to drive on his lap in his ute. We’d help him round up the sheep and watch him do whatever jobs he had to finish. He taught us how to fix an irrigation pipe and how to mark a lamb.

Dad went to university to study landscape architecture but ended up back on the farm, which had been in his family for more than 100 years. His father died when he was 16. He runs the property with my mum, Helen.

My brother Tom is nine years older than me and my other brother, Joe, is four years older. I also have a sister, Anna, who is seven years older. We all went to boarding school in Sydney as soon as we got to high school.

I was only three when Tom left to go to boarding school. I’d be bundled up in the car to go to Sydney to watch his Saturday sport games or Friday night debates. He was always more of a dad than a brother to me. The first time I went to a pub, he gave me $50 and told me to have a good time.

Joe and I had a more classic sister-brother relationship. We would fight about everything. We had rosters in the house stating who was in charge of the remote on certain days and who got to sit in the front seat of the family car. We had a lot of the same interests, too. We played the same sports, and anything he did, I wanted to do. He learnt to play the guitar at 10 and it inspired me to do the same.

I tended to play footy with the boys at school. I was often the only girl on their sporting team. We would build cubby houses together, hang by the creek and ride horses. Any boy who was talented at sport was worth my attention, but more from a point of view of rivalry than for their affection.

“Dad had been proud of me when I got into uni to study medicine, so in New York I asked him whether I should quit music to become a doctor. He said to do whatever it took to do both.”

My first celebrity crush was with Heath Ledger in the film 10 Things I Hate About You. He had a big cheesy smile. It was such a fresh thing to see on the big screen. There was something beautiful about it.

My parents came with me to New York in 2015. I was signing a record deal, a big turning point for my music career. Dad had been proud of me when I got into uni to study medicine, so in New York I asked him whether I should quit music to become a doctor. He said to do whatever it took to do both. That became a slogan for the remainder of my medical studies.

I’ve been with my partner for four years. I don’t believe in categories or labels. For me, relationships and love are about the person, not the gender. I hadn’t found the right person, and then I did. It was a challenging time, as I had only ever dated men and never got out of a relationship what I thought I should have.

My brother-in-law, Adrian, is also my manager. He started dating my sister in 2011 and soon after we started playing music together. I couldn’t do what I do without him.

Michael Gudinski became a friend and role model after I signed with Mushroom and Liberation in 2015. In the six months before Michael died [in March], we became quite close. In an industry where there are men in senior positions who don’t use their power or privilege in the right way, Michael did. He was a supporter of women who made feel you could conquer whatever you wanted.

Gordi’s album Our Two Skins is out now.