Modelling shows the future of fossil fuel exports that drive regional economies is grim, complicating the Prime Minister’s message to the Nationals that regional Australia will be shielded from losses under his push to commit to net zero emissions by 2050.

The Reserve Bank of Australia’s recent analysis of coal and gas exports shows the industries would at leave halve if major customers China, Japan and South Korea met their climate commitments.

The Nationals are balking at endorsing the 2050 target, which Prime Minister Scott Morrison is aiming to commit to on the international stage at the United Nations climate summit in Glasgow in two weeks’ time. 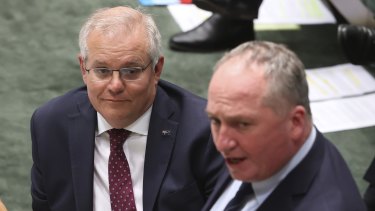 Nationals MPs and Senators are concerned that committing to cut emissions will kill off resources industries that are based in their electorates and have asked the federal government for more detail on their projections.

Energy and Emissions Reduction Minister Angus Taylor has forecast a regional jobs boom in lower emissions industries hydrogen, minerals processing as well as green steel and aluminium, and Mr Morrison has said regional Australia will not “carry the burden for the country” on climate policy. The details of the Coalition’s net zero plan have not been released.

Mr Taylor also said this week demand from Indo-Pacific countries meant “gas production and exports are projected to grow in the decades ahead”.

When asked on 2GB radio last week what he would say to Australia’s 50,000 coal and 25,000 oil and gas workers Mr Taylor said: “I think those industries have a great future”.

Resources Minister Keith Pitt, one of several Nationals MPs who are firmly opposed to a net zero target, said forecasts prepared by his department expect coal exports to grow until 2030. LNG exports would also increase and demand for critical minerals, which include copper and nickel needed for solar and wind farm infrastructure, would expand.

“We’ll continue to do what’s in Australia’s national interest, and particularly one which drives jobs and economies in regional areas,” Mr Pitt told ABC radio on Tuesday. “It’s important that we continue to look after those traditional industries and grow new ones.”

China, South Korea and Japan account for about two-thirds of Australia’s LNG and thermal coal exports. Each has committed to net zero by mid-century.

The RBA modelled what those commitments on the environment would mean for Australia’s exports of the two fossil fuels.

It found the $49 billion LNG export industry would be halved by 2030 while exports of thermal coal, currently valued at $21 billion, would collapse by 80 per cent. Under its current target, Australia would cut emissions at least 26 per cent from 2005 levels by 2030, with no deadline on net zero.

The RBA’s modelling assumes Australia’s export customers will live up to their public pledges to cut greenhouse emissions, which like the Prime Minister’s policy are expected to be formalised at the UN’s 26th session of the Conference of the Parties (COP26) in Glasgow starting November 1.

The government has said it will release a long term emissions reduction road map, prepared by Mr Taylor, for the nation ahead of Glasgow.

Nationals Senator and staunch climate policy opponent Matt Canavan said “very little detail” had been presented on the government’s net zero policy and he needed more specifics before he could contemplate backing it.

“I’m being asked to marry a girl I haven’t met,” Senator Canavan said.

Gippsland MP Darren Chester, who wants Australia to commit to stronger climate action, said the government should develop a detailed policy for the future of regional economies under a net zero commitment.

“I want some more details on how regional Australia will look in 2050,” he said.

Nationals leader Barnaby Joyce defended his party’s right to delay their commitment to net zero and stand up for their communities, but on Tuesday conceded that Mr Morrison had the “prerogative” to decide the policy in cabinet.