WORKING families on low wages in two-thirds of the country can't afford to privately rent without turning to housing benefit.

That's according to new research from housing charity Shelter, which found that just under 500,000 families who privately rent also receive housing benefit. 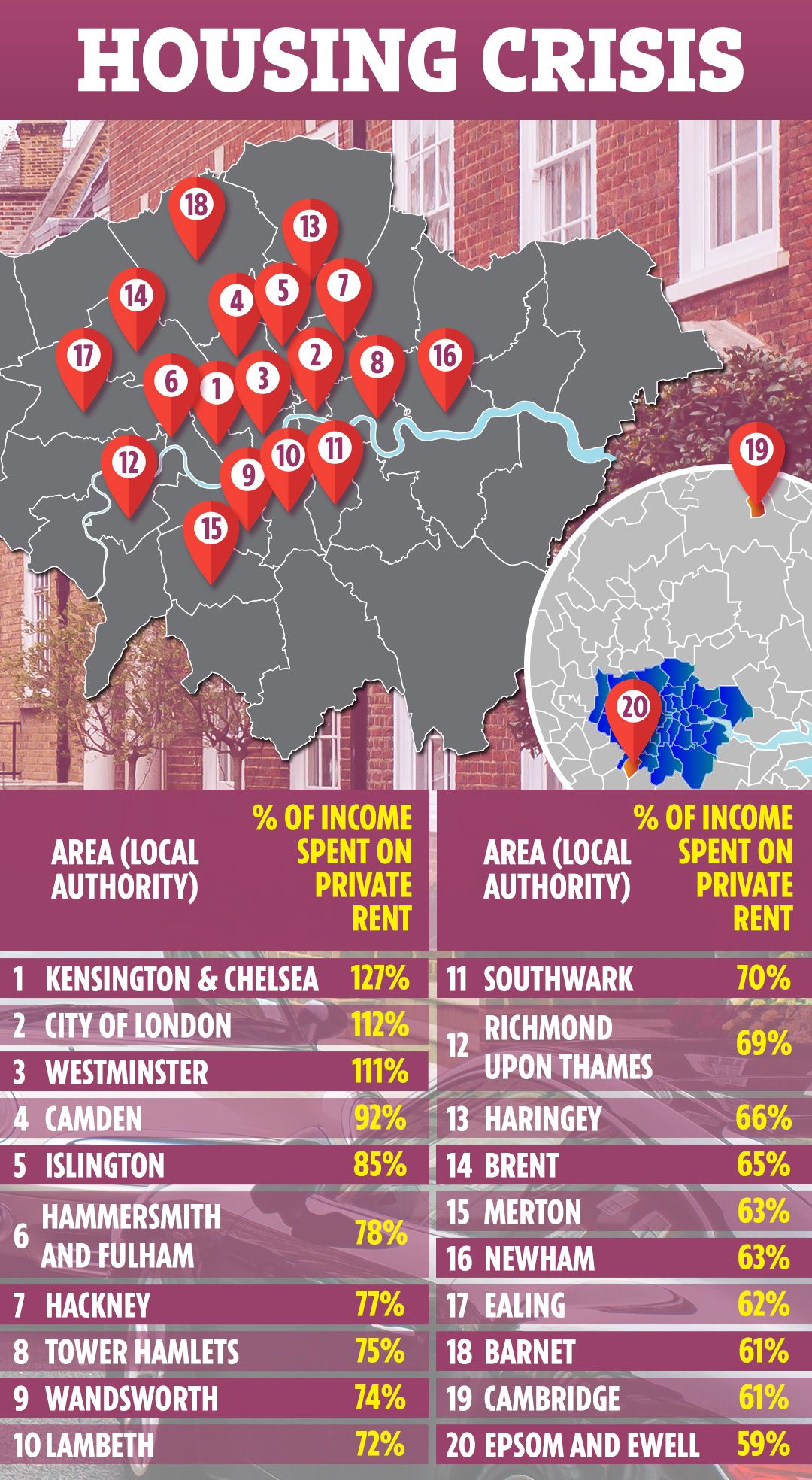 And worryingly, some households are spending MORE than their monthly income on rent payments.

That’s before paying for any other essential costs such as childcare, food or utility bills.

The housing charity analysed average private rents for two-bedroom homes in every local council area in England and compared this to the wages families in lower paid jobs – with one adult working full-time and another part-time – receive.

It found there are 218 council areas where families earning a low wage would be forced to spend more than 30 per cent of their salary on rent.

How to haggle with your landlord and bring down your rent

WHEN you first sign your tenancy agreement with your landlord your rent should be agreed either in writing or verbally.

To increase your rent your landlord must send you a section 13 notice which gives you a month's notice in writing telling you how much your rent will be increased by and the date when your rent will go up.

At this stage you should try to talk to your landlord and come to a fair agreement on how much rent you should pay.

Your landlord can only raise your rent if you agree to the increased price.

Matt Hutchinson, communications director for flatsharing website SpareRoom.com said that if you are a good tenant then you've got bargaining power.

"The first thing to bear in mind is that demand is lower at the moment than over the past couple of years.

"That means you’ve got a bit more bargaining power, especially if you’ve been a good tenant, as your landlord won’t want the expense and hassle of having to find another tenant and even potentially face a period with the property empty.

"Failing that, it’s worth seeing if you can get anything thrown in with a rent increase, such as minor bits of redecorating or any bills."

Landbay have a free rent check service to see how much rent you should be paying in your area.

You can find the rent check service here.

Find out more about how to haggle with your landlord to bring your rent down here.

But it's not only the capital where the picture is bleak. In Cambridge, a family would have to fork out 61 per cent of their wages on an average rent, while it's 57 per cent in Oxford and 50 per cent in Bristol.

Additional analysis of rent costs for families with only one full-time worker on a low wage proved even more shocking.

While in 228 (70 per cent of) areas families spend more than 40 per cent of their income on private rent.

In contrast, social rents were found to be affordable for working families on low wages in 100 per cent of the country.

The maximum a family with one full and one part-time worker would have to spend on social rent is 26 per cent of their annual income in Hertsmere.

Shelter is now calling on the government to create more social housing.

Polly Neate, chief executive of Shelter, said: “Families in lower-paid jobs are having their bank balances bled dry by expensive private rents across huge swathes of the country.

“The steep decline in social housing has left a growing number of families caught in a debilitating "rent-trap". It’s disgraceful that despite working every hour they can, many parents are now forced to rely on housing benefit to keep a roof over their children’s heads."

A spokesperson for the department for housing, communities and local government added: “We are committed to providing good quality social housing.

"We are investing £9billion to build more affordable homes across England and have abolished councils’ borrowing cap – allowing them to build a new generation of social housing.”

Rents have risen by the highest amount in two years as landlords hit back over government clampdowns.

But renters could soon move deposits between landlords instead of stumping up the cash upfront, under government plans.

Plus, here's how to get your landlord to fix damp or mould as thousands of renters live in unsafe homes.

THE Communities Secretary was last night told to reinstate a housing czar sacked for “racism” after a leftie mag apologised for cutting his quotes.

He was fired for anti-Semitic comments and appearing to slam the Chinese as robots.

But the New Statesman last night acknowledged that his views “were not accurately represented”.

The Department for Housing indicated it would not be bringing him back.

But Steve Baker MP said: “He should certainly get his job back.”