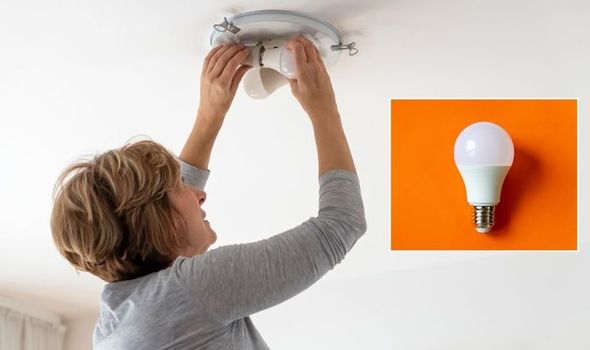 Originally due to come into force in September, the Government announced plans for the ban last year. It comes as part of the UK’s wider efforts to tackle climate change, with retailers no longer able to sell the majority of halogen bulbs for general household use from today.

The move means households will have to swap over to LED alternatives when the halogen lights eventually stop working.

Although pricier to buy initially, LED lights are said to provide savings on electricity bills in the long run.

The UK began to phase out the sale of higher-energy halogen light bulbs in 2018 and around two-thirds of bulbs sold in the country are already LED.

The light bulbs are more energy efficient, with them emitting less heat and more light.

Most LED bulbs are available with Edison or bayonet fittings, meaning it should be easier to swap a halogen bulb for an LED alternative.

However, there may be an issue if the halogen bulb is fitted directly into the ceiling, as this may not be compatible with new LEDs.

The Government has also said that the average household will save £75 a year on energy bills.

New labels have also started to feature on boxes, with energy efficiency now displayed on a scale from A to G.

This will help customers make the right choice and pick the most environmentally friendly lights.

Earlier this year, Chief Executive of Signify UK, which owns Philips lighting, Stephen Rouatt, said: “We welcome the Government’s next step in the transition towards more sustainable lighting products.

“Using energy-efficient LED equivalents for halogen and fluorescent lighting on an even broader scale will significantly help the UK on its journey to decarbonisation, as well as lowering the annual electricity bills for consumers.”

Fluorescent light bulbs will also be removed from shelves from September 2023.

These types of lights are typically used in offices, such as strip lights.

The Government has also made other plans to help tackle the climate issue.

This includes the right to repair rules which came into force back in July.

Previously, when an electrical item broke, Britons would find it easier to replace the item rather than repair it due to manufacturers not storing spare parts.

Under the new law, manufacturers will now store spare parts so that white goods and electrical items can be replaced easily.

It means anyone buying white goods or electrical items can find spare parts for their products in case the item breaks out of warranty.

Electric motors, power transformers and welding equipment are also included and have a right to be repaired.