A record-breaking heat wave eased for coastal cities in the Pacific Northwest but tightened its grip inland, threatening people, crops and wildlife.

After several days above 100 degrees, temperatures Tuesday topped out at 84 in Seattle and 93 in Portland, Ore., as shifting winds pulled cooler air in from the Pacific Ocean. Both cities set record highs Monday, with Seattle hitting 108 and Portland 116.

Here in Yakima, the center of a rich fruit-growing region in central Washington, high temperatures reached a record 113 degrees on Tuesday.

The National Weather Service continued to warn of dangerous heat in the Northwest, with record-shattering temperatures in the region’s interior for much of the week. The dome of heat covering the region has also brought the highest temperatures ever seen in Canada, with the town of Lytton in British Columbia reaching nearly 118 degrees Tuesday, a third national record in as many days.

WHAT IS A HEAT DOME? PACIFIC NORTHWEST BOILS UNDER ITS EFFECTS

The chief coroner in British Columbia said the number of deaths recorded in Canada’s westernmost province over the four-day period ended Monday midafternoon—coinciding with the start of the heat wave—was nearly double the average for a comparable 96-hour period. The coroner said the 233 deaths recorded over the period might increase once fresh data arrive, and investigators would determine whether heat played a role in the increase.

Avista Utilities said it planned one-hour rolling blackouts for some customers in Spokane, Wash., on Tuesday because of the extremely high energy demand, following unplanned blackouts on Monday that affected thousands of customers. The utility urged customers to conserve energy as much as possible. The high temperature in Spokane Tuesday was a record 109.

The city of Yakima set up two cooling centers available to residents through July 1, when the excessive heat warning is expected to lift, the city said.

Meanwhile, fruit farmers and wildlife officials were left scrambling to save crops and fish.

"We are in uncharted territory for this sort of heat wave for this duration," said James Michael, vice president of marketing for the Northwest Cherry Growers, a state agency promotion office. "Guys will do whatever they can to salvage the greatest portion of their crop."

Farmworkers at Matson Fruit Co. just outside Yakima, got an early start Tuesday morning. Crews trucked into the orchards by 5 a.m. in order to finish by 10 a.m.—several hours ahead of their typical schedule—in hopes of beating the heat.

By 10 a.m. the road surrounding the apple, cherry and pear orchards was broaching 90 degrees but a short walk into the orchards revealed the real dangers: the sweltering sun above; only a rare breeze through the lush trees dotted with bright red cherries, still three weeks from harvest; and an oppressive humidity trapped by the dense foliage and grass underfoot. Sweat was dripping even on those who stood still, and just to breathe took effort.

"As a farmer, we’re always fighting the weather," said Jordan Matson, manager of Matson Fruit. But the timing and duration of this heat wave, he said, "is a new one." 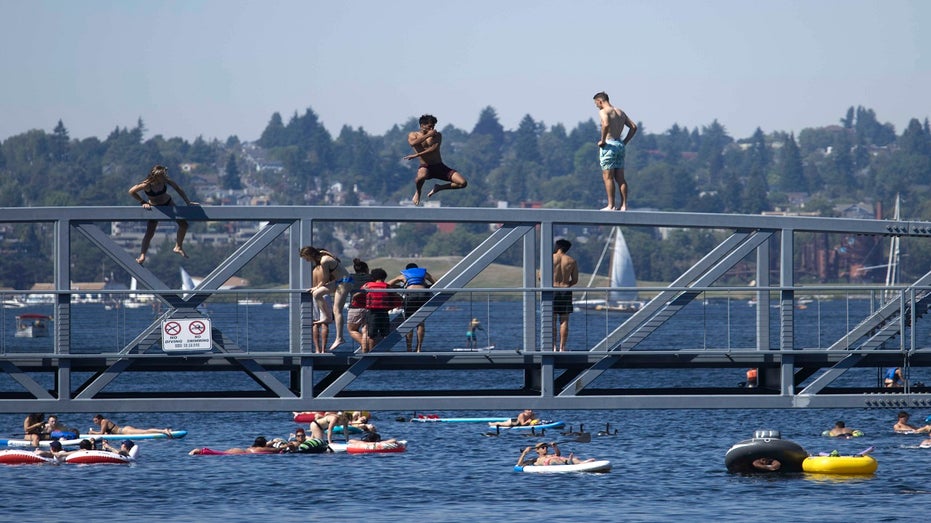 Two people jump from a pedestrian bridge at Lake Union Park into the water during a heat wave hitting the Pacific Northwest, Sunday, June 27, 2021, in Seattle. A day earlier, a record high was set for the day with more record highs expected today and

Rosa Balbuena, a site supervisor leading a crew of 23 workers thinning apple trees, said her team was very aware of the extraordinary danger of high temperatures—and the symptoms of heat-related illnesses—but that they had managed the morning without injury.

By 10 a.m., the only workers still in the orchards were four men monitoring the irrigation lines—crucial infrastructure in this heat, and susceptible to clogs. On the edge of a stand of Honeycrisp apples, farmworker Mario Barrera pulled a filter from the chest-high pipe of the irrigation line, rinsing mud and debris in the still-running water. His dripping long sleeves gave him some relief from the heat, he said, as did traveling between the orchards on an open-air, 4×4 vehicle. Normally he would wear full rain gear to protect himself from the discomfort of being constantly wet. Today, it felt good, he said.

Back at the Matson family’s packing plant in town, workers filled plastic bags of apples—cold-stored since the fall—for retailers like Kroger, Sam’s Club and Walmart. The plant is cooled by something akin to a swamp cooler, said Mr. Matson, who manages the packing side of his family’s business. Here they were monitoring inside temperatures closely: Once the cooling system struggled to keep inside temperatures at 90 degrees, they planned to shut down for the day.

Meanwhile, federal and state agencies were working to protect the endangered Snake River sockeye salmon, which make an annual 800-mile journey to spawn each year. The U.S. Army Corps of Engineers has been releasing water from Idaho’s Dworshak Dam to cool river temperatures downstream on the Snake River. When river temperatures reach 68 degrees, the salmon become vulnerable to disease, predators and death, said Michael Milstein of the National Marine Fisheries Service.

"We’re tapping that earlier in the year than we typically would like to," Mr. Milstein said, "but there’s not much choice because of how extreme temperatures are now."

Location data collected from tagged fish suggests sockeye salmon could reach Lower Granite Dam in Washington state within the week, Mr. Milstein said. When they do, Idaho Fish and Game officials are prepared to collect fish at the dam, load them into trucks, and drive them the rest of the way to their spawning areas in central Idaho. They will make the call about whether to do that later if water temperatures are still dangerously high, he said.

"Nobody likes putting salmon in trucks," Mr. Milstein said, "but when the alternative is essentially watching them die, this is just a lot more secure." Some years, only a few hundred of this endangered species make the trip, so "we want to give every one of them the best chance possible."

Click here to read more of the Wall Street Journal.