Have breakfast ready when you wake up: Slow cook pro shows off her VERY impressive ‘cheat’s’ meal – complete sausages, mushrooms and tomatoes

An amateur home cook has shared images of the incredible big breakfast she prepared using her slow cooker.

‘Here’s my attempt at the big brekky..I think I put way too much in, wish me luck!’ she wrote.

All the food was placed in a 7-litre Breville device and was cooked overnight. 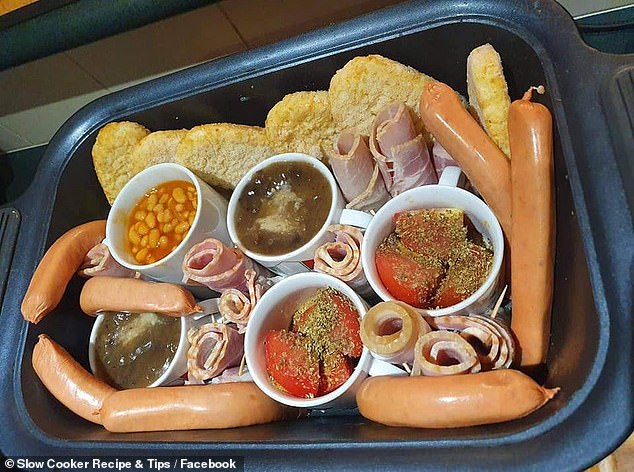 Sarah also placed butter, oil, oregano and garlic powder in a mug with the mushrooms as a type of seasoning.

While the morning meal looked mouthwatering, she said the end result was too ‘mushy’ but she will reattempt the breakfast again in future.

The perk of cooking all the food in a slow cooker is the minimal mess made compared to using a pan on the stove or the oven.

After sharing the delicious homemade meal on social media, the post was liked and shared by hundreds of other home cooks – but some suggested using an air fryer instead.

‘Thanks for sharing this. I would be keen to try out some of the components there,’ one person wrote.

To prevent condensation, one woman suggested wrapping the lid of the slow cooker in a towel.

Another suggested packing the slow cooker with less food.