Stevie Nicks has compared his work to the Beatles. John Mayer plays guitar on the new album and has praised his “honest, beautiful songcraft”. Almost Famous director and sometime Rolling Stone journalist Cameron Crowe wrote that his voice reminded him of a young Rod Stewart. And Coldplay’s Chris Martin described him as the most handsome man in the world.

“He” is Harry Styles, the 28-year-old former member of world-beating boy band One Direction, now one of the world’s biggest solo pop stars – a flashy nail polish-and-blouse-wearing heart-throb who has coupled with some of the most attractive women on the planet (past flames include Taylor Swift and Kendall Jenner; his current partner is actor and director Olivia Wilde) while maintaining a reputation as one of the nicest guys in the biz. 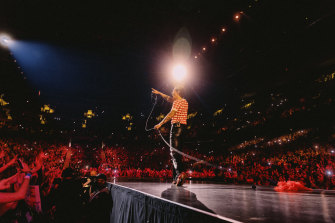 Harry Styles celebrated the release of his new album with a one-night only concert in New York. Credit:

At UBS Arena in New York’s Long Island on Friday night, Styles treated 19,000 fans to the first concert supporting his third solo album, Harry’s House, released that morning. Among the crowd, the standout accessory was feather boas, a nod to the purple boa Styles paired with a tweed blazer at the Grammys in March. This writer, informed by the experience of reviewing One Direction nine years ago, deemed a different accessory more essential: earplugs.

I only needed to wear one, as it turned out. Styles’ devotees, tweens back in 2013, have grown up along with him, and while there was plenty of screaming, it wasn’t at quite the same volume as girls on the cusp of adolescence, the loudest fans you’ll ever meet.

Styles has spent the past 12 years being screamed at. One Direction, the band he formed in 2010 with fellow British X-Factor contestants and teen pinups Zayn Malik, Liam Payne, Louis Tomlinson and Niall Horan, was the first boy band of the social media age, i.e. ubiquitous and enormous. 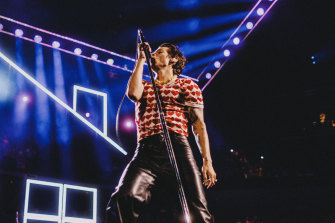 Harry: The man, the myth, the legend.Credit:

Their phenomenal reign ended in 2015, when Malik quit the band mid-tour and the remaining members went their separate ways a year later. All have since had high-profile romances and solo careers of varying quality and impact, Malik’s being the most notable. But none have come close to being as successful and universally beloved as Styles.

Is this testament to the quality of his music? Well, sort of. It’s good and occasionally great stuff (Nicks et al. might have been overegging his talents somewhat), the sort of thing that has kept the fires burning for 1D fans and attracted new ones who might have come to Styles through an algorithmic suggestion following a streamed Maroon 5 song. More interesting is his image, increasingly edgy and complex without involving stints in jail or rehab. No longer contractually obligated to stay squeaky clean, the sinewy, tattooed Styles has enthused about gorging on magic mushrooms at uber-producer Rick Rubin’s Shangri-La studio in Malibu, written songs about the female orgasm, shrugged off questions about his sexuality, and was invited by Vogue editor Anna Wintour to co-host the Met Gala in 2019, gracing the red carpet in a sheer black frilly Gucci blouse and extremely high-waisted pants. He also comes across as unfailingly, authentically kind – the kind of guy that would help a little old lady cross the street then graciously accept her invitation to come over for tea and biscuits. 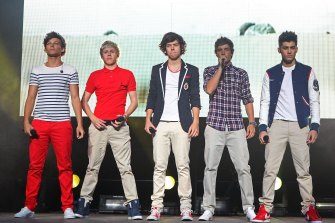 Baby Harry Styles (middle) with One Direction on stage in Australia in 2012. Credit:Scott Barbour

To say his third album is much anticipated is an understatement – Styles’ every hiccup is met with a seismic reaction from his fans. But he is riding particularly high after a triumphant Coachella Festival headline slot – Styles’ first festival performance – where he brought out Shania Twain for renditions of Man, I Feel Like a Woman and Still the One, Lizzo for a duet of Gloria Gaynor’s I Will Survive, and pranced across the stage in a sparkling technicolour jumpsuit like Freddie Mercury incarnate. 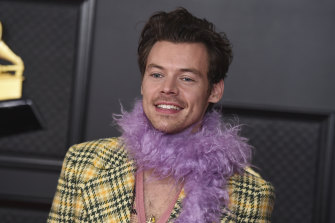 Harry Styles and his purple feather boa at the Grammys in 2021.Credit:AP

Friday’s show was a more low-key affair. Basic stage design featured a huge neon house that was giving Playschool vibes, and Harry’s outfit was comparatively demure – a white tee covered in red hearts, leather trousers, red Adidas trainers, and another favourite accessory, a chunky beaded necklace (yellow). His performance, while wholehearted, wasn’t Coachella-fierce, but he’s probably saving that spectacle for the album tour proper (he’s playing 10 nights at the 20,000-capacity Madison Square Garden arena in Manhattan later this year, and will finally hit Australia in February next year after the pandemic saw his 2020 tour cancelled).

That he performed the new album in full, in its running order, was no issue for the New York crowd, already capable of singing along just hours after its release (and even louder when he played older songs in the concert’s second half). The new album is good too, if not quite as thrilling as his second, Fine Line, where he adopted the formula he’s sticking with here: polished, playful pop with enough interesting details to lend it credibility, without ever demanding too much from his listeners.

Lead single And It Was runs at an agreeable canter, its tinkling synth lines evoking a lost ’80s new-wave hit; Music for a Sushi Restaurant is a jaunty album and show opener loaded with sultry bass and a peppy sax breakdown. The downtempo, funky Cinema is sonically pleasing if laden with some of the cringier lines from a lyricist not known for his profundity. Styles has always revealed personal details in song rather than in interviews, and here he’s quite clearly the “pop” to Wilde’s “cinema”. “You got/You got the cinema/I bring the pop to the cinema/You pop when we get intimate.” 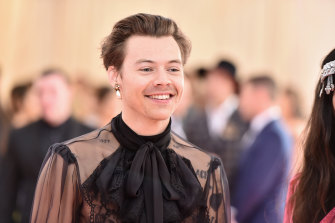 Best are the album’s ballads, when Styles’ voice shines brightest and is most emotionally resonant. Little Freak, an ode to a past love, is sweet both musically and in content: “I’m not worried about where you are/or who you’ll go home to/I’m just thinking about you.” Matilda, inspired by a woman who revealed her trauma to Styles, is equally lovely and reflective.

Then it’s back to spicy Harry, causing eruptions with a sexy hip wiggle or when revisiting memorable quips from concerts past, like when he fudges and restarts a song then describes it as “edging”, to wild screams (yes, Styles’ fans have definitely grown up). And it’s genuinely moving when Styles retrieves a Ukrainian flag from a fan and raises it above his head, collecting a rainbow Pride Flag to wave along with it on his way back to the main stage.

Most pop fans would agree that it’s hard to hate Styles’ music, and it’s hard to dislike Styles, who is remarkably well adjusted for a genetically blessed teen superstar. The house that Harry’s built is a place for one and all to “feel free to be who you want to be”. And living proof that nice guys don’t have to finish last.

To read more from Spectrum, visit our page here.