I want to divorce my husband who I separated from 20 years ago, but I don’t know if he’s alive or dead

A woman who has been separated from her husband for more than two decades says she can’t track him down – and doesn’t know if she would still be able to divorce him.

The caller, on ITV’s This Morning, joined a phone-in with divorce coach Tom Nash to discuss her dilemma.

Going by ‘Angela’, the troubled woman admitted she is ‘stuck’ and has ‘made enquiries in the past’ – only to be advised she needed more of an idea on her former partner’s whereabouts.

To make matters more complicated, she said there is no intermediary or common link she could use to pass on the message.

‘I’ve been separated from my husband for over 20 years,’ she told a shocked Phillip Schofield and Holly Willoughby. ‘I don’t know where he is and I’d like to know how easy it would be for me to divorce him.’

A baffled Tom – who was taking in audience calls for Divorce Day, with January increasingly considered to be a busy time for serving papers – recommended seeking legal advice and being prepared for ‘additional court hoops to go through’.

He said this ‘doesn’t mean you can’t get divorced’ – but cautioned that it may take longer than Angela may hope.

While the divorce coach warned he isn’t a lawyer, Tom suggested alternative routes which could help Angela find her husband. 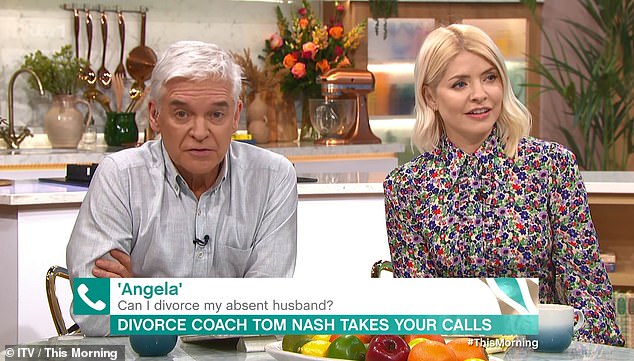 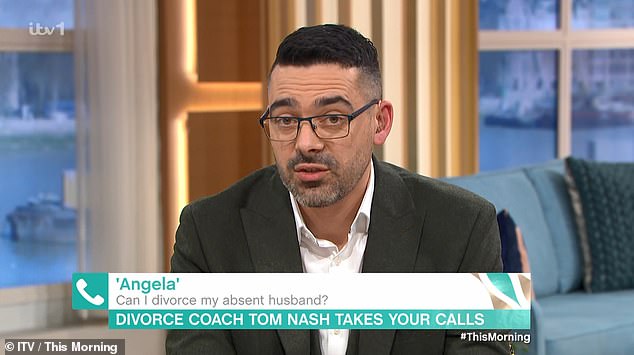 The caller, on ITV’s This Morning, struggled to find answers as she brought her dilemma for a phone-in with divorce coach Tom Nash (pictured)

Attempting to find and contact his employer was suggested, as well as seeking help from the DWP and or the HMRC.

‘Seek the right legal advice,’ he added. ‘Prepare…your questions or what you need to know to go through that process.’

It comes Diane Benussi, who runs a large matrimonial law firm in Birmingham, told the Daily Mail that clients had spoken of presenting the papers as a means of ‘taking back control’.

Ms Benussi, herself a divorcee, said: ‘I’ve had one female client recently who has explicitly told me she would be serving papers on her partner on his impending birthday. 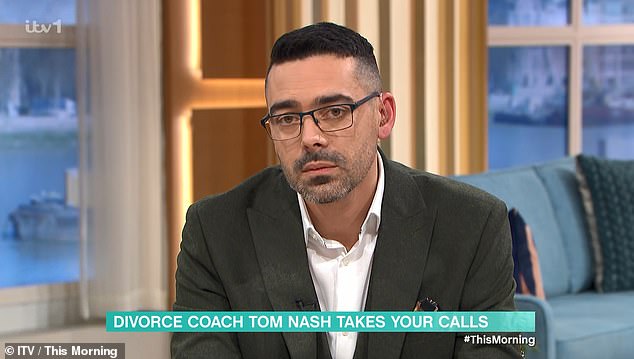 While the divorce coach warned he isn’t a lawyer, Tom suggested alternative routes which could help Angela find her husband

‘She wanted it to be her present to him. It’s about saying “notice me – this is serious”.’

Ms Benussi said her firm was also representing a client intent on serving papers on an anniversary.

Last year landmark reforms were introduced aimed at reducing conflict between warring couples by opening the door to no-fault divorce.

Mrs Benussi said that prior to the reforms, she saw evidence of a ‘power imbalance’ within separating couples – when the petitioner was in charge of proceedings.

‘Maybe there’s an element of people still wanting to flex their muscles a bit by choosing an important date, such as a birthday, Christmas or an anniversary, to trigger the separation’, Ms Benussi added.

But while she said the festive season could tip couples who don’t usually spend time together over the edge, she believed most planned for divorce well in advance.