This is the question my daughter asked after she’d heard news reports about the sacking of former Wallabies star, Israel Folau, following his hateful comments on social media.

My daughter is nine so she may not have any sense of her sexual orientation, yet Folau’s comments troubled her for days. 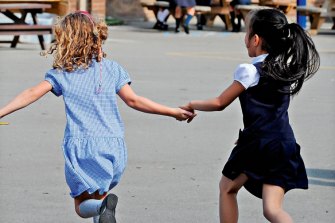 Children hear about Israel Folau’s homophobic comments, and they have questions.Credit:Paul Heyes

Her question is doubly shocking given she has two gay uncles, we speak openly about homosexuality in our family and her father and I could not care less about the gender of the people she chooses to love. Oh yeah, and we also don’t believe in hell.

It also made me realise how very wrong it would be to reduce this issue to a mere contractual matter between Folau and Rugby Australia, or worse, to defend Folau’s "religious freedom" without any acknowledgement or concern about the harm that it undoubtably causes.

If my daughter was disturbed by Folau’s comments, imagine how much more traumatic and troubling his comments are to children who identify as gay, or to those who wonder if they might be.

A childhood friend of mine, Reuben McCulloch, put this into more perspective.

“I've always been ashamed of being gay,” says McCulloch. “From an early age, from the primary school playground, through high school and even to this day, we are told that who we are is not 'normal'.”

Growing up, I was oblivious to the impact that our homophobic community — read suburban Brisbane in the ‘80s and early ‘90s — had the developing identity and sense of self-worth of my friend.

“The footprint that the bullying, abuse and social values during your formative years leaves on your spirit and soul, in some cases like mine are very difficult to shift,” he tells me now.

Growing up I was oblivious to the impact that our homophobic community, Brisbane in the ‘80s and early ‘90s, had on my friend’s self worth.

The homophobic jokes, the “fag” pranks such as boys covering school books with the word “fag”, and yes, people in authority declaring that hell awaits him, have all contributed to McCulloch feeling ashamed, unacceptable and unlovable for his entire life.

“It's a lonely existence, growing up in a world pretending to be someone you are not. Running away geographically, but more often using substances in an attempt to stop the negative voices in my head and escape my reality,” he says.

“My self-hatred and subsequent substance abuse has seen me hospitalized numerous times, in detox's and rehabilitation services. This has piled more shame on top of shame.”

McCulloch does not deny Folau his right to his opinions and beliefs, but he does object to him using his position and influence to spread hate and fear to a wide audience.

“They have no idea of the effect that these messages have on the people they are vilifying,” says McCulloch. “People who feel marginalised and isolated from their peers often escape in a fantasy world of their idols, whether they be musicians, actor's or sporting heroes. These messages of non-acceptance can have dire consequences.”

McCulloch’s experience is, sadly, not unusual. Research shows that LGBTI young people aged 16 to 27 are five times more likely to attempt suicide compared to the general population. They experience poorer mental health outcomes than their peers as a direct result of the stigma, prejudice, discrimination and abuse they experience just for being themselves.

Folau, who last week launched a crowdfunding campaign aiming to raise $3 million to cover his legal bills in his appeal against his contract termination by Rugby Australia, defended his homophobic post as “an act of love and compassion.”

They have no idea of the effect that these messages have on the people they are vilifying.

When I think of how my friend has suffered from homophobia his whole life, and all the boys and girls, past and present, who will be deeply wounded and traumatised by Folau’s words, it is unfathomable how anyone could ever justify them as loving or compassionate.

It’s not uncommon to use ancient texts to provide justification for hatred, but if Folau wants to play the bible card, let’s talk about what else he could do with $3 million instead of defending his right to tell already vulnerable and marginalised people that hell awaits them.

I’m no theologian, but I seem to recall the poor and the sick get particular mention in the bible. If Folau wants to live a Christian life, as he claims, perhaps he should be crowdfunding for people in actual need.

One thing’s for sure, Folau’s views have made my husband and me even more determined to keep his “lifestyle choice” of hatred and prejudice from infecting our daughters’ world view.