‘I’m in gay heaven’: A night with the (wannabe) Spice Girls

The screaming starts well before the show begins.

More than 600 women (most 35-45 years old, many with tightly wound space buns atop their heads) are howling the words to Hanson’s 1997 hit MMMBop and Steps’ 5, 6, 7, 8. The room is heaving, pulsating with pom poms, glitter and leopard print. 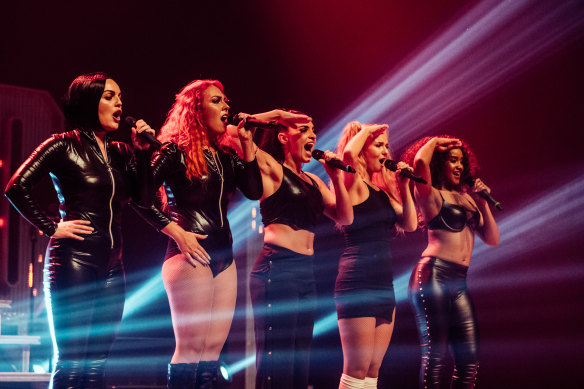 But the decibels hit an all-time high as five familiar figures storm the stage, the blinding lights reflecting off their sequin bodysuits and track pants. The Spice Girls’ anthemic single Wannabe launches like a rallying cry and a man in his mid-30s stands in the middle of the room, eyes closed and arms raised. He’s swaying in time, a half-empty champagne flute in each hand.

Up the back, someone yells “I’M IN GAY HEAVEN” to everyone and no one.

This is a taste of what you can expect from Wannabe: The Spice Girls Show, the UK’s premier Spice Girls tribute show which is touring Australia this month. Part stage show, part concert, 100 per cent party, it’s an act which emphatically proves the popularity and marketability of ’90s nostalgia and will no doubt make audiences reflect on their age, too.

Yes, millennials have officially aged into the tribute show circuit. 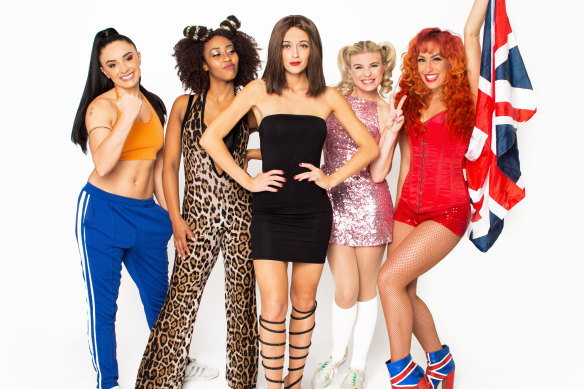 The crowd for Wannabe is predominantly women, though there’s a small contingent of ecstatic gay men and bewildered straight husbands too.Credit:Red Entertainment

“It does make you realise that we’re getting older,” says Leanne Kyte, the 31-year-old actor and singer who plays Posh Spice. “But it’s nice to keep the music alive, especially for people who have never had the opportunity to see the Spice Girls.”

However, as both she and the show’s production team are keen to point out, this isn’t a tribute act in the conventional “Vegas lookalike” sense (a sell that no doubt helps the ageing millennials who associate tributes with older acts like Elvis and ABBA): “We’re not trying to be them or trying to take their place. The show is a celebration of their music and what they stood for … It was all about fun and girl power.”

Touring since 2017 in the UK and around the world, Wannabe promises to “turn back the clock 20 years” with classic performances of the group’s big hits as well as original arrangements and mega-mixes plus iconic dance routines and costumes.

Though the show is predominantly a concert, there is a loosely stitched narrative that charts the group’s rise and fall, and the girls’ subsequent solo careers. Geri Halliwell’s cover of It’s Raining Men (performed by Irish singer and dancer Shannan Cairns) is the clear standout of the solo performances, with four shirtless “Spice Boy” dancers offering extra hens’ night-style entertainment.

There’s also a (quite odd) tribute paid to the era more generally. Before the performance of Holler, for example, Sporty Spice (played by Rhiannon Porter, who represented the UK in Eurovision in 2018) asks the audience for “an absolutely massive cheer for the unbreakable Nokia 3210″. The girls stand before neon images of the phone, which was released right before the turn of the millennium, and joke about how easy things used to be before iPhones and Tinder.

With an arm raised before the crowd Kyte yells, “Holler if you used to play Snake!”

This kind of naked nostalgia for the ’90s has been cultivated through the internet over the past decade or more, and is increasingly spilling out (and being capitalised on) in the real world.

Australia has recently hosted throwback concert series like “I Love the ’90s” and “Made in the ’90s” featuring acts like Vanilla Ice and Coolio. And, ahead of the 2019 So Pop festival (which also featured Eiffel 65 and Vengaboys), ’90s icons Aqua told this masthead they had “actually never been so hot and in-demand”.

While some millennials will find it cringeworthy to make such bold attempts to recapture their youth (especially now there’s a whole younger generation mocking us for it), the cast insists there’s something special there too.

“The other day we had women bring their children, and I found that really touching,” says Keri Rae, who plays Baby Spice. “They were doing all the Stop choreography – like, the kids knew it. The parents must have taught them… You know, the Spice Girls aren’t on TikTok.”

There are also regularly a number of people video calling their mums during Mama.

“The smiles that you see on people’s faces are just beautiful,” says actress Amelia Walker, who has recently joined the cast as Scary Spice. “I just feel like the women that come and watch have a sistership with you.”

As the crowd spills out the doors of the Tivoli on the last night of Wannabe’s Brisbane run, it’s hard to disagree. There’s a real sense of the rebellious frenzy the Spice Girls inspired in a generation of girls more than two decades prior. One younger woman tells her friend “that was the most random thing I’ve ever seen… but I had a great time” while another, a fair bit older and a lot drunker, very earnestly says, “That was the best night of my life”.

Seconds later, she inexplicably runs down the street and steals a traffic cone.

Wannabe: The Spice Girls Show is touring Newcastle, Sydney, Wollongong, Shepparton, Melbourne and Adelaide this month. The writer’s flights and accommodation in Brisbane were covered by Wannabe’s local promoter, The Prestige Presents.