For years we have been talking about the sexist and misogynistic culture of Parliament House, and the politics it marinates in.

It took an allegation of rape on a couch in a ministerial office in Parliament House, for any sort of concrete action to be taken and an apology to one victim to issue forth. 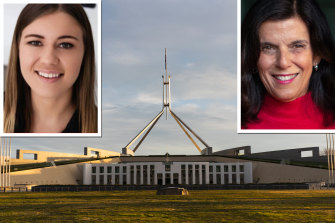 The political workplace culture has been the subject of criticism for years.Credit:Provided

That fact in itself might give you a clue, if you’re still unsure, as to the enormous barriers women still face when they seek redress (let alone justice) for abuse and harassment.

The Prime Minister has announced a structural review of the way politicians and their staff are held to account over harassment and abuse complaints.

His department’s deputy secretary, Stephanie Foster, will lead the review of the complaints process and Liberal backbencher Celia Hammond, a former university chancellor, will review cultural problems in the treatment of women.

When it comes to complaints of what one former MP called “an entrenched culture of anti-woman”, this is not the Liberal Party’s first rodeo.

A cultural review might sound like a solid response to the problem, until you remember Morrison already announced one such review, back in 2018, following revelations of sexist bullying and intimidation around the “coup” against Malcolm Turnbull.

Morrison emerged triumphant from the ensuing leadership battle, which he later labelled a “pretty torrid ordeal”.

Banks also warned of an “entrenched culture of anti-women within the Liberal party”.

“Yes, the leadership coup week was intense, but it is an entrenched culture there,” she said.

Morrison said he was going to do something about it.

“I will continue to consult with my colleagues about ensuring there can be no question about the culture of the Liberal Party,” he said.

Just as he did on Tuesday, back then Morrison cited his two daughters to make it clear that he had no tolerance for bullying.

He commissioned a review into the Liberal culture by party elders Brian Loughnane and Chris McDiven.

Then, in July 2019, this paper’s Eryk Bagshaw reported that two young women were sexually assaulted by Liberal colleagues while working as Liberal staffers.

One of the women was working for a federal Liberal politician when the assault occurred.

Then senator Arthur Sinodinos said the Loughnane-McDiven review should be expedited.

Liberal Party veteran Katherine Greiner said that “you can have as many quotas as you like but if you still have bovver boy tactics in the organisational structure, you don’t really get systemic change”.

Then all talk of the review went very quiet, so quiet it was easy for everybody to forget about it.

Morrison said he was unaware until Monday of the rape of former Liberal staffer Brittany Higgins against an unnamed fellow staffer after a drunken night out before the last election in 2019.

In his response on Tuesday morning, the Prime Minister apologised to Ms Higgins for the way the incident was handled, expressed empathy for her alleged ordeal, and again referenced his two daughters.

Morrison said he had discussed the issue with his wife Jenny, who had a “way of clarifying things” for him.

“She said to me, ‘You have to think about this as a father first. What would you want to happen if it were our girls?’,” he said.

This comment was perhaps meant to put a personal complexion on what is a deeply emotive issue, but it was misguided.

Women are not the wards of men. They should not have to rely upon the paternalistic care and protection of men in power to be safe.

Men should not have to imagine a victim as somehow child-like and morally innocent in order to recognise the harm systems do to women.

And it should not take a rape in the centre of power for the institutional problem to be treated with any real seriousness.