If the free TV commercial networks have their way, it’s going to be a year of fun and games. Perhaps they’re mindful of the fact that viewers are seeking light relief and that, following habits established during lockdowns, parents want programs they can watch with their kids. They’ll certainly be aware that novelty shows such as The Masked Singer, LEGO Masters and Australian Ninja Warrior have attracted healthy audiences.

So we’re being treated to family-friendly fare: Holey Moley and Ultimate Tag on Seven and The Cube on Ten. The trio fall into the growing group nicknamed “kidult”, which, depending on your chosen definition, either means shows designed to appeal to kids and adults, or those that appeal to adults with childish tastes. 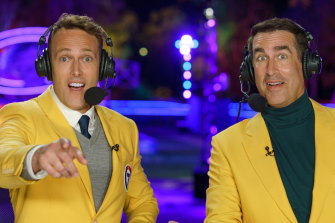 True to their name as broadcasters, the networks don’t want to go niche with prime-time productions on their primary channels. They want the six-to-60 crowd, viewers of all ages. But the problem with this trio isn’t that they aim for light-hearted, widely appealing viewing; it’s their quality. They don’t dazzle or delight, and they only fitfully achieve their main goal, which is to entertain. They’re an unfortunate bunch, straining to confect a buzz of excitement but becoming irritatingly repetitive as they play out.

First cab off the kidult rank was Holey Moley, based on a format that debuted in the United States. A manic coupling of It’s a Knockout and mini-golf, it endeavours to create a carnival atmosphere: noisy, loaded with colour and movement, enlivened by vaudevillian humour. Clowns throw pies in contestants’ faces and unsuccessful hopefuls are dunked in water.

Unabashedly cheesy, it’s stuffed with cornball gags provided mainly by US import Rob Riggle, who commentates alongside straight-man Matt Shirvington. Riggle’s patter is riddled with innuendo, perhaps with the idea of keeping the adults amused. There are reliably regular cracks about the Uranus hole, with another example coming in the grand final, when a putt failed to rebound satisfactorily: “I think it’s lube on the ball,” Riggle opined. “When your balls are lubed, they perform differently.”

Then came The Cube (Wednesdays, Ten, 7.30pm), based on a British format and hosted by Andy Lee. “This is the show where you don’t have to cook, you don’t have to sing, you don’t have to build anything. You just have to hold your nerve,” he says. Its gimmick is that the challenges take place in a large Perspex box and come with tight time limits. 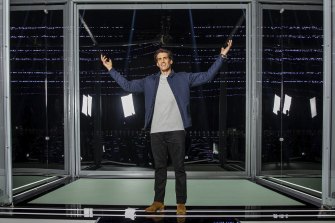 It might be clearing a box of 1000 balls in 25 seconds, or sliding the cases off eight poles in 15 seconds without knocking any of them over. So you don’t need to be a ninja warrior to have a shot in this arena. A focused and determined granny who’s a dart champ could be a fine partner as contestants compete in pairs.

But the big box limits how visually exciting the production can be, and it’s also drawn out and repetitive. The “tactical assessments” of how attempts failed and might be improved for the next round run along the lines of “Well, I need to go faster”.

Hosted by Abbey Gelmi and the busy Shirvington, the most recent kidult arrival is Ultimate Tag (Mondays and Tuesdays, Seven, 7.30pm), another international format and basically a game of chasey enacted on obstacle courses. “Everyday Australians” have to try to outrun “pro-taggers” with names such as Hammer and Cyclone. The show’s mantra, “Don’t get caught!”, is regularly chanted by an excited audience that appears to have been fed a lot of lollies.

One of the Tag’s hooks, as with Holey Moley, is the participation of “everyday Australians”. Seven seems enamoured of the idea of average Joes and Joannes having a shot at TV glory and at the $100,000 grand prizes, which are spruiked as life-changing amounts. 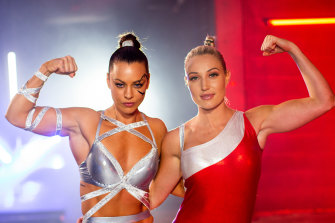 Ricochet and Riot are among the “ordinary” Aussies who compete in Ultimate Tag.Credit:Seven Network

Seven seems to be suggesting that these shows are designed for average Aussies who just wanna have fun and not those high-falutin’ elites. But the ratings haven’t been delivering the kinds of numbers that get the champagne corks popping in the network executive suites.

Holey Moley premiered with an impressive average national metro audience of 983,000; by the time of its grand final, it had lost half of them, slumping to 491,000. The Cube debuted with 567,000, but by its second week dropped to 351,000. It seems that viewers, enticed by energetic promotion and seeking fun family fare, are initially tuning in but, having sampled the goods, are not going back for more. Ultimate Tag was greeted by only 447,000.

Novelty shows, when they fail to fire, tend to sink with barely a trace. They’re easily forgettable. Remember the highly hyped 2018 show of games, created by Ellen DeGeneres and hosted by Grant Denyer? No? Exactly (Game of Games). Or the dog-grooming contest hosted by Rebel Wilson that opened Seven’s ratings season last year? No bells? (Pooch Perfect).

The hits in this area leave an impression: the intricate and imaginative costumes on Masked Singer; the striking challenges and physical prowess of contestants on Ninja Warrior; the creativity of contestants on LEGO Masters, as well as the clever pairing of host Hamish Blake with judge Ryan “Brickman” McNaught.

It’s hard to identify what might linger in the memory from the current kidult crop. But I’m guessing nothing.

Find out the next TV shows, streaming series and movies to add to your must-sees. Sign up to get it every Thursday