Sydneysiders are making compromises to find a balance of work and play in a city where it's increasingly difficult to get ahead.

As the cost of living rises and wages growth stagnates, many families are forced to weigh up the importance of housing size, location, cost, and proximity to schools, green (and blue) space and extracurricular experiences.

The trade-offs are complicated and varied, families report, but there's a common sentiment there's always something to juggle – even for those on above-average incomes.

So just what are the compromises that families on professional salaries are making?

'It's a lifestyle choice'

For Elspeth Ennion, living in Randwick means access to great cafes and restaurants and the beach.

“In summer, we go for a swim every chance we get and I go for a swim before work every day,” she says. “If we moved somewhere else – out west, for example – we could have a freestanding house, a much bigger place, but we prefer to have the townhouse and prior to this the flat and have access to all of that. We also don’t want to live somewhere where we have an hour-and-a-half commute each day and that’s a lifestyle choice.” 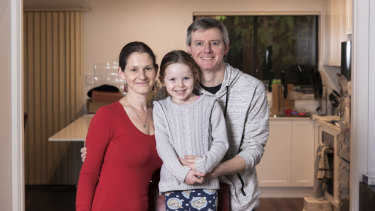 Elspeth Ennion and Mal Walters and their five-year-old daughter Anya at their Randwick townhouse.Credit:Christopher Pearce

Ennion, 42, and her husband Mal Walters, 47, are paying off a large mortgage on a three-bedroom townhouse in Randwick where they live with their five-year-old daughter Anya.

The couple still own the two-bedroom flat in the same suburb they bought 12 years ago; their former home is now their investment property, and the proximity of the University of NSW means the rental demand should remain strong.

Ennion knows how fortunate she is.

“We’re doing all right,” she says. “I’ve fallen into a career that pays reasonably well and I started investing early.”

She first bought shares at university, thanks to a part-time job that gave her an early education in investment. She now works as a product manager while Walters is a business analyst.

The main trade-off has been the amount of time Ennion is able to spend with Anya.

The couple’s financial choices meant Ennion had to return to work full time once Anya was 12 months old. With Walters also working and no relatives available to help, that meant five days of long daycare for Anya.

“I feel like I’ve won Lotto not paying daycare fees – that was $40,000 a year,” Ennion says. “I was very lucky to be able to salary sacrifice but not everyone’s in that position.”

While the family is yet to decide on high school for Anya, Ennion would prefer to stay in the public system if possible.

“I don’t really want to go private, I’d rather spend money paying the mortgage or taking holidays but it depends on the quality of the options and I also don’t want her having long commutes,” Ennion says. “High school is cheaper than daycare, even private.”

Before Anya was born, Ennion and Walters took overseas holidays every couple of years. They’ve kept it simple since becoming parents, but Ennion would love to start travelling again now that Anya is getting older and is especially keen to return to Africa.

Ennion does not plan to have any more children. She says finances are not the main reason but “would certainly be a consideration”.

“I’m the primary income earner and it’s a significant cost to take 12 months off and manage mortgages and another four years of daycare,” she says. “We could have done it but it would really have meant cutting down.”

Ennion would love to work four days a week, but her full-time salary is needed to pay the mortgage and the bills.

While Ennion and Walters have been able to get ahead, the high cost of living in Sydney means their sense of community has been eroded.

The couple had a “tight friendship circle” of people who had all studied together at the University of NSW, stayed in the area after graduation and socialised a couple of times a week. Now six or seven couples have moved to different parts of Sydney as they’ve made their own trade-offs to buy houses and raise children.

“They’re all spread out and because we’ve all got children, it makes it harder to catch up,” she says.

'We bought what we could afford'

Niro Thambipillay, 40, lives with his wife Abi and two young sons in an apartment in Pymble.

“We chose the area first and then bought what we could afford,” Thambipillay says. “If we want a house for a similar price, we’d have to move a lot further away.”

His wife’s ability to commute to her job in the CBD was a key part of that decision – it is already 45 minutes each way from Pymble by train four days a week.

Sathyan, 5, attends the local public school, and Shivan, 2, goes to childcare or is sometimes watched by grandparents. Thambipillay is happy with the school and believes the local public high school is good too. 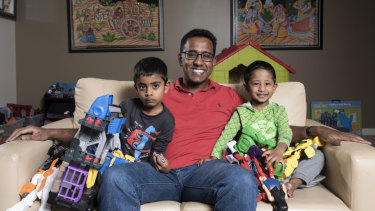 Niro Thambipillay and sons Sathyan, 5, and Shivan, 2, at their apartment in Pymble. Credit:Christopher Pearce

“The biggest challenge for men right now is the work-family conflict,” he says. “There’s longer hours at work, there’s longer commutes involved. They’re just not spending the time they want to with their kids.

“My role is to show them how to make the best of their limited time with their kids. After that, it’s seeing if they can make some geographical or career changes, but that’s not always feasible, especially in Sydney.”

Thambipillay says his wife would love to be a stay-at-home mother especially right now while the boys are young, but that was not financially possible for the family. Instead, she works part-time and Thambipillay has tailored his own work around the family’s needs.

In what he describes as “a balancing act”, a typical day in their household sees Thambipillay start work late, spending the morning with his sons before going to his office in nearby Gordon.

“There are some evenings that I don’t even get to see the boys, but that’s the trade-off.”

Moving from Camperdown to Hornsby when she was pregnant with her first child was a no-brainer for Kathy – but her husband needed persuading.

“I grew up here so I’d been lobbying for it,” she says. “I told him to eat out a lot on King Street, Newtown before we moved!”

The couple had been looking in the inner west but when Kathy, now 40, became pregnant, the bank reduced the pre-approval for the home loan. 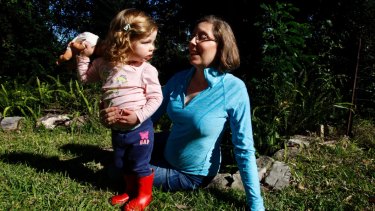 Kathy and her two-year-old daughter Emma at their home in Hornsby.Credit:Dean Sewell

Instead, the couple decided to buy a three-bedroom house in Hornsby with a view of the valley, a few streets back from bushland, and within striking distance of the train station.

Their daughter Emma is now two and the couple hopes to have more children.

Kathy loves having the bush close by, a backyard for the children to play in, and a safe suburb where the children can roam the neighbourhood when they are older.

“For me, I feel there’s [no trade-offs] because I’ve got family and friends up here; his family’s a bit further away and that’s a trade-off,” she says. “What I want to do is outdoor stuff anyway, I feel like I’m living in a big fun park up here, so much bushwalking and mountain biking. He was from Maroubra so needed convincing."

Kathy works as a solicitor near Central station and her husband commutes to Wynyard. “Hornsby is on the Newcastle train line so it’s only a 35 minute trip to the city [if you get the right train],” she says. “It would be a really different prospect if we were at one of the small stations, with fewer trains.”