It’s not perfect, but the nuclear submarine decision is worthwhile

If there was ever a doubt about which side Australia would take in the most consequential geopolitical tussle of our century, it was banished by the new AUKUS defence pact. In a modern-day equivalent of then-prime minister Harold Holt’s Vietnam War-era decree “All the way with LBJ”, Scott Morrison has tied Australia’s future to America’s ability to maintain “peace and stability” in the Indo-Pacific region. It’s a big roll of the dice.

In the most surprising result of the new pact, the US, with the help of Britain, has agreed to share highly sensitive nuclear submarine technology with Australia, the first time it has made such a deal in more than 60 years. This reflects the degree to which Washington now sees Australia and Britain as essential partners in challenging the rise of China in the region. 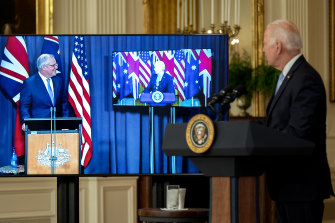 US President Joe Biden listens as Prime Minister Scott Morrison speaks via videoconference in the East Room of the White House.Credit:Bloomberg

Nuclear-powered submarines are faster and harder to detect. Because nuclear propulsion does not require air, they do not need to surface frequently, unlike conventional submarines. China has undergone a massive build-up of military capacity which includes more than 70 submarines, of which fewer than 10 are believed to be nuclear.

In signing up to such a substantial upgrade in its military capacity, Australia will no doubt be expected to play a greater role in standing up to China’s growing assertiveness. Last year’s Defence Strategic Update said the “prospect of high-intensity conflict in the Indo-Pacific, while still unlikely, is less remote than in the past”. Defence Minister Peter Dutton and his department head, Mike Pezzullo, memorably warned in recent times about the “drums of war”.

The announcement on Thursday morning is not the perfect solution to these threats. While the strategic update warned Australia no longer had a 10-year window to build its defences, scoping work for the eight new submarines is not expected to be completed for 18 months and any hopes of launching them before the late 2030s would seem ambitious. It will also be expensive to get out of our contract with French submarine maker Naval Group and costly to build the new fleet.

The Age is concerned by the lack of public debate. This is the most substantive change in decades to Australia’s military capability. It affects our trade and military relationships with other countries and will cost a king’s ransom, and yet neither the public nor our national Parliament was let in on the secret. As was noted by a senior US administration official before the announcement, “This is a fundamental decision – fundamental – that binds decisively Australia to the United States and Great Britain for generations.”

Many will express opposition, and their concerns are serious. Former prime minister Paul Keating argues Canberra’s closer ties to the US represent “a further dramatic loss of Australian sovereignty”. They will impede our ability to negotiate directly with China, and a stronger presence of America military hardware in the region will also make some of our neighbours, most notably Indonesia, nervous indeed.

But on balance, the decision to adopt this technology seems to The Age to be one worth making. America’s willingness to hand over its nuclear technology should equip us with a fleet of submarines that, in our remote part of the world, we can actually use.

The announcement comes as China has shown itself more than willing to throw its economic might around to punish nations such as Australia that are willing to stand up to it, and to turn a deaf ear to our complaints.

China has shown in Hong Kong its readiness to crush democratic institutions as a means of extending its authoritarian rule. Backed by its growing military, it has asserted its ownership of the South China Sea and makes no secret of its desire to eventually take over Taiwan.

If we in Australia believe we have a right to defend ourselves, we need to have the capacity to do so. The defence pact with Britain and America needed more discussion and certainly has its risks. It should not impede diplomatic efforts to ease tensions with China and it does not solve the foreign policy challenges of dealing with both China and the US. But it does make clear where Australia’s loyalties ultimately lie.