A growing family! Jhené Aiko’s father, Dr. Karamo Chilombo, welcomed his ninth child one month after the singer gave birth to her son.

“He is here,” the pediatrician, 78, shared via Instagram on Sunday, December 25, alongside a slideshow of photos depicting his newborn, Aiko’s half-sibling, accompanied by Bible verses. “JahSeh- Miyagi, 12/16/22.”

In another snap, Chilombo recalled meeting his baby boy for the first time. “THE FIRST MEETING OF FATHER AND SUN/SON ON THAT SPECIAL DAY AND HE WAS ALREADY VERY HUNGRY😋💙♐️,” he captioned the sweet picture.

In July, the Dr. Chill OG performer, who has eight other children, announced that he had another little one on the way with his partner when he posted a video of the gender reveal results. The “Wrap Me Up” singer, 34, shared her well-wishes with her dad at the time.

“Congratulations 💙,” Aiko commented on the clip. 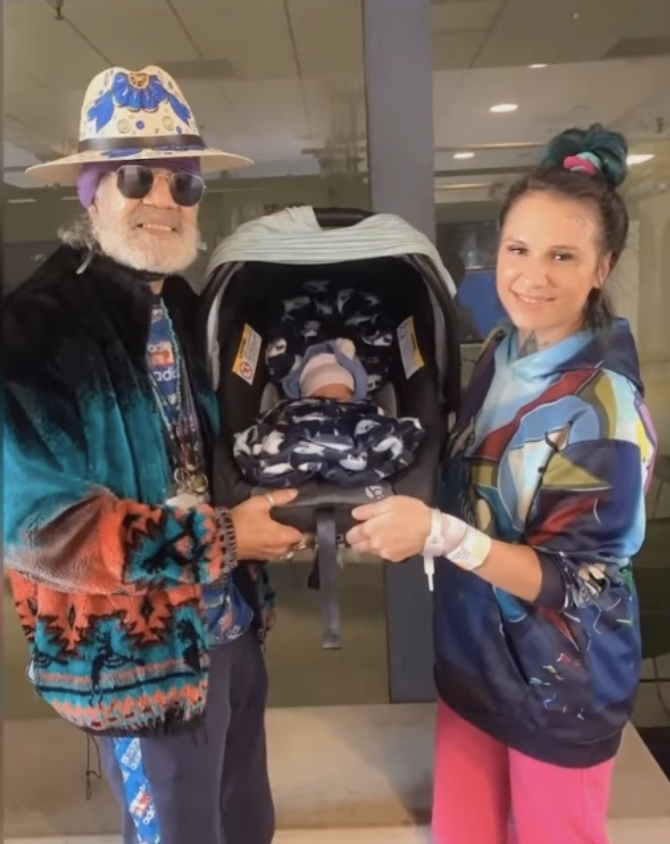 The Grammy nominated singer, whose mom is Christina Yamamoto, is the youngest of Yamamoto and Chilombo’s five children together. In addition to Aiko, her parents also raised son Jahi and daughters Jamila and Miyoko. Aiko’s other brother, Miyagi, died in 2012 after being diagnosed with a brain tumor. He was 26.

Celebrity Parents With the Biggest Broods

“After 24 hours of Labor, A Lunar Eclipse, with rain from the beginning of labor til he was born, he’s here safe and sound,” Sean, 34, announced via Instagram at the time of the arrival of the pair’s first child together. “Happy, Healthy and everything we could ever ask for and more.”

The couple have been together on and off since 2016, the year they released their joint album Twenty88. Though Aiko and Sean split two years later, they reconciled in early 2020.

“We’re just so close, I don’t know,” Aiko exclusively told Us Weekly about her relationship with the “Bounce Back” artist in 2019. “We’re definitely, we’re actually a lot alike. We’re a lot alike, so it is really easy for us to collaborate. … We’re constantly just feeding off each other, or, giving each other little ideas, little bars here and there, and like, ‘Oh, maybe you shouldn’t say that. Maybe you should say it a little more like this.’”

In 2016, “The Worst” artist opened up about her experience of being a mother to Namiko during an episode of Vice Autobiographies.

“In 2008, I got pregnant with my daughter. She made me feel fearless,” she shared at the time. “I never doubted that something good would come from it. If anything, it was inspiring and it just gave me this extra, extra drive.”