Vegan actor Joaquin Phoenix has revealed he was ‘full of fear’ when he made his lengthy pro-animal rights speech after winning best actor Oscar for Joker at the 2020 Academy Awards.

The Hollywood actor, 46, said he ‘wasn’t excited’ about the prospect of giving an acceptance speech after winning the Oscar for Best Actor for his performance as Arthur Fleck in the movie, Joker.

Phoenix, who is notorious for his environmental activism and is an outspoken advocate for veganism, used his speech time to make an impassioned plea for animal rights, which shocked audiences worldwide.

Speaking to the Sunday Times, Phoenix, who is now executive-producing Gunda, a black and white documentary about a sow and her piglets, said speaking publicly made him ‘full of fear.’ 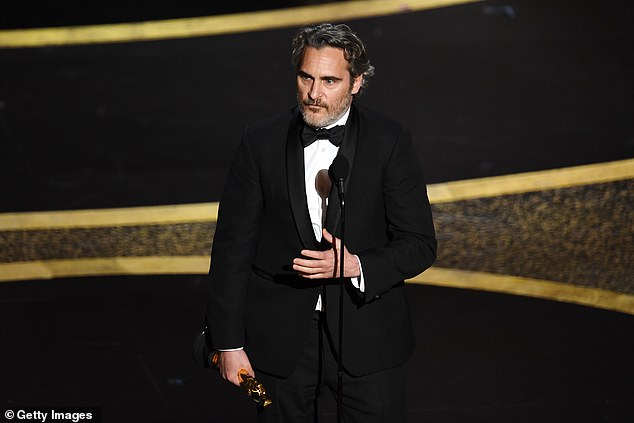 Hollywood actor Joaquin Phoenix, 46, said he wasn’t excited by the idea of making a speech following his win for the Academy Award for Best Actor in 2020, where he made an impassioned plea for animal rights, pictured 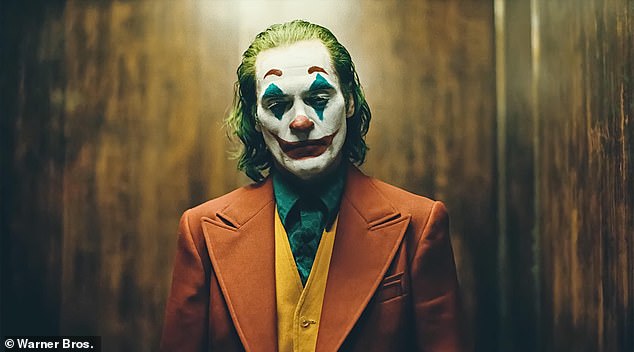 Phoenix won the Academy Award for his performance as Arthur Fleck in Joker, pictured

‘I did not want to get up anywhere and do anything. I was not excited about the opportunity,’ he said, reflecting on the moment.

‘It’s just not who I am. I was full of fear,’ he added, going on to say he felt like he had to use his speech to bring up the cause close to his heart. If I’m up here, I can’t just thank my mum.’

The A-list actor also went on to say that while he had turned to veganism from a young age, he wouldn’t force the diet on his children.

Phoenix explained that while he hoped his son River, named after his late brother who tragically died of an overdose aged 23, would be vegan, he wouldn’t pressure his beliefs onto his son – and would educate him on the reality of the food industry. 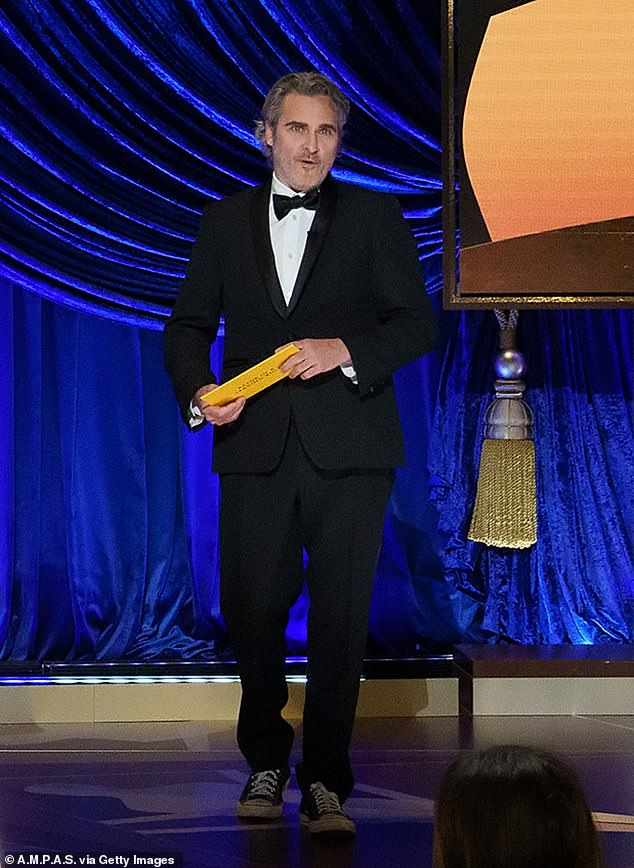 The actor, pictured at this year’s Academy Awards on April 25, said public speaking made him ‘full of fear’

‘I’m not going to indoctrinate him with the idea that McDonald’s have a Happy Meal because there’s nothing f****** happy about that meal,’ he said.

Phoenix, who was raised as a vegetarian since aged three, said he and his siblings decided to go vegan after seeing the brutal way in which fish were treated during a cargo ship trip from Miami to Venezuela.

Speaking to Collinder in 2018, the actor recalled the moment: ‘They were catching fish, and I guess to stun them they were throwing them against the side of the boat,’ he said.

‘I just had a profound strong reaction. It felt like a real injustice. It wasn’t just me, it was my siblings, all of my siblings, except for the youngest, Summer, she wasn’t born. 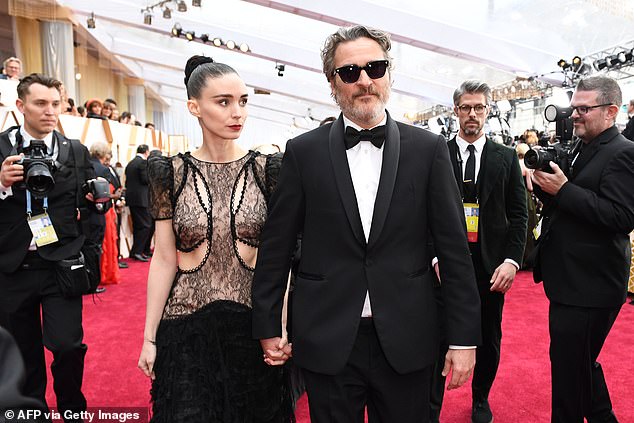 Phoenix, who shares a son with his fiancee Rooney Mara, said he wouldn’t force his vegan beliefs on his child, but would educate him on the realities of the animal product industry. Pictured: Rooney Mara and Joaquin Phoenix at the 2020 Oscars in Hollywood)

‘I think it made me distrustful, and angry, and frightened of humans, humanity. I just thought it was such a gross abuse of power in a way. I think that during that moment we knew that we were not going to eat meat anymore,’ he added.

In the speech, which was broadcast during the 92nd Academy Awards in 2020, Phoenix said: ‘I think we’ve become very disconnected from the natural world. Many of us are guilty of an egocentric world view, and we believe that we’re the centre of the universe.

‘We go into the natural world and we plunder it for its resources. We feel entitled to artificially inseminate a cow and steal her baby, even though her cries of anguish are unmistakeable. Then we take her milk that’s intended for her calf and we put it in our coffee and our cereal,’ he added.

His declarations drew criticism from the British National Farmers’ Union (NFU) president, Minette Batters, who said celebrity campaigners for veganism did ‘enormous damage’ to the UK’s meat producers and their wellbeing.

She said farmers feared a loss of livelihood and family holdings due to Phoenix’s speech.

‘Celebrities have to be careful [because] there are real-life consequences for others … Joaquin Phoenix, he’s had a really challenging life, and you really feel for him and a lot of the things he was saying, but he has to remember there are people at the end of this, there are small family farms and they get hurt too,’ Batters said.