Did you catch all that? John Cena took Super Bowl LV viewers on a watermelon fantasy in MTN DEW’s commercial, and this far-out trip could win you a million bucks!

John Cena  and Mountain Dew got weird during the brand’s Super Bowl LV commercial for its new Major Melon flavor. While the WWE Superstar and Fast 9 villain was in the driver’s seat of a pink Cadillac, suddenly, the world turned crazy. Like a weird trip straight out of the mind of Hunter S. Thompson, the world transformed into a watermelon extravaganza. However, this was all part of the plan. Whoever could tweet the exact number of bottles of MTN DEW Major Melon to @MountainDew would win a million bucks! (click the tweet below to see the full spot.)

We first learned about this contest in the teaser for MTN DEW’s Super Bowl commercial. “Hi, I’m John Cena, and I know how to count,” the 43-year-old says while rocking a Hawaiian shirt and pink shorts. “In fact, knowing how to count could change your life on Super Bowl Sunday – like, help you win one million dollars.”

How so, John Cena? “If you count all the bottles of delicious MTN DEW Major Melon, our new watermelon flavor, in our commercial,” says John, before taking a sip of the new soda. From there enters a CGI watermelon dog rocking some Major Melon bling (who debuted in an earlier teaser.) “You know how to count? I’ve seen it all,” it barks, leaving John perplexed…before going back to work. “Thirty-seven, thirty-eight…” 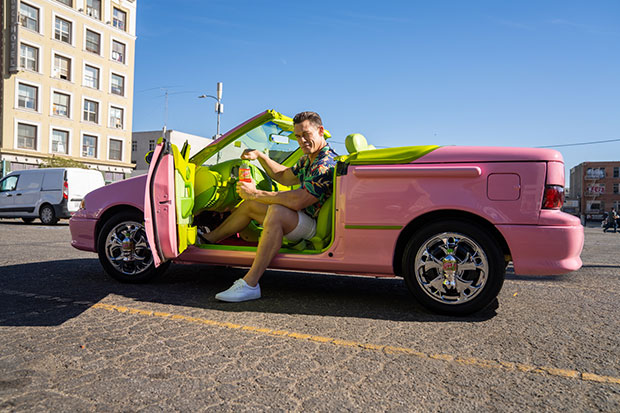 Despite this splash of weirdness, John was right: one eagle-eyed fan could end Super Bowl Sunday (Feb. 7) one million dollars richer. The commercial will air during the first half of the big game, and the first person to correctly count and Tweet (@MountainDew) the exact number of Mtn Dew Major Melon bottles in the ad could win one million dollars, according to a press release.

“This year, we’re bringing our newest flavor, Major Melon, to the Super Bowl, and we’re pushing creative boundaries in a way that puts fans at the core of the concept,” says Nicole Portwood, vice president, marketing, Mtn Dew, said in the release. “We’re excited about our partnership with the one-and-only John Cena to show the world how Mtn Dew Major Melon takes flavor to the extreme.” 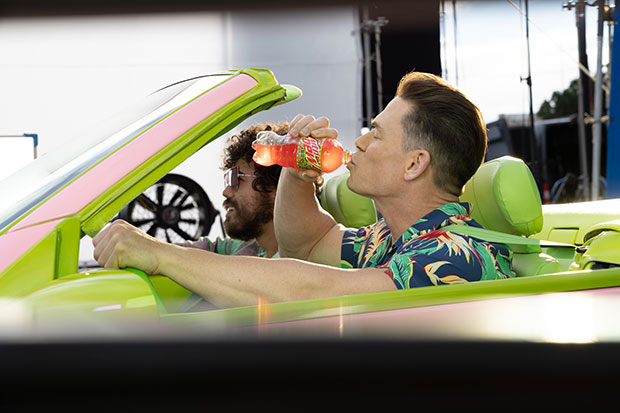 “I’ve been a DEW drinker for many years, so I was beyond excited to get the call to be a part of the Mtn Dew Major Melon Super Bowl commercial,” added John. “Commercials play an important role during the big game, and I have a feeling fans are going to go nuts for this one. The Mtn Dew Major Melon commercial is truly a life-changing opportunity for one lucky fan.” Fans can visit LifeChangingDew.com for the complete Official Rules.

MTN DEW Major Melon marks the soda’s “first permanent flavor offering in more than a decade,” per the Press Release. During the 2020 Super Bowl, the drink promoted its Zero Sugar line with the help of Tracee Ellis Ross and Bryan Cranston doing their best Wendy and Jack Torrence from The Shinning.