One of controversial union boss John Setka's closest allies has jettisoned his own positions to close in on the top job in the mega union representing 150,000 construction, forestry, maritime, mining and energy workers.

Militant Maritime Union of Australia president Christy Cain tendered his resignation from that role and as the union's West Australian state secretary in preparation for his planned ascension as national secretary of the CFMMEU at a meeting in December. 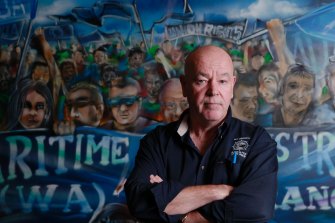 Maritime union boss Christy Cain has resigned from his internal roles to prepare to take up the national secretaryship of the broader CFMMEU.Credit:Philip Gostelow

Mr Cain's move solidifies control of one of what has been among the nation's largest and most powerful unions – even as its mining and manufacturing divisions appear likely to split off – in a faction with a record of firebrand unionism but poor ties to large sections of the Labor Party.

In an internal report to members obtained by this masthead, the maritime union said Mr Cain chose to step down, effective on 25 January, "to remove any further conflicts of interest that arose with [former national CFMMEU secretary] Michael O'Connor's resignation". 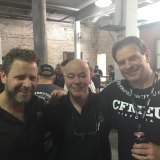 The former national secretary resigned in late 2020 ahead of a vote by unionists allied to Mr Setka, the Victorian construction secretary of the CFMMEU, to push him out amid a long-running internal conflict.

It was sparked by Mr Setka's belief others in the union had done too little to support him against calls for his resignation in the wake of a 2019 conviction for harassing his wife in a series of text messages.

One claim Mr Setka's backers levelled against Mr O'Connor, the brother of federal Labor frontbencher Brendan O'Connor, is that he had a conflict of interest by representing both the manufacturing division and running the national union, which the MUA's statement revives.

However, the union's rules state that only the boss of one of the divisions is eligible for the national secretary position, which could also cause legal problems for Mr Cain because he does not hold such a role. He declined to comment, as did Mr O'Connor.

The maritime union celebrated Mr Cain's likely transition into the national secretaryship in its member update, which could be enabled by a change to the union's rules.

"Comrade Chris Cain is now effectively the National Secretary Elect of the CFMMEU bringing to the job MUA values and the determination to make our broader union a fighting organisation that provides leadership to working people and the entire trade union movement," the union's message reads.

Mr Cain called on Labor leader Anthony Albanese to consider resigning in June 2019 after he moved to expel Mr Setka from the ALP for comments he made about anti-domestic violence campaigner Rosie Batty, which Mr Cain said were "misconstrued… false allegations". He is also in conflict with West Australian Labor Premier Mark McGowan over his plans to build a new, more automated port in the state.

In a Facebook post in December, Mr Cain said Mr Setka was one of the "most fair dinkum union people in this country".

A round of appointments within the maritime union were triggered by Mr Cain's move at its national, Sydney, West Australian and South Australian offices.