Kate has to follow weird rule to prove shes enjoying herself 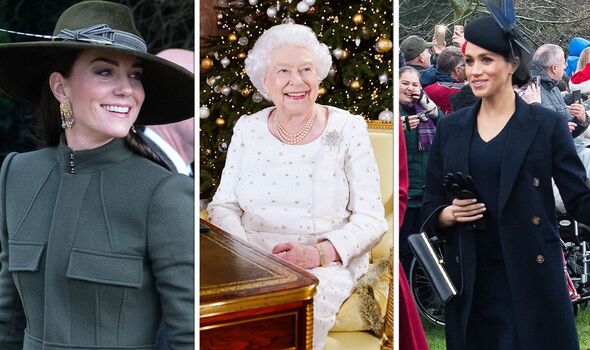 It is a tradition that the Royal Family spend Christmas Day at Sandringham and this year has been hosted by King Charles, for the first time. Royal and fashion expert Miranda Holder revealed four royal etiquette rules for Christmas dinner “that you didn’t know”.

Miranda explained that during the Christmas dinner at the Palace, “salt and pepper should be sprinkled over the plate and not on the food”. Most people sprinkle salt and pepper over their meals but according to the expert, the royal protocol dictates that this is not appropriate.

Drink glasses “should be held by the stem and not by the bowl” as many people do, and similarly, “no pinkies out” when drinking coffee or tea after a meal, she explained.

The expert said that when the monarch finishes his meal “and puts down his knife and fork, everybody should too”.

Miranda also shared “one of the most unusual” Christmas traditions the Royal Family follow as soon as they arrive at Sandringham, in Norfolk.

She explained: “We do love a bit of royal etiquette and eccentricity, particularly around Christmas time, but they have one royal Christmas tradition that is a bit unusual. They weigh their guests. Yes, you heard that correctly.

“This tradition dates back to King Edward VII who thought it would be amusing to weigh his guests at the beginning and then at the very end of their Christmas stay to see just how much they had enjoyed themselves.

“Food features heavily in the Christmas schedule so the Queen thought it would be amusing to carry this Christmas tradition on. Apparently, if you’ve put on 1.4kg (three pounds) you’ve had a really good time,” the royal expert said.

Meghan and Harry only spent two Christmas with the rest of the Royal Family. In 2017, the Duchess of Sussex travelled to Sandringham with Prince Harry for the first time and shared her experience on their Netflix documentary.

She explained: “I remember so vividly the first Christmas at Sandringham. Calling my mom, and she’s like, ‘How’s it going?’ and I said, ‘Oh my gosh, it’s amazing. It’s just like a big family like I always wanted’.

“There was just this constant movement and energy and fun. At dinner, I was sat next to H’s grandfather [Prince Philip] and I just thought it was so wonderful.

“[Harry] was like, ‘You had this bad ear. He couldn’t hear anything you were saying’. I was like, ‘Oh, well I thought it went really well’.”

Following their wedding in 2018, Harry and Meghan also spent Christmas at Sandringham but in 2019, the couple decided to spend their first holiday as a family of three in Canada.

Royal watchers took to social media to share their thoughts and many were surprised and did not know about the bizarre rules the royals have to follow.

Social media user @beautifuleveryday_uk said: “These are so interesting, even weird, like the salt and pepper, but holding a glass by the stem applies to everyone, no?”

Another one, @_stef_withanf_, commented: “I hope King Charles eats slowly to give everyone else a chance to eat what they want.”

Social media user @oldfashionguru agreed saying: “I guess you need to eat fast if you’re dining with the King!”

@nickys_universal_style added: “All of them (surprisingly!) I’m just waiting on my invite to join them!”

Another one, @yourpreloved_stories, added: “How strange is this tradition!”