Labor and the Greens will hold a dominant progressive voting block in the new Senate as part of a major realignment of the upper house that could see former Wallaby and climate change activist David Pocock occupy a powerful position.

One Nation leader Pauline Hanson is ahead in a battle to hold on to her Queensland seat, after a surprising challenge for the sixth spot from Legalise Cannabis Australia’s Bernard Bradley, whose party is also in the hunt for the final Victorian Senate seat along with Clive Palmer’s United Australia Party. 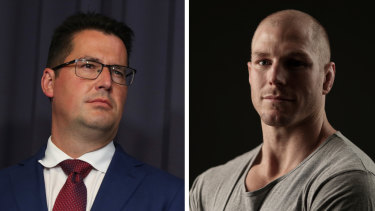 The Greens are set to secure12 seats in the new upper house, up from 9 in the previous parliament, as part of an expanded crossbench of at least 17 members that will include Tasmanian independent Jacqui Lambie’s candidate Tammy Tyrrell.

But the final Senate makeup will take weeks to be formally declared with messy preference flows to determine a number of seats in several states.

Psephologist Dr Kevin Bonham said the early results pointed to a workable Senate for Labor, with the gain of a third seat in WA and the expected triumph of Pocock in the ACT diluting the conservative ranks in the upper house.

“It looks like they will be able to pass things with the support of the Greens and possibly one other, such as Pocock or the Jacqui Lambie network,” he said.

“The potential is that Pocock is the vote that Labor and the Greens need to get things over the line. If that happens, he’s free to take an independent powerful position.”

Pocock, who is poised to pull off an historic upset and end the major party duopoly in the ACT by ousting Liberal Minister for the Pacific Zed Seselja, refrained from claiming victory on Sunday.

“We’ll just have to wait and see, there’s a fair bit of counting to go,” Pocock said. “This campaign has shaken up politics in the ACT…We don’t want to be taken for granted.”

Ben Oquist, a former political adviser and executive director of the Australia Institute, said the headline takeaway of the Senate count so far was that it had delivered a “climate majority” with Labor, the Greens, and Pocock.

On current results, Labor will retain 26 seats in the upper house, which when combined with the Greens will give them a blocking majority of 38 in the 76-seat Senate.

Labor still has an outside chance of picking up a third seat in Victoria, as it battled it out with the micro-parties for the sixth spot, which would give it a working majority in concert with the Greens.

In the last parliament, the Coalition was frequently forced to rely on One Nation’s two votes and a third crossbencher to pass contentious legislation.

Greens leader Adam Bandt was triumphant on Sunday, declaring the party would be the “biggest third party in the Senate”, with former NSW MLC David Shoebridge set to be vaulted into the upper house alongside newcomers Barbara Pocock in South Australia, and Penny Allman-Payne in Queensland.

“The Greens will be in balance of power in the Senate and potentially in the lower house as well,” he said.

Labor senator Tony Sheldon said the party would work with all crossbenchers.

“Whether the crossbenchers are made up of 17 or 18, which at this early stage appears where it’s heading, good government reaches out to all crossbenchers, consults, discusses,”