RBA governor Philip Lowe doesn’t come across as a gunslinger.

But on Wednesday, he stared down those financial market analysts and economists who reckon the bank is about to blink on its plan to keep official interest rates at record lows for years to come. 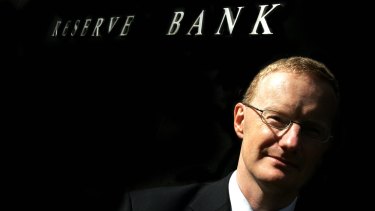 Not only did he stare them down, he shot down their arguments with pinpoint accuracy. The only thing missing was a score from Ennio Morricone.

Markets have pushed up the interest rates on government debt over recent weeks, anticipating an outbreak of inflation. Given the RBA’s job is to keep inflation between 2 and 3 per cent, the same markets have started to believe the bank could lift interest rates as early as next year.

That would be in stark contrast to the bank’s stated position of record low rates out to 2024.

So Lowe, wearing a dark navy suit rather than a poncho and a holster belt, told a meeting of business leaders that the RBA was not for turning.

The reason is clear – wage growth, or rather, the lack of it.

In the bank’s opinion, inflation won’t be anywhere near the RBA’s inflation target until wages are growing at a healthy clip. In its mind, that means wages growth above 3 per cent.

Currently, they are at a record low of 1.4 per cent.

Lowe and the RBA were cutting interest rates in 2019, before the pandemic, to get wages growth up. At that point they were around 2.2 per cent.

“Even before the pandemic, wages were increasing at a rate that was not consistent with the inflation target being achieved. Then the pandemic resulted in a further step-down. This step-down means that we are a long way from a world in which wages growth is running at 3 per cent plus,” he said.

To get wages growth to this level, the bank believes it has to drive the jobless rate down to around 4 per cent. The under-employment rate also has to fall substantially.

Again, the bank’s experience pre-pandemic is colouring Lowe’s forecasts. Even though pre-pandemic the jobless rate was down to 5.1 per cent, workforce participation was climbing. This kept a lid on wages growth – and inflation.

For those fretting about low interest rates and house prices, he highlighted the other weapon in the bank’s armoury.

Macro-prudential regulations, such as bank lending standards, could be deployed quickly if the bank believed the market was getting out of hand.

Nothing, he made clear, is going to get in the way of the bank’s plans to get wages growing.

This country won’t see higher interest rates until Lowe and the RBA sees a fistful of dollars in the hands of all Australian workers.