A determined husband was forced to ask a group of firefighters for help after he lost his wedding ring down a London drain – before delving into 30 handfuls of sewage sludge to get it back.

Australian Eammon Ashton-Atkinson, 32, who is a TV reporter for Network 10’s 10 News First, and based in Streatham, London, was eating dinner with a friend in Clapham when he lost his wedding ring.

Eammon, who married software engineer John Ashton, 28, in May 2018, tried to fish it out with a crowbar, before appealing to the local council who said they couldn’t send someone until the next day.

However, fearing his ring would soon disappear for good, Eammon refused to give up and travelled to the local fire station, where he asked the firefighters if they would help. ‘And what do you know, they said they would help,’ the reporter recalled.

Finally, he retrieved the ring to cheers from the whole restaurant. 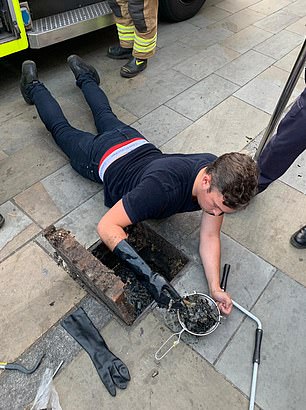 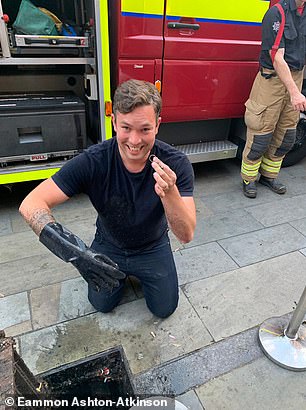 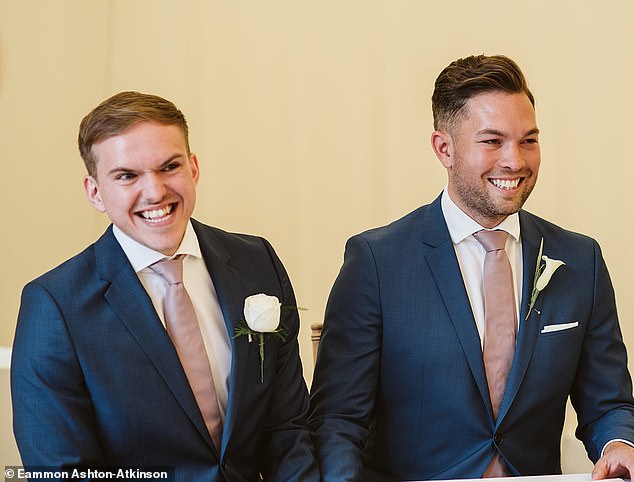 Eammon, from Brisbane, Australia, married software engineer John Ashton (pictured together at their wedding), 28, in May 2018

Recalling his eventful evening, Eammon said: ‘I took off my wedding ring to play with it, which is a bad habit.

‘My husband John is always telling me not to do it because I’ll lose it one day. And then it fell off the table, and straight into a drain.

‘At first I thought it was sitting on top of the sludge, but then when we tried to fish it out with a hook, I realised there was water underneath and it would have fallen straight to the bottom.

‘Luckily there was no rain, so I ran to the hardware store to buy some crowbars to try to open the cover. It wouldn’t come off.’ 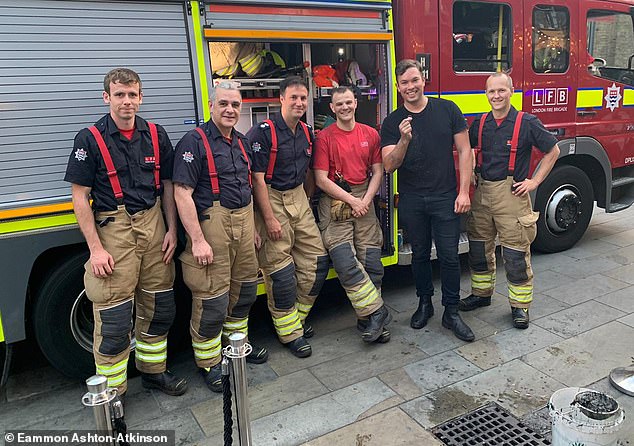 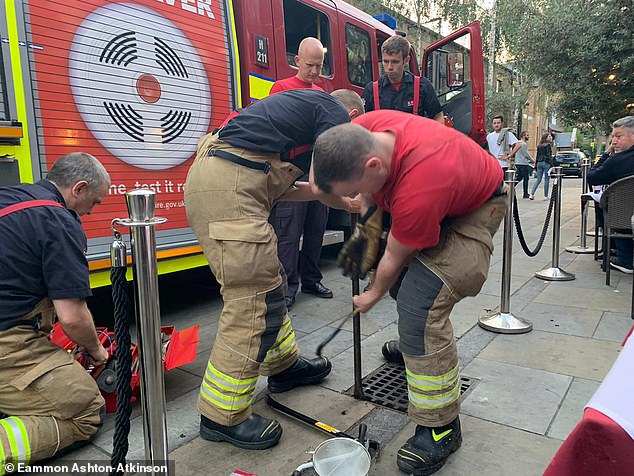 But Eammon was determined and headed towards the local fire brigade.

‘I thought there was no harm me dropping by in person to ask,’ he said. ‘They couldn’t take the truck offline, but they would swing by after their next job.

As promised they soon turned up outside Argan Restaurant and liftied the lid off the drain.

‘So down comes the firetruck and parks up right next to our table. There was a crowd of people building. They manage to pop off the lid and give me a glove. 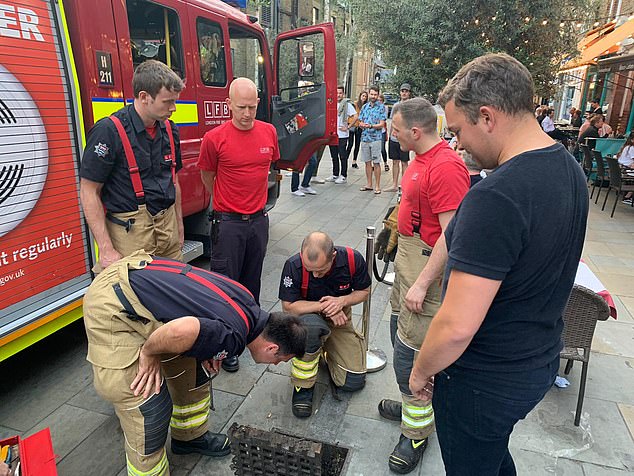 The crew said they would stop by after their next job, and as promised they were soon turning up outside Argan Restaurant and lifting the lid off the drain

As a steady crowd of onlookers built, Eammon had to start trawling through the sewage.

‘I started to scoop through Clapham’s finest sludge. It was disgusting,’ the Brisbane-native explained. ‘The smell was awful. I felt bad for the people near us trying to eat their dinner.

‘After about 30 handfuls, finally I saw a tinge of gold. I found it! The whole restaurant was cheering.

‘It was all over my shirt so I had to hail a cab home shirtless. My arm was tingling from the sludge, so I used every household cleaning product we have to get it off.’ 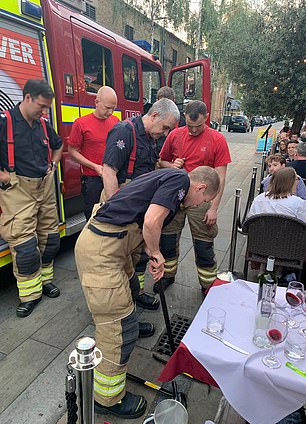 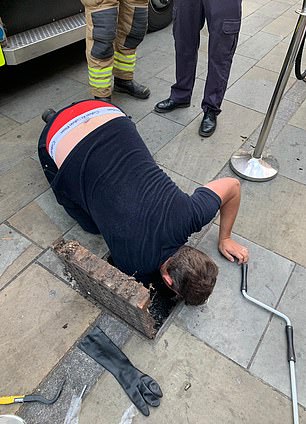 Digging in deep! The firefighters opening the drain (pictured left) and Eammon reaching down to find his ring (right)

‘I was so grateful to the firefighters. There was no way I was going back home without my wedding ring.

‘We’re going to be celebrating Pride this weekend – it would have been dreadful if I had lost my ring.’

Eammon’s husband was understanding about the ordeal, often used to his partner’s manic’ life as a breaking news reporter travelling around Europe.

John, from Bolton, simply said: ‘What have I married?’ 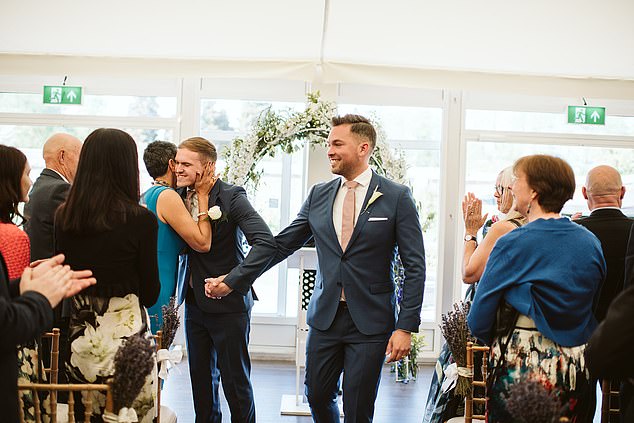 Eammon’s husband was understanding about the ordeal, often used to his partner’s manic’ life as a breaking news reporter travelling around Europe. The couple pictured together at their wedding 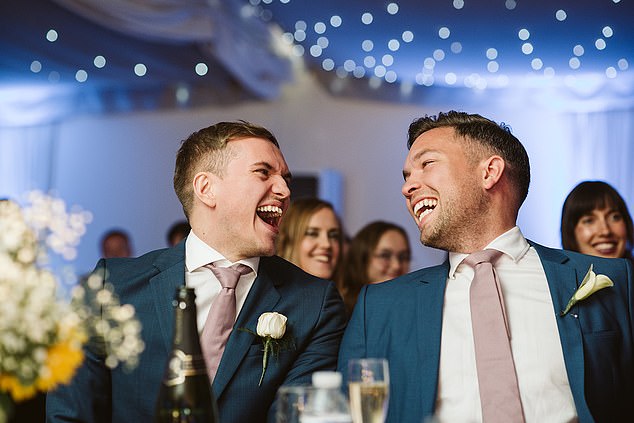 ‘We’re going to be celebrating Pride this weekend – it would have been dreadful if I had lost my ring,’ Eammon (pictured with his husband) said