Husband is torn over whether he should forgive his wife after she confessed to cheating on him five years ago with a married man – so, what would YOU do?

A man has been urged to leave his wife after she confessed to cheating on him five years ago with a man who previously rejected her.

Posting on Reddit, the anonymous man, believed to be from Kentucky,  explained that he and his wife had a long distance relationship for awhile but had agreed to date each other exclusively long before getting married last October.

He said he wasn’t aware of any infidelity, until his wife confessed to having had a virtual affair  with a married man who had turned her down before they met.

His wife admitted to having sexual video calls and sending nude photos to another man.

The heartbroken man added that he’s experiencing a ‘whirlwind of emotions’ and has told his wife to block the individual on social media – but responses have argued it’s not enough for her to cut contact and it might not be possible to repair the broken trust. 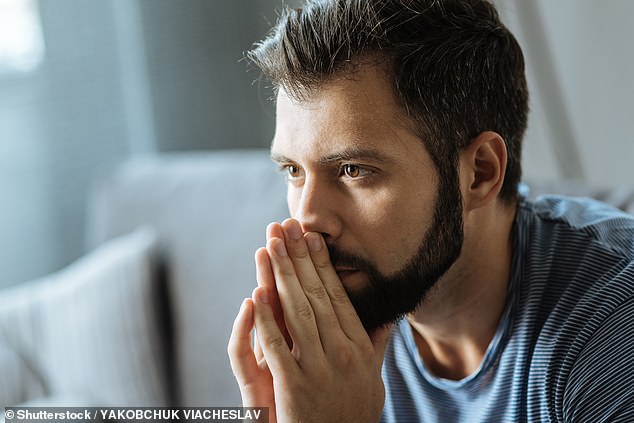 An anonymous man has been urged to leave his wife, after learning that she had an affair five years ago (file image)

Feeling lost, the man penned a lengthy post detailing how his relationship had bought him happiness and stability until his wife revealed her bombshell.

He wrote: ‘My wife and I met back in 2015, and we had a good friendship for a while. Later on, we talked but it was long distance for a while. It was during this time that we made our relationship official.

‘At that time, I was doing an internship for a major company the may or may not rhyme with bisney. I got free tickets to the theme park, which I offered to her and she flew all the way to see me. This was when we made it official.

‘I came back after the internship, and while we were still long distance we were close enough that we got together on weekends.

‘We have since built a life together. She saved me from an abusive household. We moved in together, struggled financially together, found what work we could, got married in October, and built a happy life for ourselves together.’

The man told how unexpected the affair had been, saying: ‘She just got a new job as a professor in another city so we’re looking for apartments, and she told me that she wanted to tell me something. She shared that, shortly after I came back from the internship, one night she had night video sex with someone she gave unreciprocated love to.

‘This rejection was before we knew each other, but the video sex was after we were official. She also said that they shared explicit pictures, something that she took an absolute hard-line no stance on with me until after we were married.

‘She told me about this guy before, and how she was rejected by him when she was in undergrad. He rejected her, and then he dated and ultimately married another girl that he was married to WHEN THIS TOOK PLACE. The rejection took place before I met her, but this instance was after. 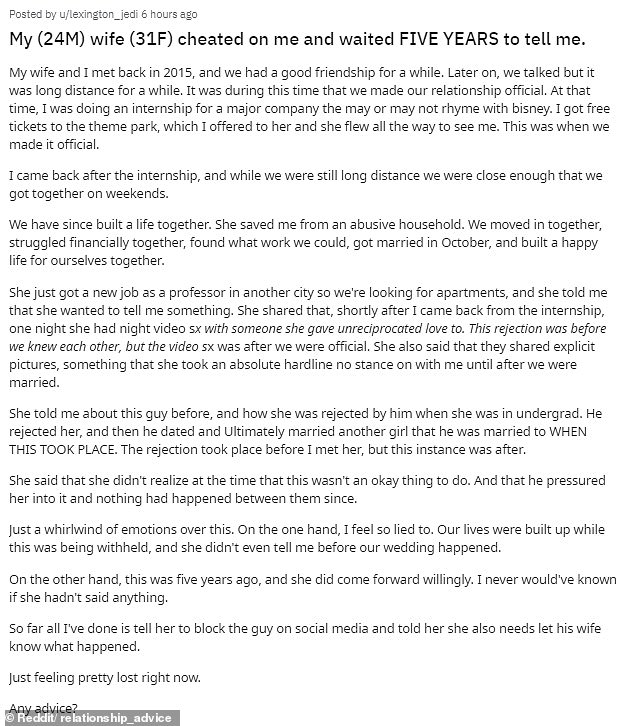 Posting on Reddit, the man said his wife confessed to having video sex and sending nude photographs to another man

‘She said that she didn’t realize at the time that this wasn’t an okay thing to do. And that he pressured her into it and nothing had happened between them since.

‘Just a whirlwind of emotions over this. On the one hand, I feel so lied to. Our lives were built up while this was being withheld, and she didn’t even tell me before our wedding happened.

‘On the other hand, this was five years ago, and she did come forward willingly. I never would’ve known if she hadn’t said anything. So far all I’ve done is tell her to block the guy on social media and told her she also needs let his wife know what happened.

A flood of responses dubbed the wife ‘selfish’ and urged him to leave, while questioning her motivation for suddenly confessing.

One person wrote: ‘I’d leave her if I was in your place. Cheating is such a gross thing to do to someone you supposedly care about. The fact she waited five years makes it worse.

‘Unforgivable either way, but I’d at least have some respect for her if she came clean after it happened. But after five years, just seems like she’s only apologising because she feels guilty about it, not because she’s apologetic.’

A flood of responses argued the man should leave his wife, while accusing her of only confessing because she feels guilty

Another said: ‘So she came forward five years later? Why? To make herself feel better? She’s selfish. It’s more than cheating. She didn’t even apologise. She made an excuse that she didn’t know it was wrong. I would separate if my spouse did this to me.’

Others argued the wife is likely not telling the full story about the affair, with one writing: ‘You’re going to find more out, do you really think a married person would risk their relationship just for like one hour of video sex. Come on, they had sex.’

‘I don’t know, the big question in my mind now is if she knows it’s wrong (not at that time) why didn’t she cut him off all this while (five years)? There must be some contact at least I suppose? When did it happen after you two were official! Only thing I can think of is she’s trying to get back with him but failed! Afraid there must be more to it just my take! Take care,’ another wrote.

A third added: ‘It’s been five years for her, not for you. You’re feelings of betrayal and anger and your loss of trust in her are valid. You’re beginning to understand that the relationship you thought you had doesn’t really exist.

‘It’s never really exited because it’s all been built on deception. Take as much time as you need to work through our emotions and make the best decisions for you.’