The mining union’s attempt to exit the CFMMEU, once hailed as the most powerful force in Australia’s labour movement, has been blocked by Australia’s national industrial tribunal, forcing it to remain within the bitterly divided organisation as it plots another way out.

Three Fair Work Commissioners decided on Tuesday the Mining and Energy Division of the Construction, Forestry, Maritime, Mining and Energy Union did not meet the legal threshold for its members to vote on whether they wanted to withdraw from the larger union. 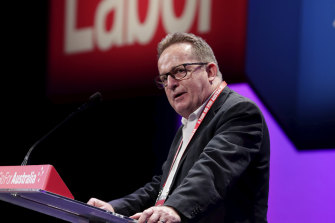 Mining union boss Tony Maher has vowed to press on with his division’s attempt to leave the CFMMEU.Credit:Alex Ellinghausen

It leaves the union with two obvious choices if, as the miners have vowed, they still want to leave: ask the courts to review Tuesday’s decision or use laws introduced by the Coalition last year that provide an alternative route for divisions of lawbreaking unions to split.

That path poses other challenges, such as requiring the mining union to show it was not involved in the CFMMEU’s long history of industrial law breaches. It could also have implications for which members remain with the mining and energy division, and which remain with the CFMMEU.

The conflict within the CFMMEU dates from 2019 when its powerful Victorian construction division secretary, John Setka, was accused of harassing his wife via texts. Mr Setka pleaded guilty to one criminal offence of using a carriage service to harass, and another of persistently breaching a court order.

Mr Setka took the view that others had been insufficiently supportive of him, setting off a cascade of conflict that left the mining division wanting to withdraw and the manufacturing division likely to follow.

But the 20,000-member mining division’s plan failed as it didn’t satisfy the Fair Work Commission it was created within five years of its application to split.

Mining division president Tony Maher said the decision was a disappointing setback but vowed to keep pursuing a vote to leave the CFMMEU, from which the mining division is already operating autonomously.

“Members around the country have indicated their strong support for moving forward as an independent Mining and Energy Union,” Mr Maher said. ”We are committed to giving all members a vote on this issue.“

The CFMMEU’s national construction secretary, Dave Noonan, called on the mining and energy division to accept the commission’s decision and resolve disputes within the union, rather than through the process created by the Coalition.

“They are not the friends of workers, as their drive to casualise our industries shows,” Mr Noonan said. “We all need to focus on the issues confronting members: job security, safety, wages and conditions. This can best be achieved by a union of 100,000 plus members, not by splitting our strength.”

Attorney-General Michaelia Cash said the case showed the divisions within the CFMMEU and noted the mining division could still withdraw using the new method.

“It’s not surprising that parts of the CFMMEU want to disassociate themselves from the persistent lawlessness promoted by many individuals within that union,” Senator Cash said.

On Tuesday Mr Setka defended himself against another allegation from his now-estranged wife, Emma Walters, that he had assaulted her last month by hitting her head against a table five times following an argument.

On ABC Radio in Melbourne Mr Setka described the allegations as “false”.

“I have not been charged …over the years there has been many, many allegations made against me which always amount to nothing, that’s about all I can say,” he said.

“I walk around, I hold my head up high, I’ve got nothing to be ashamed of, I’ve done nothing wrong.”