People who bought property during the coronavirus pandemic on fixed-rate loans face a financial cliff next year when their terms expire, with experts predicting their repayments could jump by around $900 a month, adding pressure to household budgets.

Many borrowers were able to secure fixed mortgage rates below 2 per cent in the first year of the pandemic, as the Reserve Bank slashed the official cash rate to a record-low 0.1 per cent in November 2020. 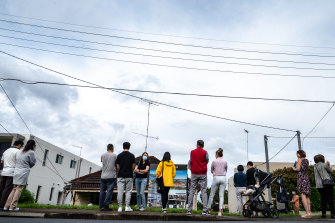 People who bought during the pandemic with large loans will face the biggest financial shock as interest rates rise.Credit:Flavio Brancaleone

Those favourable interest-rate conditions drove fixed-rate mortgages as a proportion of new lending to a peak of 46 per cent in July 2020.

RateCity research director Sally Tindall said the Big Four banks had made it clear in their half-yearly reports that a sizeable number of households would come off those fixed terms between July and December next year.

RateCity research found $131 billion of fixed-rate mortgage terms from Commonwealth Bank, Westpac and National Australia Bank would end in the latter half of 2023. CBA has $53 billion of fixed loans ending between July and December, Westpac has $48 billion expiring in the same period, and NAB’s $30 billion of fixed terms will peak between April and September.

“Our estimate is that 38 per cent of people are currently on a fixed rate,” Tindall said.

If someone with a $500,000 loan, paying principal and interest, took out a fixed-rate mortgage in July 2020 for 1.94 per cent (the average of the Big Four banks’ fixed rates at the time), they would currently be paying $2105 in monthly repayments.

When their fixed rate ends in July 2023, RateCity calculated they would be faced with an average “revert” rate of 5.68 per cent, based on Westpac’s forecasts for the official cash rate, which would see repayments rise by $937 a month. Even on the lowest estimated variable rate of 4.42 per cent, monthly repayments would lift by $600.

Westpac predicts the cash rate, currently at 0.85 per cent, will peak at 2.35 per cent by February, while financial markets are tipping it could reach 3 per cent by the end of the year.

Grattan Institute economic policy program director Brendan Coates said people who had only recently bought property would rapidly rein in their spending when faced with higher interest rates, whether they are on variable or fixed-rate mortgages. Part of the reason for that was because the size of loans relative to incomes had risen dramatically over the past 30 years.

“Buying a house in the early 1990s would certainly cost you say, three times the average income. And now it costs you something more like eight times, and that just by its nature means that people are borrowing a lot more,” Coates said. “Therefore it doesn’t take anywhere near as big an increase in interest rates on that much larger loan, for the mortgage to account for a large share of borrower’s incomes.”

But Coates added the people who bought during the pandemic were a minority of mortgage holders.

“COVID has been a very different experience for these two different sets of borrowers,” he said. “If you bought a while ago, you’ve spent the last three years with interest rates below where you bought, just paying down a heap of the mortgage.”

Following the Reserve Bank’s largest one-off interest rate rise in 22 years this week, CBA economists forecast property values could fall by nearly 20 per cent through to the end of next year, which would take the market back nearer to pre-pandemic values.

“So this is the main channel through which you might actually reduce household spending because they feel poor because their house has gone down in value,” he said.

While those with variable home loans would also experience rate rises, Tindall said their increase in mortgage costs would be more gradual. Her concern is whether people were prepared for a rate hike shock.

“Sit down and work out what your interest rate is likely to be, but also what your monthly repayment will be,” she said. “If it doesn’t fit in with your current budget, start making changes to that budget now, so that you can be prepared.”

Cut through the noise of federal politics with news, views and expert analysis from Jacqueline Maley. Subscribers can sign up to our weekly Inside Politics newsletter here.