Mother, 33, who left school with no qualifications and was branded a ‘wannabe’ by male investors now runs her own digital beauty salon app with an annual turnover of £100,000

A mother who was branded a ‘wannabe’ by a ‘cruel’ male investor has revealed how she made over £100,000 in a year despite giving away services for free during the pandemic.

After being expelled from school with no qualifications, Jody Riley, 33, from Liverpool, went from job to job before she started working in the beauty industry while pregnant with her first child.

After spending years building up her skills, she launched PamperBook – an app which offers beauty salon owners and freelancers a digital diary and appointments booking system – in late 2019.

The entrepreneur has since gained over 40,000 customers and had 150,000 appointments booked through her service – making a profit this year despite giving services away for free during the pandemic.

But it hasn’t been plain sailing all the way, and speaking to FEMAIL, Jody revealed how she battled with snobbery from investors and web designers who dismissed her as a young woman ‘who hasn’t got a clue’. 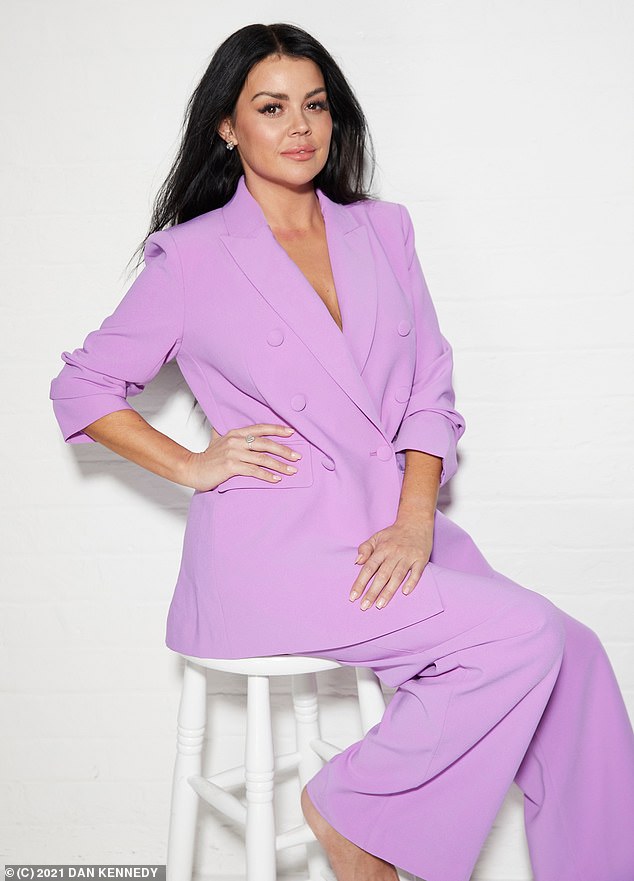 Jody Riley, 33, from Liverpool, made over £100,000 in a year despite giving away services for free during the pandemic after launching a digital beauty appointment booking platform in 2019

‘I’ve had it along the way with a lot of people,’ she said. ‘They thought I wasn’t much to scale up to, you know, a young girl who thinks she can build this big business.

Mother-of-two Jody, who lives in Aintree with her two sons, has always had a good work ethic, going to car boot sales, doing a paper round and working in local charity shops from the age of nine.

‘I don’t know why,’ she said. ‘It’s mad because looking back, it wasn’t the money that was bothering me. It’s just that selling and being there and working. I remember leaving the money in the tin and just walking away from it.’

Mother-of-two Jody, who lives in Aintree with her two sons, has always had a good work ethic, going to car boot sales, doing a paper round and working in local charity shops from the age of nine

But at school Jody struggled to focus on her studies and when she was expelled after a ‘rough patch’, she left without receiving any of her qualifications.

‘In school it sounds bad but I just wasn’t willing to learn and I went through a bit of a rough patch and I got expelled unfortunately,’ she said. ‘I didn’t do GCSEs, left school. I look back and cringe, don’t get me wrong.

The ‘virtual PA’ created for beauticians: What is PamperBook? 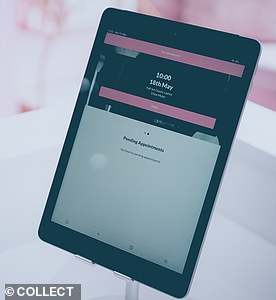 PamperBook acts as a ‘virtual PA’ for freelancers or salon owners

PamperBook allows customers to check date availability and book hair appointments and beauty treatments directly with the salon or freelancer.

It takes away the need for a dedicated receptionist and staff costs, thus saving money and increasing bookings by an average of 25 per cent.

The app ensures customers can book appointments at any time of day or night, with more than 50 per cent of bookings made out of salon hours.

The app is Mac/PC/Smartphone and smart device-friendly.

It features diary reminders and push notifications for salon owners and customers.

Customers can pay for their treatments through the unique PamperPay payment service to secure their appointments.

After leaving school Jody went from ‘job to job’ which she says was a ‘nightmare, because I always wanted to do my own thing’, before falling pregnant with her first child.

‘I did a load of beauty courses and that’s when I started a beauty career really,’ she said. ‘I was going around mobile while I was pregnant and doing nails and makeup.’

By the age of 24, Jody had opened the first of three salons through sheer ‘determination and hard work’.

‘I was going around eight months pregnant doing people’s nails and makeup,’ she said.

‘It was scary but I just kind of I threw myself in the deep end with every thing and I kind of believed it was going work before it did. So it just kind of came naturally to me.’

It was during a trip to the Lake District in 2015 she came up with the idea for PamperBook, when she was struggling to find a hair appointment after a visit to the spa’s swimming pool.

Two years later, when Jody was 29, she ‘threw herself in the deep end’ and started work on developing the app, which at this point was called Just Bella, by reaching out to local web developers.

She says that finding a web developer was the hardest challenge of all, claiming that those she worked with struggled to accept her knowledge and vision from the beauty industry.

‘I have a love/hate relationships with them,’ she said ‘They’re just so hard to work with the one I’ve got now honestly, he’s just a godsend.’

Her next challenge was finding investors, revealing that one financier who harshly turned her down has since tried to reach out to her on social media following her success.

‘I remember an investor saying ‘”Join the line. Join the line of all the other wannabes,” she recalled.

‘That was probably one of my biggest pushes where I was like, “I’m going to show you” and thankfully I have and he’s even gone and followed me on LinkedIn.’

‘People can be cruel, I don’t want to be sexist, but especially men can be so cruel. I’m a young female. Sometimes they think “She hasn’t got a clue”.’

To date, Jody has over £500,000 invested in PamperBook and says that when she finally found an investor, while they loved the product, it was her attitude that convinced them.

After a soft launch, the business was in full swing and Jody says it was ‘mind blowing’ to see the initial success of her platform.

‘I’ve come from travelling around in my little car and you know, not being able to afford petrol some days, doing £10 nails, to “Wow I’ve got £200,000 in the bank for a  business that was literally just a thought”.’

But when the pandemic struck, Jody decided she wouldn’t charge her users for services and instead used the time to ‘really strengthen the product’. 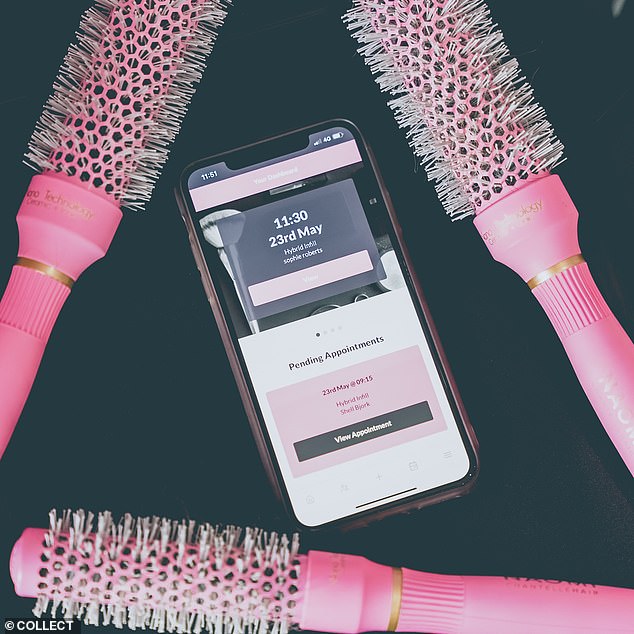 After a soft launch, the business was in full swing and Jody says it was ‘mind blowing’ to see the initial success of her product. Pictured, the PamperBook app on a mobile phone 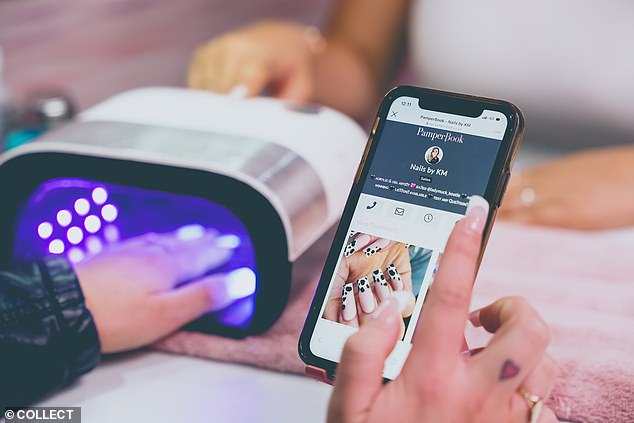 Jody says what sets the app apart from her competition is that PamperBook is a female-led business ‘built by a beautician for beauticians’. Pictured, the PamperBook app on a mobile phone

‘We became more of a support system and we flipped everything and just started sending a welcome packs, how to deal with COVID pressure, and we were just really there by the side of our users, we created support groups and we’d give everything away for free basically,’ she explained.

‘Thankfully, we had the investment in the bank, it just give us that time to really get to know our users and strengthen the product and just be really reputable.

‘So being more than just a booking system, but like a support system where we can really say that we are reputable. Our account services are always on the other end of the phone.’

Jody says it was difficult homeschooling her two children while living with her mother, who was working night shifts as a nurse, and that some nights she would be up until 1am working on the app while her kids slept.

She says what sets the app apart from her competition is that PamperBook is a female-led business ‘built by a beautician for beauticians’.

‘I’ve been there, done that, worn the T-shirt, I know what they want. It’s super slick, easy to use, and it’s very feminine, which sets us aside. The others are really black and white, corporate men who have not got a clue about the beauty industry have put these ideas together. 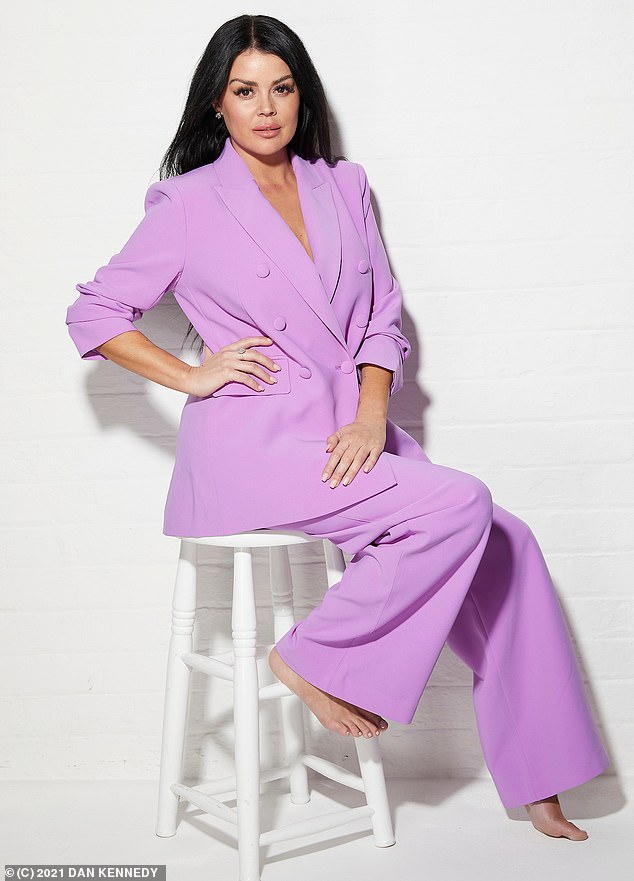 ‘So I think a really does set us aside because it is just super easy to use and you know, really cost effective and just the people behind the brand really makes us a lot more impressionable and attractable.’

From June 2020-21, Jody turned over more than £100,000 and after another £200,000 investment, PamperBook is planning to expand to locations outside of the UK – with the team ‘constantly’ adding new features to the app.

Jody says that her business advice would be to ‘set aside ego’, insisting that her main goal is to help young women who find themselves in the same situation as she did after leaving school.

‘There was no guidance for me’, she said. ‘I didn’t know what I was doing. If I can pick them all up at that time and I can give my experience and help, that would be amazing.

‘Because you know, these young girls do leave school. Unfortunately, you don’t know what type of life they’ve had. That’s my end goal, to kind of be a coach, mentor and invest in young women that were in my position.’