My 'cancer' turned out to be dermal filler

Teenager, 19, reveals doctors warned she could have cancer after she found a 1cm lump in her neck – only to discover it was ‘migrated’ £620 dermal filler

A 19-year-old student has revealed her shock after doctors warned she had cancer after she found a 1cm lump in her neck – only to discover that it was actually dermal filler that had migrated.

Gracie Andrews, from Cornwall, first had dermal filler injected in her lips just before her 19th birthday because she wanted them to look bigger with more of a pout.

The student went on to have £500 of filler injected into her jaw, cheek and chin in August 2021, before having another £120 of filler into her lips.

By December, she was shocked when she found a lump on her neck – with medics telling her they thought it was cancer, and they needed to remove it.

However after it was removed, she was told it was a ‘foreign body’, telling FEMAIL: ‘It turns out my body had rejected the filler and it had crystalised and moved to another part of my body from my face and got lodged in a gland in my neck.’

She later had other parts of the filler, which were ‘the size of marbles’, dissolved from her face, and is now keen to warn others about the impact of cosmetic surgery. 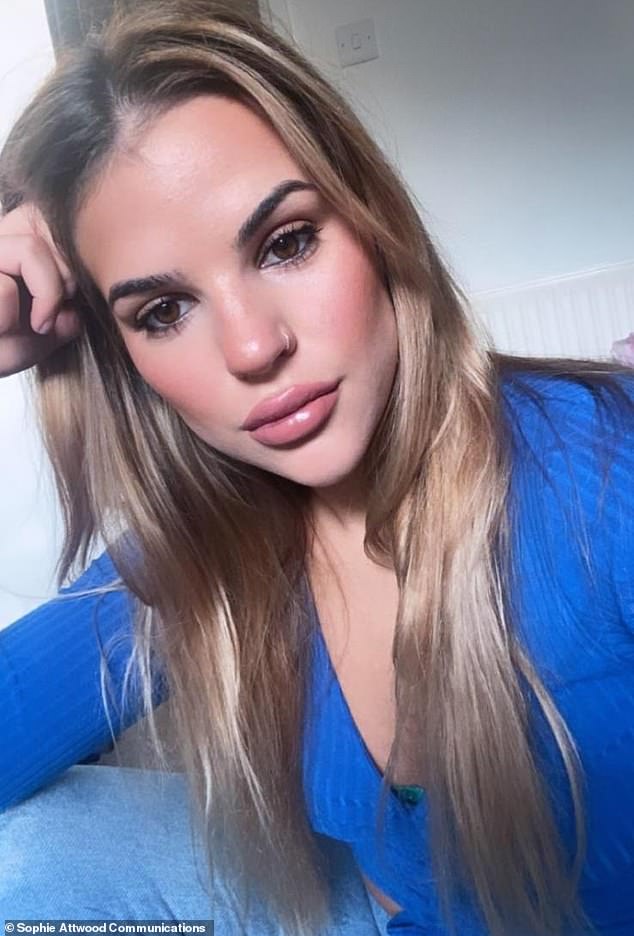 Gracie Andrews, 19, from Cornwall, revealed her shock after she was living with a lump which she believed to be cancer, only to discover that it was actually dermal filler that had migrated

Gracie revealed: ‘I first had them injected with 0.9ml ml of dermal fillers and liked how they looked afterwards. But then I just wanted more and more.

‘Five months later I got my lips done again, this time with 1ml of fillers.’

She continued: ‘Then I heard about girls getting a 5ml package of filler put in their face.

‘It was called the Kylie Jenner look and involved having filler injected into the lips, jaw, cheek and chin. 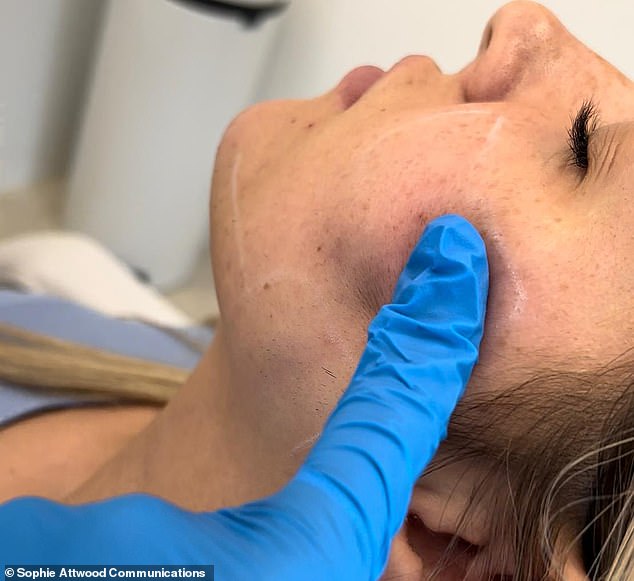 In December 2021, the teenager was shocked when she found a lump on her neck – with medics telling her they thought it was cancer, and they needed to remove it

‘I often wore my hair up when working as front of house in a fine dining restaurant, so I liked the idea of having some in my jaw for definition.’

Gracie found a practitioner who would inject her face whom she felt was affordable.

She explained: ‘It cost about £500 for all of it which I thought was an introductory offer because she hadn’t been open long.

The 19-year-old had the fillers injected into her jaw, cheek, chin in August 2021. 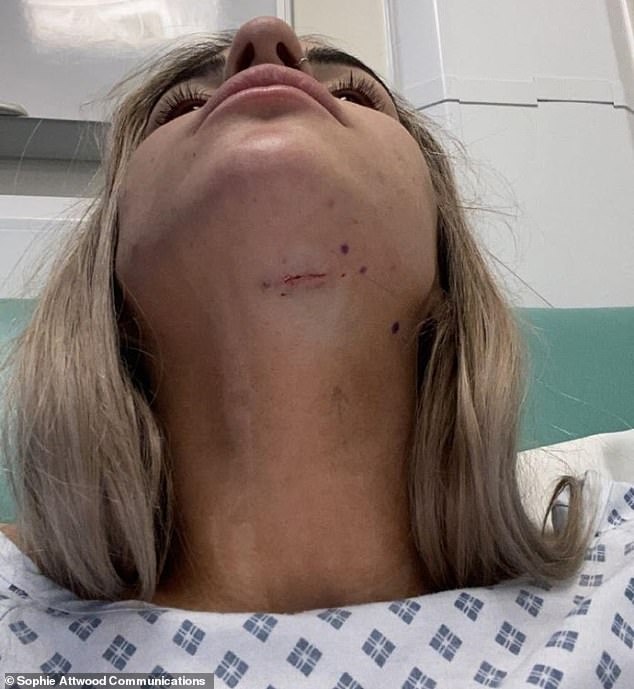 However after it was removed, she was told it was a ‘foreign body’ and doctors explained the filler had ‘crystalised’ before becoming ‘lodged’ in one of her glands

Meanwhile she went on to pay another £120 for 3ml in her lips.

Dermal fillers and lip injections should be made prescription-only to keep the public safe from botched cosmetic procedures on their faces, MPs were told last month.

Moving to a prescription model would lead to a crackdown on cowboy practitioners by making medical professionals responsible for dishing out the treatments, experts claimed.

It would require Brits to have a face-to-face consultation with a medical professional capable of prescribing, like a doctor, who would explain the risks and benefits of the procedure.

Professor David Sines, chair of the Joint Council for Cosmetic Practitioners, called for the move to apply to dermal filler injectors, which deliver various substances under the skin.

Under current rules an aesthetic practitioner in the UK does not need any mandatory qualifications, meaning anyone can go on a basic training course and then be allowed to perform dermal filler treatments.

The comments were made to MPs on the Health and Social Care Committee during a session on the impact of body image on mental and physical health.

‘We believe they should firmly become prescription only devices, because if they were then there would be a requirement for oversight from prescribers, which would provide greater protection for the public,’ Professor Sines said.

Thousands of Britons, mostly women, get dermal fillers every year, a procedure where a substance, typically hyaluronic acid, is injected into the face to fill out wrinkles or make lips and cheekbones bigger or look more defined.

The procedure has boomed in recent years as women aspire to look like celebrities like Kylie Jenner and Kim Kardashian, prompting concern from experts worried that Britons are falling victim to a largely unregulated cosmetic aesthetic industry.

Afterwards, she wasn’t happy with the results but was reassured that it was just initial swelling that would go down.

However, Gracie became concerned when the swelling didn’t go down.

She felt that her cheeks weren’t symmetrical and her jaw was lumpy looking, as well as thinking that her chin looked too long.

Then, in December 2021, she was at work when she felt a lump in her neck, close to her Adam’s apple.

She explained: ‘I was quite worried about it but hoped it would go away.’

‘By February it hadn’t so I went to the doctor. They said there was a possibility it was cancer and I was referred to an ENT specialist immediately.’

At hospital Gracie had an ultrasound, a camera in her nose and throat, and a full examination from the doctor.

The medics were unsure what it was, and ended up doing another ultrasound.

They also put a needle in her neck to extract cells to examine.

She recalled: ‘It was really painful and they couldn’t get enough cells so they did it again and referred me for an MRI scan.

‘Then the doctor warned me that they thought it could be cancer.’

Gracie had the MRI on 6 March and two weeks later they gave her a date to remove the lump.

Back at home, as she waited for the date of the operation, she felt sick and anxious, convinced she was going to die and worrying all those around her.

Finally, on April 4, Gracie went into hospital for an operation to remove the lump, which was approximately 1cm across.

She said: ‘Afterwards the surgeon came out to see me and asked if I had ever had filler.

‘When I told her I had, she said it looked like the lump was actually dermal filler, and they would send it to the lab to make sure.’

Gracie has been left with a 1cm scar on her neck, and was recently told by the hospital that it wasn’t cancer, it was actually a ‘foreign body’.

She said: ‘I felt relieved it wasn’t cancer, but worried about the rest of the filler I had had injected.’

Struggling to cope with the impact of living under the fear of cancer, and concerned about the rest of the filler, Gracie set about to have the filler dissolved.

At the end of May, she went to another clinic, Nina Prisk at Update Aesthetics, to properly dissolve her remaining filler.

Nina, an experienced prescribing aesthetic nurse, explained that all the lumps Gracie could feel on her face were filler that had been injected into glands in her face.

She said: ‘When Gracie came to me it became apparent that filler had been injected into the wrong areas of the face, something that can be extremely dangerous. 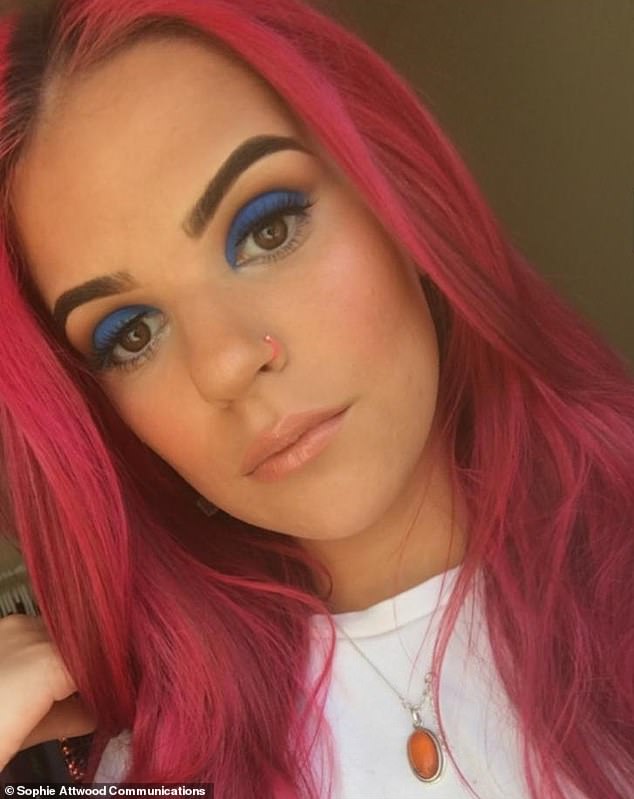 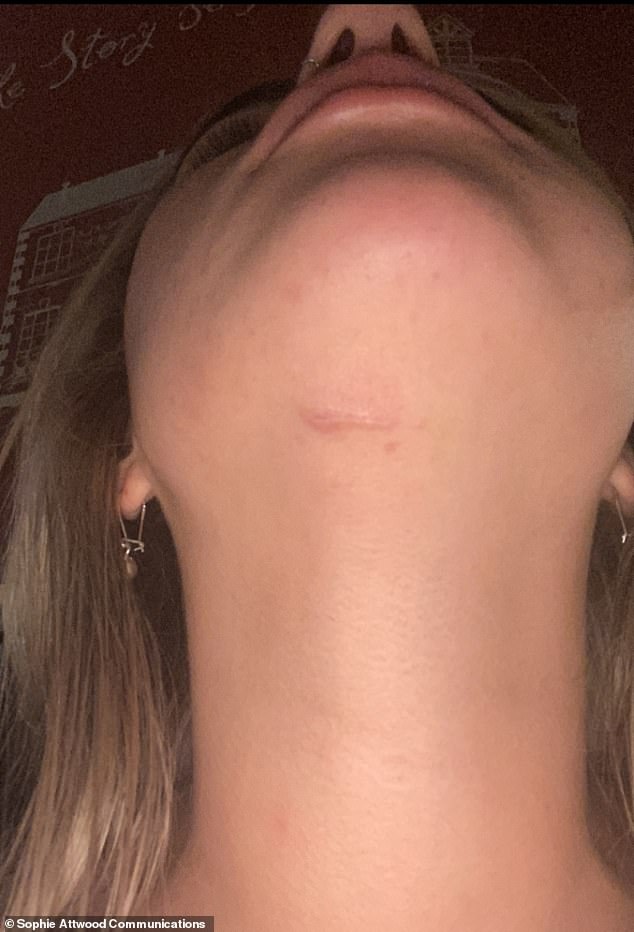 ‘I reversed the effects of the filler. The product was extremely dense and required a lot of hyalase to break it down.

‘There were huge marbles underneath her skin. This was an uncomfortable process for the patient on top of everything that she had already been through. Eventually good results were seen.

‘In my opinion Gracie never required that level of treatment in the first place.

‘As a beautiful 19 year old girl with perfectly proportioned features, it was in no way a justified treatment.

This was scandalous and purely a money making exercise for the practitioner.’

The ultra guide to having filler: Why you should always have a consultation before any work – and don’t be tempted by cheaper offers 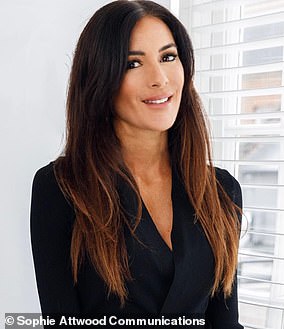 Do your research first

Nina revealed: ‘Always make sure you’re being treated by a qualified and experienced practitioner as they will be using FDA-approved products rather than cheaper alternatives that can be dangerous.’

Don’t be tempted by cheap offers

She explained: ‘Normally Botox costs from approximately £250, however this varies depending on your geographic location, the clinic and the practitioner.

‘Anything significantly under this should send warning bells.’

Don’t choose a practitioner because of their dramatic online results

Nina revealed: ‘Remember that lots of the content we see online nowadays is airbrushed and filtered.

‘The chances are, if you’ve found a practitioner online who is offering very extreme results these may not be genuine or safe.’

She continued: ‘Any legitimate practitioner will always conduct a thorough consultation beforehand in order to gain a full medical history and establish exactly what results you’re looking to achieve.’