The Nationals and the Shooters, Fishers and Farmers are scouting for candidates as they brace for a byelection in the Upper Hunter after it emerged the sitting MP offered a sex worker $1000 for sex in NSW Parliament House.

Labor would contest a byelection in the Upper Hunter and One Nation would also be expected to run, after its strong performance in the neighbouring seat of Hunter in the 2019 federal election.

Senior Coalition ministers joined Deputy Premier John Barilaro in calling for the immediate resignation of Michael Johnsen on Tuesday after the ABC revealed Mr Johnsen also sent the woman lewd text messages and an obscene video while Parliament was sitting. 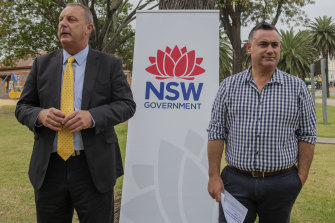 Mr Johnsen, who was forced to quit the Nationals and move to the crossbench amid a police investigation into allegations he raped the sex worker, is expected to resign from Parliament and force a byelection in one of the most marginal seats in NSW.

Mr Barilaro said he told Mr Johnsen that his position was “untenable” and his behaviour was disgusting, while Transport Minister Andrew Constance said: “He’s got to go, and he’s got to go today.”

“This type of behaviour is not appropriate in any workplace,” Mrs Taylor said.

Mr Barilaro conceded his calls for Mr Johnsen’s resignation would spark a byelection which the government may not win.

“So be it … I’d rather do the right thing than worry about majority in government,” he said.

Premier Gladys Berejiklian said she was “absolutely disgusted” by the reports.

A senior Nationals source said the party could have as many as six possible candidates, while a Shooters figure said the party had identified Upper Hunter as “one of its target seats”.

The Coalition is desperate to win the seat because it is now in minority government after Mr Johnsen and Liberal MP John Sidoti were forced to the crossbench. The corruption watchdog is investigating Mr Sidoti’s business dealings. 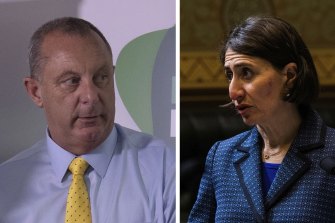 Mr Johnsen, who has strenuously denied the rape allegations, last week revealed he was the MP at the centre of the assault claims after Labor MP Trish Doyle detailed the sex worker’s accusations in Parliament. Ms Doyle did not name Mr Johnsen.

The ABC has now revealed the same woman alleges Mr Johnsen “sexted” her during question time and sent her a video of himself performing a lewd act in a toilet in Parliament House.

The ABC says it has seen hundreds of online messages and texts sent from Mr Johnsen’s phone to the woman between August and September 2019. The ABC verified the number belongs to the MP.

Mr Johnsen has been contacted by the Herald for comment.

In one of the messages obtained by the ABC, Mr Johnsen offered the woman $1000 to attend Macquarie Street and have sex in his Parliament office after a budget estimates hearing.

NSW Police have confirmed they are investigating the rape allegation and Mr Johnsen was due to speak with detectives on Friday but that pre-arranged interview was postponed.

In a statement after he stood aside as parliamentary secretary for agriculture, Mr Johnsen said he was “devastated by these allegations”.

“I am confident any investigation will conclude that I am an innocent party,” he said.