The Baby Boomers’ time at the centre of Australian economic and policy debate is ending, with the 2021 national census revealing they have been matched in number by Millennials.

The first elements of the census, to be released today by the Australian Bureau of Statistics, show Boomers and Millennials now each account for 21.5 per cent of the nation’s 25.5 million residents. 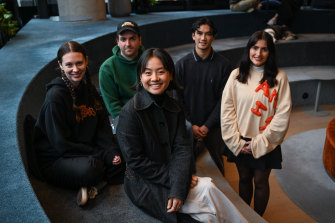 There are about 5.4 million in each generation. Just 5662 more Boomers were counted on August 10 last year.

A decade ago, Boomers – people born between 1946 and 1965 – accounted for more than 25 per cent of Australians while 20 per cent of the population were Millennials.

Australian Statistician David Gruen said the information about the changing number of people in each generation would help frame government policy over coming years.

“The data collected by the census assists governments and community organisations to understand the needs of each generation,” he said.

Boomers are much more likely to carry out care for others. About one in eight Boomers, and two-thirds of female Boomers, care for other people’s children. They are also more inclined to volunteer and provide unpaid assistance.

Millennials, born between 1981 and 1995, are still studying. They account for 40 per cent of those attending vocational education such as TAFE. Almost half of the defence force are also Millennials.

Generation Z, those aged 10 to 24, account for 18 per cent of all Australians. But in a sign of the quickly growing Indigenous population, 30 per cent of Aboriginal or Torres Strait Islanders are Gen Z.

Demi Kotsoris, a 27-year-old Millennial visiting Bondi on Monday, said her generation would shape workplaces for years to come. 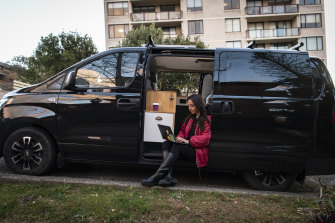 Millennial Demi Kotsoris, working from her van in Bondi, says her generation is one in limbo.Credit:Wolter Peeters

She said hers was a limbo generation shaped by the internet that wasn’t as wedded to a work ethic and loyalty as previous generations.

“A lot of the education we got taught us about how to succeed in life pre-internet,” she said.

“I definitely checked all of life’s boxes. I did well at school, I went to uni, I got a really good job. I was making good money and I was confused as to why I was so … miserable.

“I think for our parents’ generation, like when you think of the generation before us, being able to get that job from that degree was enough for them.”

The group said their generation’s access to information had allowed them to approach problems differently than their parents.

“We have had so much access to what’s happening in the world that we’re able to be more proactive than reactive,” said Hobbs, 26.

Ponton said embracing individuality was another key difference the group noted between their generation and their parents.

“Younger people that are coming into power are much more reflective of their own personal tastes,” Ponton said. “Even with things like tattoos – 20 years ago it was a big no-no to have them in the workplace … but now people don’t even think about that as being an issue.”

The group also said Millennials prioritised mental health, because of the de-stigmatisation and access to mental health services.

“We’re really lucky,” said Huo, 25. “All my friends go and see their psychologists to work on themselves.”

Australia’s overall population increased by 2.2 million or 8.6 per cent to 25.5 million between the 2016 and 2021 censuses. The number of Indigenous Australians increased by 25.2 per cent over the same period to more than 812,000.

The census also confirmed Australia is now a majority nation of migrants, with 51.5 per cent of all people either born overseas or having a parent born in another country.

More than 1 million people moved to Australia between 2016 and 2021 although almost 84 per cent of those arrived before the COVID-19 pandemic hit in early 2020.

India is becoming a key source nation for new Australians. The census showed a 220,000 increase in the number of people saying they were born in India, meaning it overtook China and New Zealand to be the third-largest country of birth behind Australia and England.

There was also a surge in the number of people out of Nepal, with the population more than doubling between 2016 and 2021.

In the first national census in 1911, almost 96 per cent of Australians described themselves as Christian. Now, for the first time, less than half the population, 43.9 per cent, identifies as Christian, down from 52.1 per cent in 2016.

Catholicism is the single largest Christian religion at 20 per cent of the population, down from 22.6 per cent five years earlier. The proportion identifying as Anglicans, who were once the most numerous adherents in the country, has fallen to a record low of just 9.8 per cent after being at 13.3 per cent in 2016.

Almost two-in-five Australians, a record high, now say they have no religion. In 2016, the rate was 30.1 per cent.

Non-Christian religions are growing but are still relatively small by overall number. The surge in Indian-Australians resulted in a 55 per cent jump in the number of people who follow Hinduism but they account for just 2.7 per cent of the population.

There has also been strong growth in Islam, but it accounts for 3.2 per cent of all Australians.

The health needs of the two generations are also vastly different. About 7.4 per cent of Boomers reported needing assistance with core activities compared with 2.8 per cent across younger generations.