Omicron snuffs out prospect of an early election

The Omicron wave has wiped out the idea of a snap election campaign as soon as next month to deliver Scott Morrison a dream victory against Anthony Albanese.

The idea of a swift and smooth race to the ballot box was always a fantasy but an early poll was an outside chance for some Liberals who believed it was safer to go to an election in March than to wait until May. 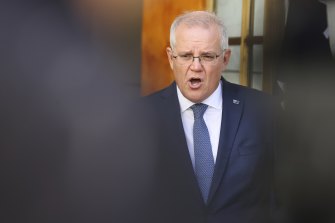 But as the Prime Minister noted on Monday, Omicron changes everything.

The Omicron summer has spread the coronavirus to at least 500,000 people, put thousands more in isolation because they are close contacts, formed endless queues at test centres and pushed out the waiting time for test results to the point where the text messages are so late they lose practical value.

It has forced supermarkets to limit some of the food customers can buy. And it has forced people into fruitless searches for rapid antigen tests at pharmacies and supermarkets, leading Australians to ask a simple and logical question: did nobody see this coming?

The Prime Minister’s assurance from late last year about the wonders of “can-do capitalism” is no help for a family trying to find out if they have Omicron when the state test centre suddenly closed and the free market forgot to supply enough RATs.

The community frustration is palpable. Morrison has tried to absolve himself over the RAT shortage by saying testing was a job for the states and territories, but that is unlikely to wash with voters who do not see such a neat dividing line between state and federal responsibilities.

It is a weak argument, in any case, from a government that has intervened in the past to ensure medical supplies and has spent money eagerly on other state and local jobs, whether it is a car park or the changing rooms at a local sports club.

Many Australians will hold Morrison to account for the summer outbreak whether he likes it or not – and that means it would be political madness to call an election after Australia Day and go to the polls in March.

While this was always an unlikely option because it assumed a summer without an outbreak, it was at least an option. On election timing, the effect of Omicron is to narrow the government’s choices.

The government hopes this wave will peak at the end of January. If that happens, there is a chance the country will emerge from this outbreak with the quick return to the economic activity it saw after the peak in the Delta strain last year.

In fact, Morrison’s fate may turn on the length of the wave rather than the height of the peak. If this outbreak is over soon, he has a chance to turn the public debate to the economic recovery with a federal budget going ahead as scheduled on March 29, with an election in May.

Morrison’s preferred option is now looking like his only option.