Overlooked No More: Rev. Bill Larson, Who Became a Symbol of Gay Loss in New Orleans

Overlooked is a series of obituaries about remarkable people whose deaths, beginning in 1851, went unreported in The Times. This month we’re adding the stories of important L.G.B.T.Q. figures.

The fire that ripped through the Up Stairs Lounge, a gay bar in New Orleans, was (and still is) the deadliest blaze the city had ever recorded. Thirty-two people perished on that day, June 24, 1973.

Their deaths, however, were largely met with indifference by public officials and much of the citizenry. The governor of Louisiana offered no public statement about the victims. The mayor was also silent, despite having spoken out months earlier about a fire that had killed six at a downtown office and apartment building known as the Rault Center. There was no day of mourning.

“The reaction to the fire itself had everything to do with anti-gay animus or at least anti-gay discomfort,” said Robert W. Fieseler, author of “Tinderbox: the Untold Story of the Up Stairs Lounge Fire and the Rise of Gay Liberation” (2018).

Images of the fire’s aftermath were horrific, with many people having been scorched beyond recognition.

“There’s only one way they’re going to identify these people. That’s by their teeth,” a worker in the coroner’s office told United Press International at the time. “God, this is awful.”

The most memorable photograph showed the charred remains of a man hanging out of a second-floor window. He had tried to escape from the flames but was unable to squeeze between metal bars in front of the window.

The man was the Rev. Bill Larson, a deacon and pastor at the New Orleans chapter of the Metropolitan Community Church.

A New York Times article published on June 25, the day after the fire, recounted how Larson “lay like a mannequin” for four hours “in view of the spectators in the narrow street below, his arm resting on the window ledge and his mouth open in what must have been a scream.”

At his funeral, Larson would be lauded for his contributions to the Metropolitan Community Church.

“He worked terribly, terribly hard for this church, to build it and keep it alive in the face of many obstacles,” one tribute said. “Oftentimes with poverty facing the church, he supported the church out of his own pocket.”

Larson was said to be a private person, but in death he became a symbol of the oppression of gays.

Larson himself was gay, and like many others of the time, he tried to hide his identity, by altering the spelling of his name, from Lairson. While most churches did not welcome the L.G.B.T.Q. community, anyone was welcome at local chapters of the Metropolitan Community Church, a gay-friendly group that has since grown to 160 affiliated churches and 45 emerging churches in 33 countries worldwide.

The Up Stairs Lounge was a sanctuary for working-class gay men and congregants of Metropolitan Community, and on the day of the fire, a Sunday, Larson and dozens more were partaking in the bar’s weekly “beer bust” event: all you could drink for a dollar. It was a jovial scene. Several men had gathered around the white baby grand piano where they would often sing show tunes and the song “United We Stand” by the Brotherhood of Men. 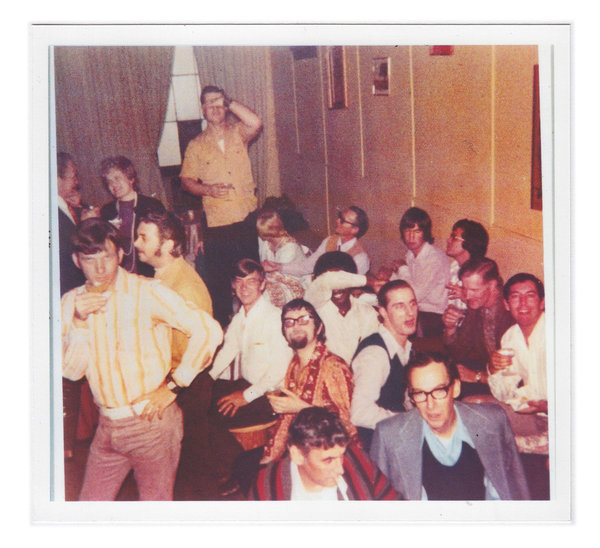 Then, just before 8 p.m., the bar went up in flames. In a matter of minutes, 29 people were dead, many of the bodies piled up against the barred windows, in what The Times-Picayune described as a “twisted, charred mass of death.” Three more would later die of their injuries.

The anti-gay jokes and slurs started almost immediately. Witnesses to the fire recounted hearing journalists, co-workers and others making cruel comments about the deaths, while survivors of the fire and friends of the victims kept quiet.

“You take that burden of pain and grief and put it over your shoulder, on a shelf somewhere in the dark up above, and you leave it there,” said Henry Kubicki, a member of the congregation. “Some turn to alcohol, some turn to drugs, some turn to God.”

Larson’s mother was offered her son’s remains, but she declined, the Rev. Troy Perry, the founder of Metropolitan Community Church, said.

“It was horrifying to find out what happened to him, how he had been treated,” Lipscomb said in an interview.

Larson’s remains were cremated, and the church kept the ashes in an urn at an altar. Later, Perry organized a memorial service for Larson and the other victims of the fire.

The gathering, on July 1, offered a rare moment of solace for people who knew them.

Mike Moreau, who lost several friends in the fire, recalled having to act as though nothing had happened “because we couldn’t come out at work.”

“So you had to pretend, ‘Oh, there was a fire? Oh, did somebody die?’ while inside there was a lump in your throat that was enough to choke you,” he said in the documentary “Upstairs Inferno” (2015). “But that was just part of the playacting that we all learned to do back in those days.”

The investigation into the cause of the fire hit several dead ends and the case has remained unsolved.

Arson was not ruled out, and a lighter fluid can was found at the scene; the police report termed the fire to be of “undetermined origin.”

A suspect was identified but never charged, and he committed suicide a year later.

The fire was the largest known mass killing of gay people in the United States until the 2016 shooting at the Pulse Nightclub in Florida that killed 49.

It has been the subject of documentaries, several books, an art exhibit, musicals and a great number of news articles. Even so, it lingers in the shadows of history.

William Roscoe Lairson was born in Estill County, Ky., on Jan. 25, 1926, the youngest of six children. His parents, Anna E. Bryant and Issachar Larison, as it was sometimes spelled, were impoverished farmers who did odd jobs to support their family. Lipscomb, who researched his family’s genealogy, found that the family referred to William as Roscoe, as did newspaper accounts and census records. And, he added, the surname Lairson was spelled in different ways. When Roscoe enlisted in the army his last name was spelled Lairson but it was rendered Larson in New Orleans.

Roscoe would never know his father; he died of alcohol poisoning before he was born.

His mother hoped to build a better life in Ohio, but some time after they moved, Roscoe’s sister Dorothy was struck and killed by a vehicle. Roscoe’s mother lost custody of her children and Roscoe, then a toddler, went to the Children’s Home of Butler County.

Larson’s time at the Children’s Home was troubled, Fieseler said.

“He’s identified as having a sex problem, where they’re constantly suspicious of him with younger boys, where they describe him as being a sissy or an artistic child. They use all sorts of words,” he said.

After completing three years of high school, Roscoe enlisted as a private in the Army in 1944 and was released in 1946, according to military records. He was believed to have worked for a time at a Champion Paper Mill in Hamilton, Ohio.

He married Nellie Cloyd in 1945, but the relationship was short-lived; they divorced in 1947.

The tribute at Larson’s funeral mentioned that he had a child who had died, but it offered no other details

Larson worked as an entertainer and a Bible salesman before finally settling in New Orleans, where he joined Metropolitan Community.

Ricky Everett, a survivor of the fire, remembered Larson as “one of those people you could always depend on.”

“You felt the love, and the words that he would speak,” he added. “They were genuine.”

In researching Larson’s life, Fieseler learned that his final burial site — a crypt in New Orleans — did not include a marker. So he joined with Lipscomb and the documentary filmmaker Royd Anderson to petition the Department of Veterans Affairs for a plaque, which was placed at the crypt last year.

When Fieseler saw it, “I sort of broke down and wept,” he said. “It’s not the biggest marker in the world but it just looks so pretty knowing that it wasn’t there and how unjust that was.”