Health care workers can expect to start getting vaccinated in March next year, Health Minister Greg Hunt has said, following news the Oxford University and AstraZeneca vaccine will start being rolled out before Christmas.

Phase three trial results of the Oxford University/AstraZeneca vaccine found it was on average 70 per cent effective, the researchers said on Monday evening. 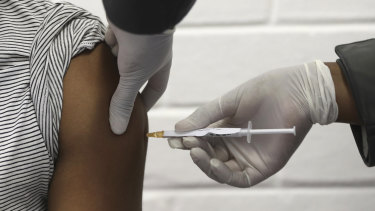 Mr Morrison said the update is another "very promising" development in the world's hunt for an effective COVID-19 vaccine.

"The advice I have is that all our contracted vaccines are on a pathway to being successful, safe, importantly, and effective," Mr Morrison said on Tuesday.

"It's my sincere hope that we're another step closed to beating this pandemic."

The AstraZeneca/Oxford University news follows updates from earlier this month which showed the Pfizer and Moderna vaccines were proving to be highly effective.

Australia has advance purchasing agreements for all three vaccines, as well as an agreement with the University of Queensland for their vaccine which has just begun phase three trials.

"The vaccine investments we've made under the recommendations of medical experts led by Professor Brendan Murphy look like they're really paying off," Mr Morrison said.

Opposition health spokesman Chris Bowen said Labor supported the government's work to secure vaccines for the country, but it would be better if there were more agreements in place.

"World's best practice is to have five or six contracts in place with various vaccine providers; we have four, because we don't know which vaccine will come to the fore most quickly and most effectively," he said in Melbourne on Tuesday morning.

"We don't yet know which vaccine will be delivered first, or with the most effectiveness but it's important that Australia has maximum access to those vaccines and whichever vaccine is most effective, and earliest."

Australia has signed on to five schemes in total, including the COVAX facility. Mr Morrison said there were enough doses in those agreements to inoculate the population "three times over".

Through the COVAX scheme, Mr Morrison said Australia would be able to access doses of other vaccines or more of the ones already included in agreements with the government.

Mr Hunt said Australia was on track to start vaccinating people from March next year, starting with health workers and then the elderly.

"Our expectation is that all Australians who seek it will be given access to a free vaccine on a voluntary basis during the course of 2021," he said.

It remains government policy that any vaccination would be voluntary, Mr Hunt said.