Passenger brought knife on flight after Heathrow security missed it

A business class passenger has revealed he accidentally carried a three-inch knife on two flights after it was missed by security at London Heathrow and Pisa Airport.

The British CEO, who wishes to remain anonymous, said he felt ‘sick’ when he discovered the blade while on the plane after going into his laptop bag to look for his headphones.

When he complained to staff at London Heathrow, he claims he was told it was down to a ‘training error’ and branded the ordeal ‘disgusting’.

He told FEMAIL: ‘I was shocked. The fact that they said it was incompetence, rather than something peculiar such as the type of bag I had, or the shape of the knife, or some other justification – but to admit a training error, which is clearly EU-wide, was appalling. 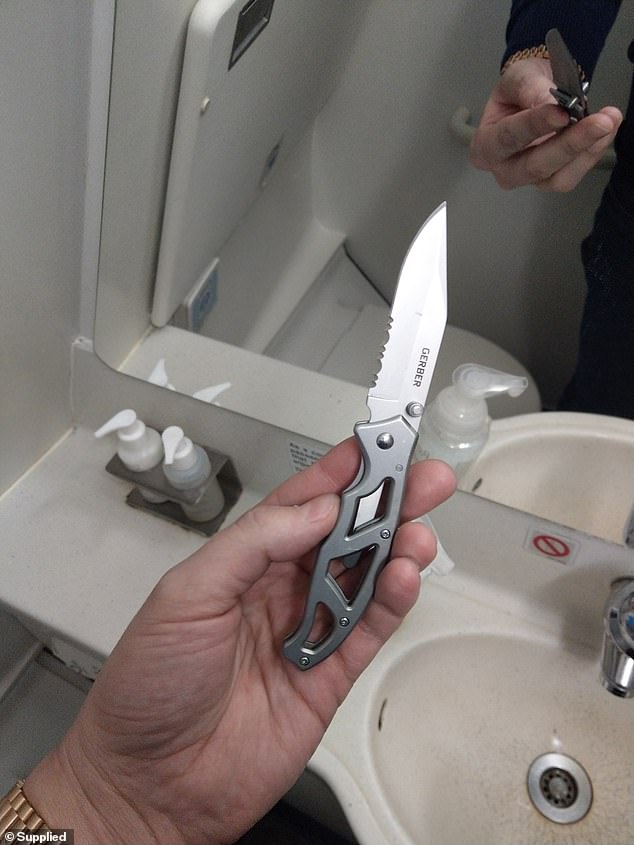 The British CEO, who wishes to remain anonymous, said he felt ‘sick’ when he discovered the blade while on the plane after going into his bag to look for his headphones

‘Does this mean that terrorists can board planes armed with knives until they actually train staff to look for weapons? The whole ordeal is disgusting.’

The CEO told how he’d first come across the knife at one of his company’s warehouses several weeks before the flight.

‘I don’t often go the warehouses, and it was after hours. I saw the knife on the packing station, clearly used for opening returns packaging as it was with the normal box cutters,’ he explained.

‘I picked it up as I knew it shouldn’t be allowed in the warehouse, and I put it into my laptop bag front pocket, thinking I’d get rid of it, but clearly I forgot all about it.’

He was then invited to a Ferrari supercar event in Tuscany, and booked a business class British Airways ticket to attend. 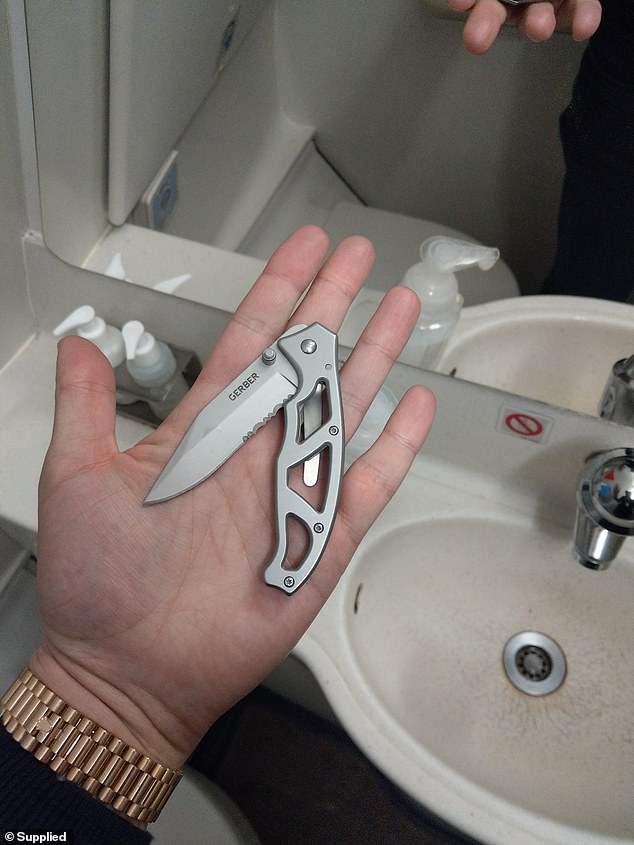 When the passenger complained to staff at London Heathrow, he claims he was told it was down to a ‘training error’ and branded the ordeal ‘disgusting

The flight departed London Heathrow’s Terminal 3 for Pisa on the morning of April 4 and returned the following day in the afternoon.

On both occasions, the passenger sailed through security without the knife being detected.

‘As it was a business class flight I went through invitation only security at Heathrow,’ he explained.

‘Security is the same for all classes in Pisa. The knife was in the front pocket of the bag, completely unobstructed. It was a lock knife with a serrated blade – it’s pretty nasty looking.’

The CEO didn’t realise it was there until his return flight, when he checked the pocket for his headphones. 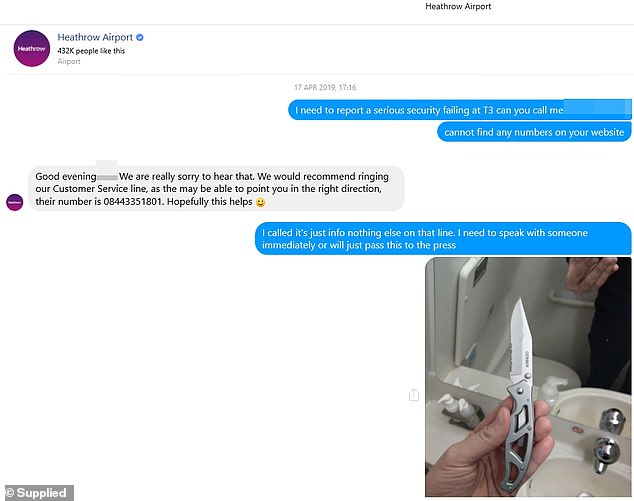 ‘I was gobsmacked when I pulled out the knife on the plane,’ he said.

‘I suddenly realised I was on a plane with a knife and I felt sick with the thought that I’d had it on both flights, having passed through security on both sides. I was disgusted.

‘I think in such a dangerous world with supposedly heightened security measures to protect us from the highest terrorism threat levels, the fact that I was able to pass through two separate airport securities and board two planes carrying a knife is disgusting.

‘This shows a complete disregard for passenger safety and clearly our skies are not as safe as we all believe they are.’

The passenger put this knife in his pocket and went into the aircraft bathroom to take a photograph. 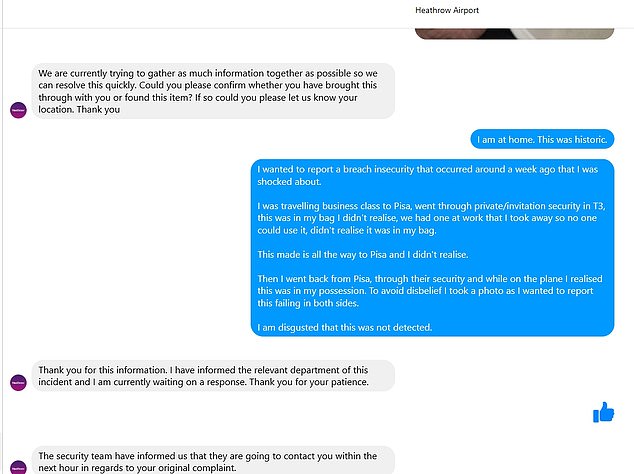 ‘I knew that otherwise, the situation would be tough for people to believe,’ he said.

He then contacted Heathrow on Facebook Messenger, having struggled to find an appropriate contact number, and sent the picture.

‘That finally got their attention and they then asked for my phone number and the security supervisor called me,’ he recalled.

‘They took the times of my travel “to find me on camera” and then they were able to load the images of the scanned bag of that day.

‘She said that the knife was visible and this was a “training” issue, and that the staff on duty would be sent for re-training.’ 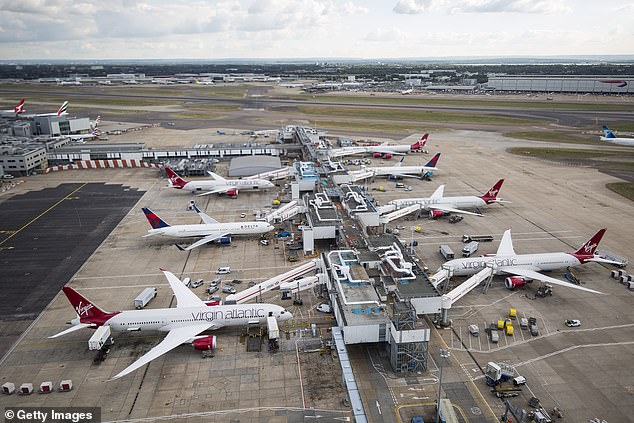 The passenger was travelling business class on a British Airways flight from Terminal 3 (pictured: a general view of aircraft at Terminal 3 of Heathrow Airport)

The passenger admitted he will no longer feel as sade in the ‘safe zone’ past airport security as he did before this incident.

‘You’d think this is the exact type of thing they were looking for when they make us all cattle through these security sections?’ he added.

‘Otherwise what are we all doing taking our clothes and shoes off and fighting with our bags? We all accept this burden and frustration because we know that the result is, once we are through, we are all safe from weapons and the plane is safe.

‘Clearly, that’s not necessarily the case, and if I was a person of bad intention, I was more armed on that plane than probably anyone else, certainly the crew.

‘Given that the pilot opened the door at one point, it doesn’t take a rocket scientist to see the risks.’

A spokesperson for Heathrow said: ‘Heathrow’s top priority is the safety of passengers and colleagues. We are fully investigating this claim and are working with our security team and the police to review the passenger’s journey.

‘We operate one of the safest airports in the world and will continue to work very closely with the authorities to remain vigilant and keep the UK’s skies secure.’

FEMAIL has reached out to Pisa Airport for comment.