When I was expecting my daughter, I bought my three-year-old son a doll, which he called "Boom Boom". He was extremely excited at the prospect of having a little sister he could play with, and I thought Boom Boom might act as a useful stand-in, giving him something he could cuddle, feed and push in a pram, while his parents were busy with the trickier task of managing a real-life baby.

And Boom Boom did end up acting as a baby surrogate, but not quite in the way I’d expected. 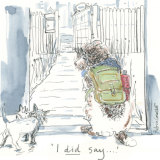 One morning, after a particularly bad night in which the new baby had kept us all awake, I found my usually gentle son gleefully burying Boom Boom under a mountain of pillows and toys. When I asked what he was doing, he smiled at me innocently and asked "Mummy, what would happen if I threw Boom Boom off the balcony?"

I thought about this recently after I discovered our dog Benny mauling the cat-bed that our two brand new kittens sleep in. Benny had grabbed the bed in his jaws and was growling and grunting and shaking it, like it was a live animal that needed killing. Which was presumably exactly what he wanted to do to the cats.

Like my son, Benny is usually a sweet and gentle soul. He loved our old tabby, Action Cat, and was devastated by the cat’s death, even though Action had frequently scratched him on the nose. For weeks after Action died I would find Benny with his head buried in the cat-carrier, sniffing and sighing in his doggie way, perhaps hoping that his friend was just hiding in there and would suddenly leap out and claw him on the snout, just like he did in the good old days.

Given this longing for a feline friend, you can understand why we thought Benny and the kittens might get along. Instead, he seems to regard them as the most terrifying creatures ever to walk the earth.

When the kittens first came into our home they were ridiculously cute, so tiny that I feared I would break their bony little bodies when I picked them up. Yet the moment Benny saw these living pompoms he began shaking uncontrollably, literally convulsing in terror, then fled the room with his tail between his legs.

Weeks later, Benny is still scared, but he’s no longer taking this kitten business lying down. He has already left two large poos in our living room, right in front of the TV, so we couldn’t miss them. And there’s a glint in his eye that suggests further protest actions might be on their way.

I try to remain calm about these stinky notices of objection, instead focusing on solving the mystery of why a dog who grew up with a cat is so petrified of kittens that are smaller than his head. In part, it seems to be the fact that there are more than one of them, but Benny isn’t sure exactly how many more. In his doggy brain they are everywhere, lurking around every corner, under every chair and bed, waiting to ambush him and do whatever terrible thing he imagines tiny kittens might do.

The new baby turned my son’s life upside down, yet his desire to throw her off the balcony didn’t last.

But I suspect Benny’s upset is mostly due to the fact that the kittens have brought change into his otherwise settled life. And change can be hard for dogs, just as it is for humans. Even though change is sometimes exactly what we need.

The new baby turned my son’s life upside down, yet his desire to throw her off the balcony didn’t last, and eventually he became the best big brother you could imagine. His sister’s greatest defender, often putting her needs ahead of his own. Of course they do squabble, and sometimes she takes advantage of his kind nature. Yet when it came time for them to move into separate bedrooms, a prospect that he’d been eagerly anticipating, he kept making excuses, asking to stay with her for just one more night. Because in the end he really did get the friend he’d been hoping for.

Similarly, I trust that Benny will eventually figure out that the kittens could be wonderful companions for him, if only he’d let them. Yes, he might occasionally get his nose scratched, but that’s the risk you take with new friends.

In the meanwhile, I embrace any small sign of progress in their relationship. For example, the other day Benny managed to gobble up some of the kitten’s used litter, and it was apparently delicious. Small steps, right?